Direct primary care is popular with doctors, not yet with patients 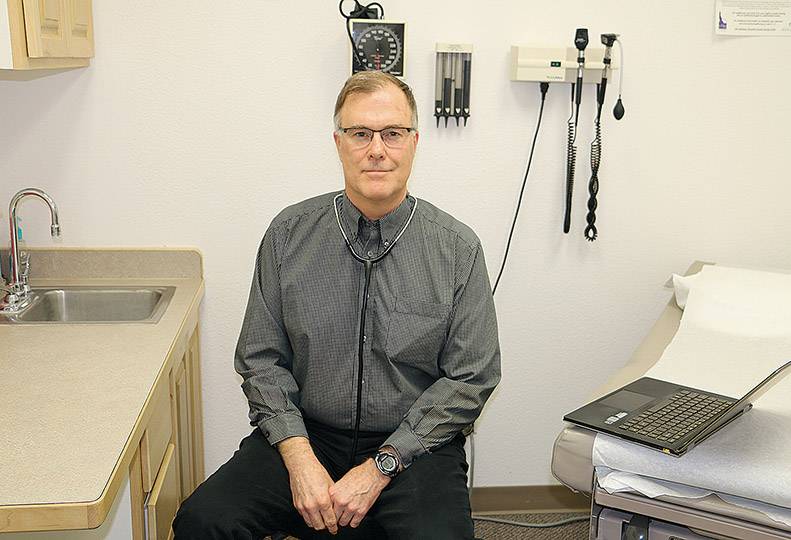 -—Kendall Heintzelman
Dr. Richard R. Samuel, a Hayden physician who operates North Idaho Direct Primary Care, says a significant benefit of his approach is that he can spend more time with each patient.

While data would indicate patient interest in direct primary health care hasn’t grown locally, it could be a trend on a national level, and Hayden, Idaho-based doctor Richard R. Samuel is taking part in that trend.

Direct primary health care, sometimes called retainer medicine or concierge medicine, is a model of health care in which a provider charges a patient a set monthly fee for all primary care services provided in the office, regardless of the number of visits, and doesn’t accept insurance.

Samuel worked at a family practice in Post Falls from 1998 to 2004, and then decided to open his direct primary care practice in Hayden.

“I was burned out with having too many patients,” says Samuel.

He says in the traditional family practice, he had a client base of about 4,000 patients, and he would see each for only 10 to 15 minutes at a time. This gave Samuel little time with his patients; on top of that, patients were wary about visiting their doctor in the first place for fear of extra charges by insurance providers. With insurance as a middle man, Samuel says it further, “distorted the doctor-patient relationship.”

Samuel says that with direct primary care, “typically 90 percent of any medical need a person would have is covered.” There is no co-pay, and fees are upfront, Samuel says. He says the other 10 percent not covered would include emergency care, surgery, and treatment of serious medical conditions, which a family practice isn’t equipped to handle.

Those costs would be covered by catastrophic insurance, says Samuel. Since, under the law, every American is required to have medical insurance, direct primary care patients can seek less expensive policies that cover only catastrophic care.

Building up a client base has been difficult, says Samuel. He says the biggest hurdle in transitioning to direct primary care is trying to educate the public about it. Television, radio, and news interviews have all benefited Samuel in getting his information out, but he says word of mouth ultimately has been his primary strategy in educating others on direct primary care.

He says he always encourages employers as well as individuals to come in for a free, 30-minute visit to learn more about his practice.

While educating the public has been an obstacle for Samuel in his practice, he has noticed an upsurge of physicians interested in this method of health care.

“I have physician’s almost weekly call and ask how to do it,” he says.

Condon says he believes this is a growing trend. He estimates that about 5,000 physicians now are providing direct primary care, and he adds that he has received many calls about it from other doctors. Condon also says the trend has been for many primary-care doctors to transition to specialized care, simply because the current model of primary care is so demanding.

While many primary-care physicians might find the direct primary care model to be a better fit for them, patient participation isn’t trending in that direction, says data from the Washington state Office of the Insurance Commissioner.

In a 2014 annual report on direct practices, the agency said total patient participation decreased statewide by 35 percent, to 8,558 patients, during the 2014 fiscal year that ended last July 1, down from 13,373 participants in 2013.

In Eastern Washington, the report says, the decline in patient counts was more precipitous. It showed that the number of direct care patients in the Spokane and Colville areas dropped to 405 in 2014 from 831 in 2013 and 1,045 in 2012. The report also says two direct-care practices closed in the Spokane area last year.

Oh a national level, however, direct primary care advocates would say that this method of health care will grow over time, or at least solve the shortage of primary-care doctors in the U.S.

In a December 2014 Time magazine article on direct primary care, Colin West, a co-director of the Mayo Clinic’s program on physician wellbeing, says the U.S. faces a shortage of tens of thousands of primary care doctors. According to a survey of third-year medical students published in the Journal of the American Medical Association, only about 20 percent of them plan to head into primary care.

Many primary-care doctors, like Samuel, who was “burned out” working the traditional route in primary care, would credit the current insurance-based health care system for the physician shortage. Kansas physician Dr. Josh Umbehr predicts in a Time magazine interview that direct primary care will bring physicians back to primary care.

“We probably talk to 10 doctors a week who are burned out, going bankrupt, ready to retire years before they ought to,” Umbehr said during the interview. “When they see they can take better care of their patients and never deal with insurance companies again … you’re going to see physicians flocking.”

Samuel agrees that this type of practice is in high demand among physicians. According to a November 2014 article in Business Insurance, lawmakers from the state of Washington are asking federal regulators to allow employers to offer direct primary care plans in conjunction with health savings account-qualified, high-deductible health plans.

One of the best aspects of direct primary care, says Samuel, is that he gets to spend more time with patients. Rather than serving some 4,000 patients and seeing them briefly, Samuel says he can focus on 400 to 600 patients.

Like many direct primary care doctors, Samuel gives patients his cell phone number and email address so they can reach him at any time, even outside of office hours. With this and the care that is already covered by a monthly fee, Samuel says patients can be more proactive with their health care. Rather than waiting to see if their condition worsens at the risk of paying extra charges, patients can have the reassurance that their needs are already covered, he asserts.

Samuel says this is also beneficial for businesses. He says having employees who are more proactive in managing their health translates into fewer sick days. He claims businesses can save up to 25 percent on premiums through his practice, and they get a 15 percent reduction in their rates.