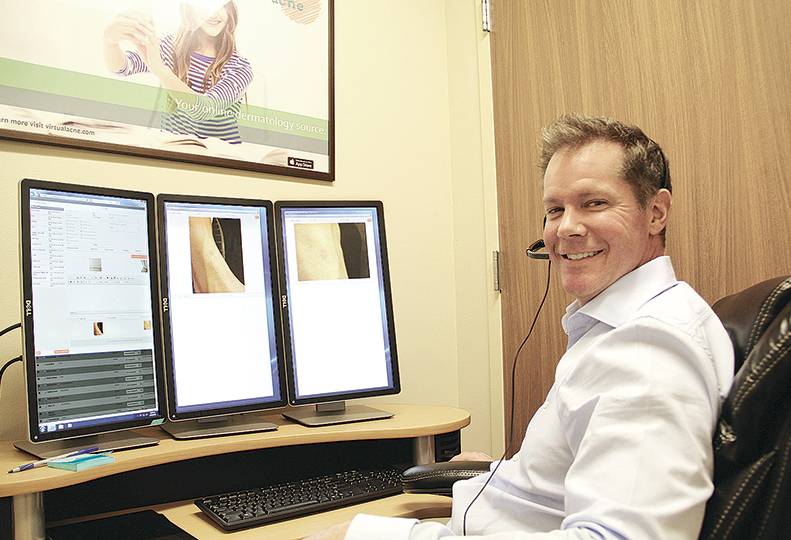 --Katie Ross
Monte Zarlingo, of Virtual Dermatologic LLC, says the startup company plans to give patients easier and faster access to dermatologists via the Internet.

Spokane-based Zarlingo, who was a part owner of the once Coeur d’Alene-based teleradiology company Nighthawk Radiology Services, is the majority owner of Virtual Dermatologic, he says. The company is co-owned by two dermatologists, Spokane-based Dr. Phil Werschler and Los Angeles-based Dr. Douglas Hamilton.

The company has one other dedicated employee, Zarlingo says, as well as some offsite information-technology contractors. The business is occupying 600 square feet of office space at 324 S. Sherman, in the same new building where Werschler’s practice is located.

The partners currently are operating one arm of Virtual Dermatologic, called Virtual Acne, Zarlingo says. The free cell phone application and website for that service went live on Jan. 2. Virtual Dermatologic’s full services are slated to launch in about a month or so, he says.

To use Virtual Acne, patients log on to a Health Insurance Portability and Accountability Act (HIPAA)-secure website using a username and password. From their account, patients fill out a full medical history and then can identify their chief complaint and upload pictures.

A patient enters a credit card number to pay for the service, Zarlingo says; the company isn’t accepting insurance at this time. The fee is a flat $49 per consult, and the patient also receives a free sample of the company’s all-natural skin care product line, Virtual Acne MD, Zarlingo says.

“That’s similar to a co-pay (in terms of out-of-pocket costs),” he says.

Virtual Acne gets a diagnosis and treatment options back to the patient within 24 hours, Zarlingo says.

The company also is considering offering a faster turnaround time, such as eight or twelve hours, in the future, Zarlingo says.

Virtual Acne also has a subscription option, he says, which costs $49 a month, and includes one virtual visit per month and the patient receives the company’s three-step skin care line once a month.

Once one of the dermatologists has reviewed the case, they can send a prescription out for the patient, Zarlingo says, and patients can use their insurance to help pay for the prescriptions.

Between the two dermatologists, Virtual Acne can treat more than 100 patients a day, Zarlingo says. He says the doctors spend between five and 15 minutes per case.

“It depends on the doctor and the case,” he says.

The company’s software enables it to store and compare a patient’s pictures over time, Zarlingo says, which will enable Virtual Dermatologic’s doctors to track their patients’ progress.

“Sometimes, local dermatologists will be sent a picture via email, but it’s not as efficient; there’s no history,” he says.

All three partners are licensed to practice medicine in multiple states, Zarlingo says; however, for now, they’re only offering the teledermatology service in Washington and California.

“We’ve built our software to be scalable,” Zarlingo says. “We’ll be able to use dermatologists wherever (to look at cases).”

However, certain states aren’t as accepting of telemedicine, Zarlingo says.

“There are several states that won’t let you diagnose without seeing the patient (in person),” he says. “The federal government is pretty liberal about it, but some states are more protective.”

In reality, telemedicine has been practiced somewhat for decades, Zarlingo says. For example, if a doctor isn’t in the office and their patient comes in, the doctor may be called or emailed the patient’s scans or tests for diagnosis, he says.

“I think that, over time, things will change,” Zarlingo says.

Another aspect of telemedicine that patients are lobbying for is to make it coverable by insurance, Zarlingo says.

“In California, insurance will pay for it,” he says.

Radiology in particular has lent itself well to telemedicine, Zarlingo says, because it mainly involves reading images that can be sent via computer.

“In the 90s, techs would be at home, they’d get a call at midnight, fire up their dial-up Internet and look at the image,” he says. “Towards the end of the 90’s, the Internet got a lot faster … then people came up with reading for multiple sites at one location,” he says.

Zarlingo got his start in teleradiology as one of the original owners of Nighthawk Radiology Services. Starting in 2001, Zarlingo was the company’s first radiologist based in its Sydney, Australia office, he says.

Because of the time difference, Nighthawk’s Australia office could provide teleradiology readings here during the night, Zarlingo says.

‘We built workflow software to work more efficiently than hospitals,” Zarlingo says. “We were reading three times more images a shift than a hospital radiologist.”

In 2004, Zarlingo sold his stake in Nighthawk and formed his own teleradiology company, Diagna Radiology, which he based in Post Falls.

After selling Diagna, Zarlingo partnered with Werschler and Hamilton to start Virtual Dermatologic and Virtual Acne, he says.

Teledermatology, Zarlingo says, offers people who are too busy or live in remote areas easy access to a physician, he says.

“It allows us to reach patients who maybe don’t have time to go to a dermatologist,” he says.

He says teledermatology also gives access to patients who may be embarrassed about their conditions.

However, some cases could require an in-person follow-up with a doctor, Zarlingo says, such as a patient with a suspicious mole that could be cancerous.

“We’re trying to increase access; a lot of dermatology can be treated with a picture and a history,” he says. “But, some lesions we may not be sure about … we may have to say, ‘That’s best off getting biopsied,’ and then we’d help them get an (in-person) appointment.”

Zarlingo says he hopes to build a referral database as the business grows, so if patients need in-person appointments, the company can point them in the right direction.

“Right now, we just try and get them in to see a local dermatologist,” he says.

Zarlingo says Werschler is part of an advisory board for a device being developed by a Canadian company called Verisante Technology Inc. The device, called the Verisante Aura, uses a laser to scan skin lesions and detect cancer cells.

“There are tools that are coming along that would make remote diagnosis of lesions possible for telemedicine, especially if those machines become portable,” Zarlingo says.

Telemedicine in general is a growing field, he says.

“Computers made telemedicine an option in the ’90s and now, there’s a lot of remote monitoring equipment out there,” Zarlingo says. “There’s tele-intensive care unit monitoring, tele-neurology, tele-psychology, and even tele-primary care … it really is starting to grow.”

Zarlingo says it would be great to have a telemedicine company that provided everything for a patient.

“Telemedicine is being used in areas people may not recognize,” he says. “As technology progresses, it’ll become more and more integrated into medicine.”

One area already branching into telemedicine is lab testing, Zarlingo says. Patients can order lab tests, take the test at home, and send the samples back for the results.

In the future, he says, he could see the company expanding into other areas of telemedicine, such as following up on at-home laboratory tests, or even veterinary medicine.

“There’s websites now where you can get tests for STDs (sexually transmitted diseases),” he says. “The next step would be to get treatment … we’re looking at stuff like that.”