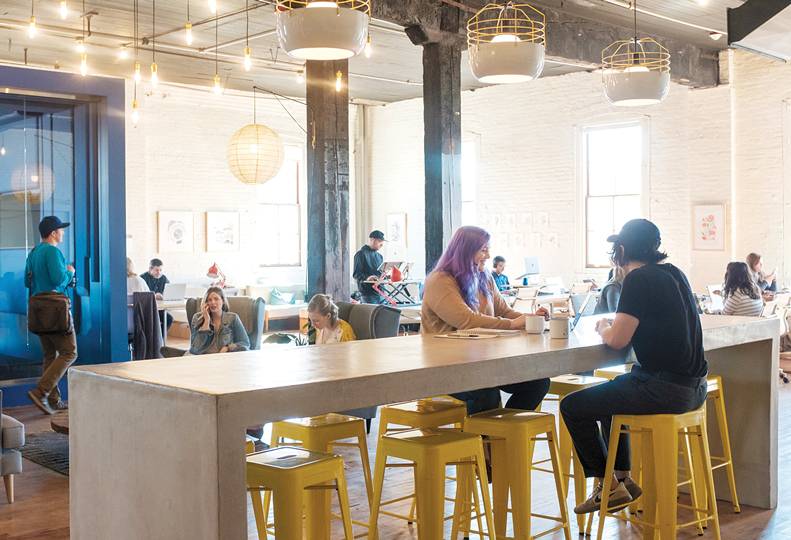 Davidson Commodities has moved to the North Town Office Building, at 4407 N. Division, on Spokane’s North Side.

“We wanted to have suites with our original buildout and we just couldn’t; it just didn’t fit in the space we have,” says Baumgarten, whose partners in Fellow Coworking are  Ben Wade and  Amanda Dixon. Dixon also serves as the community manager.

With the expansion, the company also added a few new amenities in addition to the free parking, printing, coffee, kitchen, and Wi-Fi that members already have access to, he says. Members will be able to use a new semi-private dining area and kitchenette where members can host guests.

They also will have access to a new soundproof media room, where they can record podcasts or videos, Baumgarten says.

“It’s like a podcast booth, or a place for people to do webinars that’s a little bit more soundproof and has cool background features so if people are doing video conferencing, there’s something interesting behind them,” he says. “We’ve had a couple members start podcasts, so we wanted to be able to have that as an option for people.”

The renovation also added more community space with desks and couches, including a 20-foot sectional, for informal meeting spaces or comfy seating for a change of pace.

The expansion will allow the space to accommodate anywhere from four to 16 new members, he says. Currently, Fellow Coworking, which was founded just over three years ago, has about 80 members, and between 20 and 40 people occupying the space on any given day.

The point of the space, he adds, is to build a community of people, which he believes is often missed when talking about coworking spaces, which tend to be associated with start-up companies.

“Coworking at its best is about building a community of people that are stoked to come to work every day and be around each other,” he says. “The majority of people (at Fellow) are either remote workers or they’re self-employed, and for whatever reason, they would probably be working out of a coffee shop or their basement.”

Construction on the new space began in February and was completed earlier this month, Baumgarten says.

The company will hold a soft opening of the new space for members today, and a formal opening for the public on July 25.