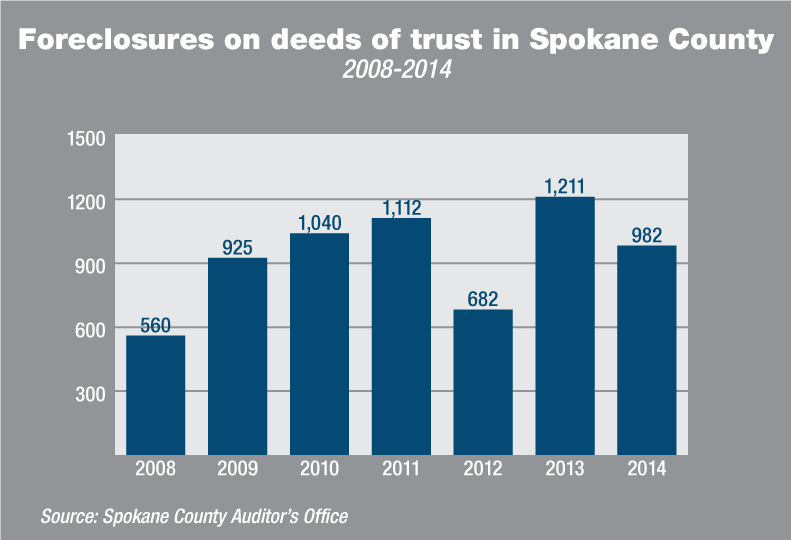 The Spokane County Auditor’s Office recorded 982 foreclosures on deeds of trust last year, down from a peak of 1,211 a year earlier, but still higher than the years leading up to the Great Recession. A deed of trust is a pledge of real property that secures a mortgage.

Phil Kuharski, a longtime Spokane economic data analyst and active member of the Spokane-Kootenai Real Estate Research Committee, says the economy continues to struggle from the effects of the mortgage crisis that coincided with the recession.

“The housing-stock situation is still under some stress because underlying economics continue to drag along,” Kuharski says.

Foreclosures might drop some more this year, but likely will stay at historically high levels unless job growth quickens, he says.

“It’s all dependent on jobs and the quality of jobs in the community,” he says. “That’s the leading domino in the effects of the foreclosure situation.”

Kuharski says employment data indicate job growth will be “tortuously slow” in the near future.

“The ability of the old-fashioned nuclear family to take on a cute little bungalow with white picket fence has been impacted dramatically,” he says. “We now have a have high number of young people living in mom and dad’s basement.”

Grant Forsyth, chief economist for Spokane-based Avista Corp., says foreclosure rates are one of the factors he tracks among other variables, including existing home prices and building permit numbers, to get a sense of the health of the housing market.

“It’s hard to know the extent that foreclosures reflect the current state of the economy,” Forsyth says. “Foreclosures might reflect the past, and perhaps they’re not indicative of the way things look today.”

He contends the housing market is in a recovery period, adding, “It’s just that the housing downturn was severe, and we’re still dealing with the overhang from that event.”

While most housing-market indicators have been moving in a positive direction since the Great Recession, lingering foreclosure actions may be weighing down overall market prices, he says.

“Distressed-property sales continued to go down, but still made up almost 17 percent of all sales last year,” he says. “It was almost 19 percent the year before.”

Bank-owned properties, for instance, sold for an average price of around $100,000, Higgins says.

“That’s got to be having some impact,” he says, referring to the slow growth in median selling prices in the overall housing market.

In Kootenai County, foreclosure actions have declined consistently the last few years, although the total foreclosure number still is higher than prerecession levels, according to data compiled for the fall 2014 Real Estate Report, a semiannual publication of the Spokane-Kootenai Real Estate Research Committee.

CoreLogic, a California-based real estate data service, recently reported that the foreclosure rate in the Spokane area was 1.4 percent as of September and trending down from 1.9 percent a year earlier, which is on par with foreclosure rates for all of Washington state.

The report showed the nationwide foreclosure rate was 1.6 percent, down from 2.3 percent a year earlier.