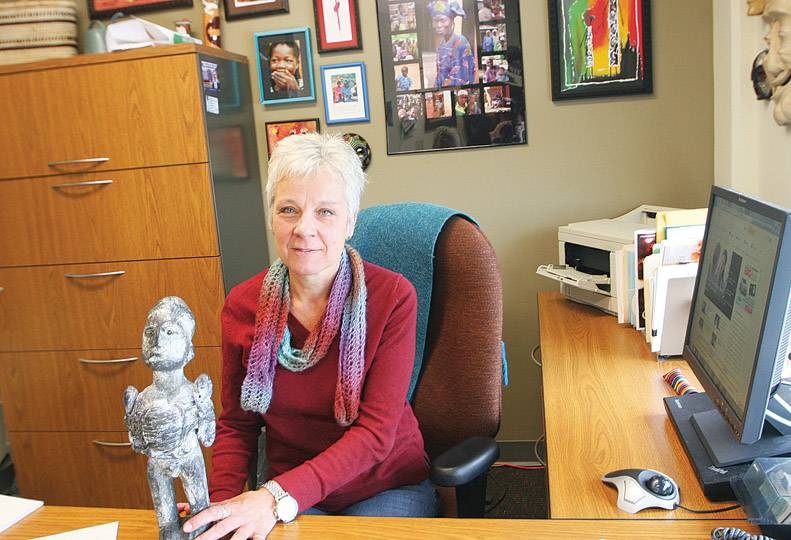 -—Judith Spitzer
Susan Norwood, nursing professor at Gonzaga University, spent three weeks in the western African country of Benin working with the staff of a new healh care clinic there.

Susan Norwood, a nursing professor at Gonzaga University, recently traveled to the Republic of Benin, West Africa, as a Fulbright Scholar Specialist to help set up a new medical clinic and teach basic first aid to staff at a “community sustainment” program in the city of Porto Novo.

Norwood received notification of the Fulbright award in September. The Fulbright program awards grants to approved U.S. faculty and professionals in select disciplines, to engage in short-term collaborative projects at eligible institutions in over 140 countries worldwide.

Norwood says the grant covered her travel expenses from Paris to Africa, and paid a small stipend. Her accommodations, meals and transportation costs were covered as well.

Benin is located on the western African coast just above the equator. It is bordered by Togo to the west, Nigeria to the east, and Burkina Faso and Niger to the north. A majority of the population live on its small southern coastline, part of the Gulf of Guinea in the northernmost tropical portion of the Atlantic Ocean. Porto Novo, the capital of Benin, is located on the southern coastline.

For nearly three weeks in October, Norwood worked with staff of a new clinic at the Songhai Center there on quality and efficiency of health care, infection control, staffing needs and development of appointment systems. The Songhai Center in Benin, founded in 1985, promotes entrepreneurship in agriculture, and is active in the areas of training, production, research and development in agricultural entrepreneurship, and agribusiness.

“It’s a coastal country, 9 degrees north of the equator, and it’s a tropical environment,” Norwood says. “So they deal with things like malaria, dysentery, and parasites.”

Norwood worked with the center’s nurses to manage projects and to develop plans to set up and manage other clinics in satellite Songhai locations around Benin.

“I visited satellite Songhai farms in Savalou and Parakou and conducted needs and feasibility assessments at each in regard to setting up a health center,” she says. “I taught four class sessions to trainees at the Porto Novo Songhai Center—about 100 students in all—two class sessions for two groups.”

She says the class topics included the prevention of work-related injuries and the importance of basic hygiene.  Parakou and Savalou, Benin, are about 150 miles north and northwest respectively of Porto Novo.

Although Benin is only 700 miles from Liberia where the Ebola crisis has taken hold, Norwood says she sensed little fear or panic about the disease in the areas she visited.

“People seemed very nonchalant about it, almost like they were in a state of denial,” she says.

While she says she saw posters in health clinics she visited about preventions and signs and symptoms of the disease, she was surprised by the lack of attention in the general community. “Ebola is not considered an imminent threat,” she says.

The country, which covers about 42,000 square miles and has a population of about 10 million, is highly dependent on agriculture and subsistence farming.

Benin was colonized by the French and gained its independence in 1960.

Norwood is also director of Gonzaga’s Study Abroad Experience and has traveled to the western African nation every year since 2007 as part of that program. She was also part of another travel abroad program, Gonzaga’s Zambezi, Zambia, Study Abroad Experience, during the 2013-2014 academic year. It is the first year she has gone to Africa supported by a Fulbright award.

On previous trips to Benin, Norwood has taken nursing students with her as part of the school’s study abroad program, to study the environment and cultural aspects of the country. Students in the Gonzaga-in-Benin program are encouraged to immerse themselves in the culture and community and to compare social factors of health and disease incidence with those of the United States. Students also participate in some type of service project, such as teaching various health topics.

The official language in Benin is French, Norwood says, but many people there speak indigenous languages.

Norwood says she loves the country and finds the people inspiring.

“They’re happy, and it’s interesting to see how adaptive they are when they have so little of what we consider necessary to live,” she says. “It’s inspiring and humbling to see that.”

Benin is known as the birthplace of the Voudoun religion, known more commonly as voodoo.

Central to the religion’s core belief is that an experience that ties both body and soul together. The religion centers on spirits and other elements of divine essence that govern the Earth, driving the forces of nature and human society. Adherents hold that the spirits of the dead dwell among the living.

“The country is largely Christian. But most people are what they call 50-50s,” she says with a laugh. “They practice Christianity by day and voodoo by night. There are voodoo stalls in the markets.”

The Songhai Center has been recognized by the United Nations as a Center of Excellence in Sustainable Development, and its model is being adopted throughout Africa, Norwood says.

She adds that she was excited to return to work with people she’s come to know during her many visits to Benin.

It’s important for people not to clump together all African cultures since all are different, she says. “Benin was colonized by the French and part of the culture reflects that,” she says. She says the southern part of Benin is largely Christian-based and in the north people tend to be Muslims.

The lifestyle there is basic, she says, adding that people cook meals over wood fires outdoors, and there is no indoor plumbing, sewage system, or much access to clean drinking water, unless people live in larger cities in Benin.

“For the most part, they believe in natural healing and natural remedies,” she says. “And it takes a while to build up trust with people. That’s a process that you need to learn. People have to be respectful of their beliefs and the resources they have.”

Hospitals there are either private or run by the government she says.

Norwood has been teaching community health in the nursing program at Gonzaga for 23 years. In Spokane, she works with several Spokane-based charities including the House of Charity, a program funded by Catholic Charities for homeless men, where she does health screenings and provides first aid.

Norwood says she has seen dramatic increases in access and availability to health care for the homeless and other indigent populations in the Spokane area.

“A lot of people in that situation are signing up and are grateful to have health care coverage,” Norwood says.

Teaching about community health care is a good fit for her because she can focus on preventive care, Norwood says.

The Fulbright Scholar Program is under the auspices of the U.S. Department of State’s Bureau of Educational and Cultural Affairs. Applications to the Fulbright Specialist Program are evaluated by a discipline peer review panel who recommend qualified applications for final approval by the presidentially-appointed J. William Fulbright Foreign Scholarship Board.

To be eligible, applicants must have a Ph.D. and substantial post-doctoral teaching and professional experience in a discipline.