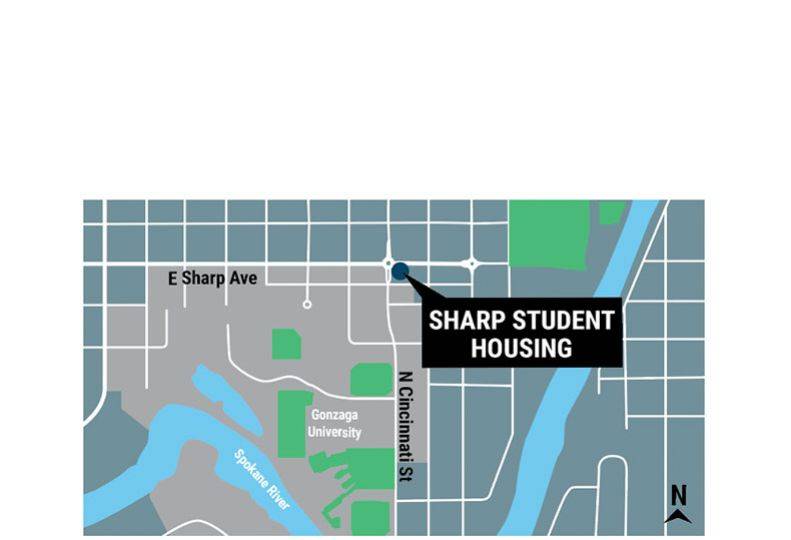 Gonzaga University has submitted pre-development plans to build a 92-bed student dormitory at the southeast corner of Cincinnati Street and Sharp Avenue, on the northeast edge of the school’s campus.

Wolfe Architectural Group PS, of Spokane, is listed as the project architect. A contractor hasn’t been selected for the project yet.

Overall, the university needs to build enough dorm-style facilities to accommodate about 700 beds, he says.

The last student dormitory built by the university was Coughlin Hall, in 2009. Coughlin Hall houses about 300 students, he says.

“This project to build 92 beds will allow us to look at our other properties and begin Phase 2,” Murphy says.

A second phase will consist of building student housing to accommodate 300 students, he says, although he declines to disclose the location of such a project.

Murphy says the university has purchased properties strategically over the years.

According to Spokane County Assessor’s records, Gonzaga purchased one of the parcels located at 814 E. Sharp, on the development site, in 2008 for $340,000. The same entity bought the parcel located on the adjacent parcel at 808 E. Sharp in March 2016 for $400,000. The university also owns the parcel at 802 E. Sharp, but readily available records don’t indicate when it was purchased.

Murphy says two houses and a duplex currently occupy the parcels. Pre-development plans indicate those structures will be demolished to make room for the dorm building.

Murphy says that over the past 13 years, the university has been focused on building academic buildings. However, with the completion last year of both the Bollier Center for Integrated Science and Engineering and the building that hosts the University of Washington School of Medicine-Gonzaga University Health Partnership, “Most academic needs have been met,” he says.

Although enrollment is slightly down this school year from pre-pandemic levels, enrollment has otherwise increased steadily since 2009.

In fall 2019, undergraduate enrollment peaked at 5,203, and declined in fall 2020 to 4,820 when the university was in remote learning and hybrid modes due to pandemic-related restrictions.

“We are slowly building our undergraduate numbers back,” says Murphy. “For fall 2022, we are at 5,072. We should be around 5,200 when we fully recover from smaller COVID classes.”

According to Gonzaga policy, the university requires that freshman and sophomore students live in campus housing unless they are Spokane residents, explains Murphy. Currently, some lower-division students at Gonzaga are living in apartments meant for juniors and seniors. Gonzaga’s policy doesn’t require the university to provide housing for all upperclassmen, as many students choose to live off campus.

Murphy says that lower-division students should be in cohort-style dormitories to enable them to have a full residential experience.