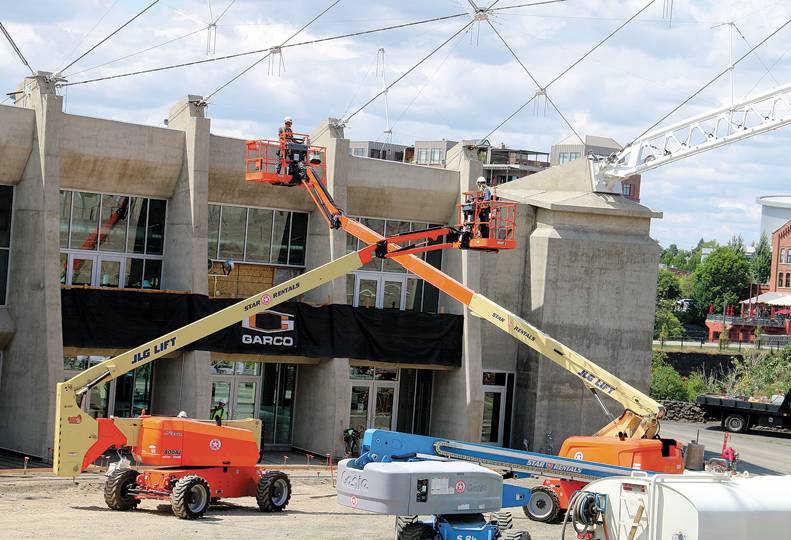 Stephen Sandherr, the Arlington, Virginia-based CEO of AGC, warns, however, “As demand for construction grows here and in many other parts of the country, more firms are having a difficult time finding enough qualified workers.”

Speaking at a media event at the Riverfront Park Pavilion active construction site, Sandherr says the Spokane area added 2,600 construction jobs between May 2018 and May 2019 – an increase of 18%, making it the third fastest-growing construction job market among 358 U.S. metro areas the AGC tracks.

In May, 17,200 people were working in construction in the Spokane area, up from a post-recession low of 10,100 in May 2011, he says, citing data derived from the U.S. Bureau of Labor Statistics.

“There does seem to be a surge in heavy construction, such as roads and bridges,” Tweedy says.

He says a perfect storm is brewing in regard to labor supply: The traditional labor supply is retiring and creating vacancies; industries are creating new jobs attracting workers; and wage competition in a good economy is driving potential construction workers to other industries.

Sandherr says some job recruitment programs here can be a model for local, state, and federal governments, and the construction-industry efforts to cultivate skilled construction workers.

John Madden, general manager of Inland Asphalt Co., of Spokane Valley, says local elected officials, school district leadership, and community organizations are partnering “to create programs and pathways into the industry where there truly is opportunity and a spot for everyone in construction.”

Madden highlights Head Start to the Construction Trades, which offers a pre-apprenticeship program with six weeks of classroom and hands-on training.

The head start program is focused on including the unemployed, underemployed, and those with barriers to entering the job market, he says. The program, which is funded by several Spokane-area support services, has tailored courses exclusively for women and has held several classes at Geiger Correctional Facilities.

“So far, we’ve graduated 175 people through the program, and 75% have been placed in jobs,” Madden says. “Despite the success of this program, we’re still short of filling our pipeline to build Spokane and the Inland Northwest in the future.”

He also says a school-based Lemonheads program, which is named for the yellow hard hats students in the program wear, is showing some early success.

Lemonheads, a partnership between the Inland Northwest chapter of AGC, the head start program, and the NewTech Skills Center, provides youth with experience and future career skills.

The program, which has construction and welding components, gives contractors the ability to hire 16- and 17-year-olds to work at construction sites.

“We’ve been putting together a summer internship program with them the last couple of years,” Madden says. “Last year, we had five kids in the program; this year, we had 12. We need to establish this throughout the region. We also need to make sure there’s awareness of these programs for kids in the area and there’s access to these opportunities.”

Citing AGC’s construction employment report, which shows 78 % of construction companies in the U.S. are challenged with finding qualified workers, Madden says his company is no exception.

“Between demographics and our market, we don’t see that changing anytime soon,” Madden says. “Currently, we have a robust construction market in Spokane.”

While work is winding down on the $181 million Amazon fulfillment center on the West Plains; the $300 million combined sewer overflow system throughout the city, and the $64 million Riverfront Park revitalization is about two-thirds complete, there’s still a lot of work on the horizon, he says.

That work includes school construction for Spokane, Mead, Central Valley, and Cheney schools worth several hundred million dollars over the next three to five years. Also, the North Spokane Corridor has up to $800 million in work planned through much of the next decade.

“We’ll really see that ramp up in the next three years,” Madden says. “The need to find skilled workers is critical.”

The construction industry is fighting a perception problem, Madden asserts.

“People see construction as a low-skilled, low-paid career, or something for those who aren’t going to go to college or can’t go to college,” he says. “That’s just not true.”

Most of the construction workers on the Riverfront Park Pavilion project, for example, are making in the range of $30 an hour plus benefits, and many of them will tack on some overtime at about $45 an hour, Madden says.

“Instead of racking up tens of thousands or even hundreds of thousands of dollars in student debt, many of these people have gone through a four-year apprenticeship program, and while they were learning, they were getting paid,” he says.

Spokane-area construction employment has been outgrowing the workforce for six years, Madden says.

“It ebbs and flows, but we’ve had good surge with some of the projects,” he says. “Where I work, we’re hiring constantly.”

Hollis Barnett, vice president of Spokane-based Garco Construction Inc., which is the contractor on the $22 million pavilion project, says, “It sure feels like we’ve got more openings than we’ve ever had here locally.”

Even with the apprentices in current training programs, he adds, “It’s going to take a few years to develop those skills.”

Sandherr says AGC has crafted a national workforce development plan that outlines a series of measures proposed to make it easier for schools, construction firms, and local AGC chapters to establish training programs and to attract more people in construction careers that pay higher wages than average nonfarm jobs in the U.S.

The plan calls for doubling federal funding for career and technical education programs over the next five years, he says. It also calls on federal and education officials to change the way they measure success of high school education.

“Instead of just citing the percentage of students who enroll in college, they also need to credit schools for graduating students who enter careers like construction,” he contends.

The AGC plan also calls for immigration reform to allow workers with construction skills to enter the U.S. legally and to include a path toward legal status for workers already in the county.

“Unless there is action soon, the construction industry in Washington and across the country will continue to face significant worker shortages,” Sandherr asserts. “These shortages have the potential to undermine broader economic growth by needlessly delaying and inflating the cost of construction and development.”