Accountants say PATH Act will make planning ahead easier for many 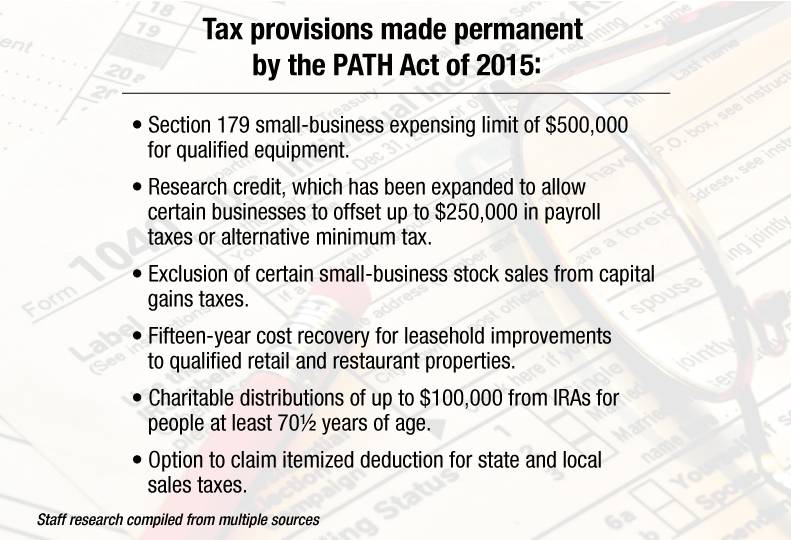 Some tax preparers here say a few tax breaks that Congress recently made permanent will enable them to have a greater degree of certainty in helping clients with tax planning.

Provisions made permanent in the Protecting Americans from Tax Hikes Act of 2015 include Section 179 expensing, the research-and-development credit, an allowance for qualified charitable distributions, and the option to deduct state and local sales taxes.

The provisions are among items grouped together as “extenders” that Congress has had to renew every year or so.

Jason Munn, a tax partner at the Spokane office of Seattle-based accounting firm Moss Adams, says the permanent Section 179 provision enables businesses to deduct up to $500,000 for qualifying business equipment purchases. Starting next year, the cap will be indexed to inflation.

“It makes it easier for people to plan,” Munn says. “They can buy assets throughout the year and know they can expense a certain amount. It gives people more of a vision of what their tax liability will look like.”

Munn says the R&D credit, which enables some businesses to write off a portion of their research-and-development expenses, had expired in 2015. The PATH Act makes the R&D credit retroactive to include 2015.

Also, starting this year, certain businesses will have the opportunity to use R&D credits to offset up to $250,000 in payroll taxes or the alternative minimum tax, Munn says.

Nick Dietzen, tax manager at the Spokane office of Minneapolis-based CliftonLarsonAllen LLP, says the R&D credit will benefit small startup companies, including software and app developers, during their first five years of operation because they can elect to apply some or all of the credit against the employer’s share of payroll taxes.

“It provides cash flow that can go back into the product or research as opposed to paying payroll taxes,” he says.

Dietzen says another provision of the PATH Act makes permanent depreciation allowances on improvements to leased restaurant and retail property.

That provision allows for a 15-year recovery period for qualified interior improvements to nonresidential property that has been in service as retail or restaurant space for more than three years.

Keith Schmidt, a partner at the Spokane office of Fargo, N.D.-based Eide Bailly LLC, says certain tax filers and the charities they support will benefit from the PATH Act provision that makes qualified charitable distributions permanent.

“It allows some taxpayers to do some fairly tax-efficient contributions to charity,” Schmidt says.

“That’s the one that I thought would have the momentum to be made permanent,” Schmidt says. “Of all of the phone calls that I get in regard to the tax planning process, I would say that was the No. 1 issue.”

Another provision of the PATH Act permanently excludes capital gains from the sale or exchange of qualified small-business stock.

Schmidt says that’s a powerful exclusion, which is meant to encourage investment in new ventures and small businesses. It applies to the sale or exchange of small businesses with gross assets of less than $50 million acquired after Sept. 27, 2010, and held for at least five years.

“The biggest piece of that legislation permanently extends the rule that eliminates small-business stock gains as a preference toward alternative minimum taxes,” he says.

Without the ATM exclusion, the benefit of the regular taxable income exclusion potentially could be cut in half, Schmidt says.

For individual filers, the PATH Act makes the deduction for state and local sales tax permanent.

Munn says the deduction gives Washington residents a break comparable to the deduction tax filers who live in states with state income taxes have.

“Now there’s more of an upside to buying a car or something like that,” Munn says of the permanent sales tax deduction. “It lends certainty to how people can tax plan.”

Not all extensions in the PATH Act are permanent.

The bonus depreciation provision, for example, was extended only temporarily. The provision, which had been repeatedly renewed to cover every year since 2008, had enabled businesses to write off at least 50 percent of the cost of qualified new equipment and improvements for the year purchased.

Schmidt says, “It looks like it’s on a trend to be scaled back. I never thought bonus depreciation was an item Congress would try to fade out, but since it made the Section 179 provision permanent and inflation-adjusted, maybe that was a concession.”

Dietzen says that bonus depreciation has been used as an incentive in down economies, while the Section 179 provision has a longer history as part of the tax code.

“I’m not surprised to see a phase-out of bonus depreciation,” Dietzen says.