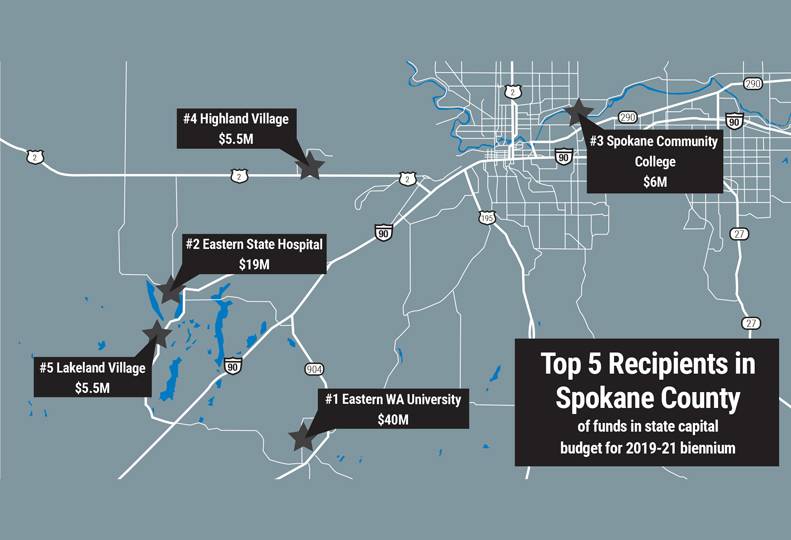 The recently passed state capital budget includes about $122 million for 65 projects in Spokane County that will get underway in the next two years.

That’s a better haul than the previous biennium, during which the state designated more than $100 million for Spokane-area projects.

The 2019-2021 biennium capital budget is separate from the Legislature’s transportation budget, which was passed April 28. That biennial budget appropriates $9.98 billion for transportation-related projects statewide, including $328 million for the North Spokane Corridor project.

In the capital budget, the largest appropriation in Spokane County went to Eastern Washington University, which will receive more than $40 million for renovations to its science building, infrastructure upgrades, and enclosure of a courtyard.

Shawn King, associate vice president of facilities and planning at EWU, says money for the science building project will fund the first of three phases of renovation at the 148,100-square-foot structure. Phase one will be design of the renovations. The university will request more funding next biennium to begin construction, he says, and will request funding for the final phase of construction in the following biennium. All told, he estimates renovations will cost more than $100 million.

“It’s one of our largest buildings, so it’s going to cost a lot to remodel the whole building,” King says. “Rather than trying to get a $100 million appropriation, we’ll just do it in smaller chunks. The state is more likely to fund us that way.”

The renovation of the building has been on EWU’s priority list for years, he says, and with construction of the $60 million Interdisciplinary Science Center next door well underway, King says it’s a good time to begin renovating the science building.

“That building is about 40 years old,” King says. “The heating and ventilation system is past its life cycle. There are some other issues regarding lab safety, just because of the age and condition of the equipment.”

About $15 million will be used to upgrade infrastructure, King says, primarily at the university’s physical plant, which creates steam and chilled water and distributes electricity to the campus.

“Our No. 3 steam boiler, of the five we have, hasn’t been operating for about the last seven years because it failed and it couldn’t be repaired,” he says. “We’ll put new controls on all the boilers, because the control systems there are in the 30-year age group and they need to be upgraded.”

Reviewing and replacing electrical wiring throughout campus is also on the to-do list, King says, as well as implementing testing equipment on the campus’ sanitary and storm sewer systems.

“We need to monitor our sanitary sewer as we push effluent out to the city of Cheney,” King says. “We’ve got a plan for consolidating some of the sewer piping so that we don’t have multiple connections to the city, and then putting automated testing and sampling equipment on those discharge points so we can track our discharge.”

Elsewhere in Spokane County, more than $19 million was set aside by the Legislature to fund projects at Eastern State Hospital, in Medical Lake. According to the state Department of Social and Health Services, which operates the psychiatric hospital, about $12 million will be used to add forensic competency restoration beds, which are designated for those charged with a crime who are found incompetent to stand trial on the basis of psychiatric disorders and who are ordered to be restored to mental competency before the legal process can continue.

Appropriations for the psychiatric hospital also include funding for infrastructure upgrades, including a new boiler plant, fire safety systems, and heating and ventilation monitoring.

Lakeland Village, a state-operated, 283-bed care facility near Medical Lake for individuals with intellectual and developmental disabilities, will receive about $5 million for infrastructure improvements.

Most of the money will be used for electrical upgrades, says Luisa Parada Estrada, spokeswoman for the Developmental Disabilities Administration, a division of the Washington state Department of Social and Health Services.

“We’d been told by the Department of Labor and Industries that the electrical system at Lakeland Village was in real need of repair,” Parada Estrada says. “Apparently, the existing emergency electrical system was installed in the ‘70s, and it didn’t meet current national code requirements.”

The project is the final phase of a series of capital projects intended to bring the facility’s electrical system up to code, she says. Circuits in some buildings will be reconfigured, an emergency generator will be installed, and other minor upgrades will bring the facility up to code, Parada Estrada says.

The Developmental Disabilities Administration had requested $6 million for Lakeland Village infrastructure upgrades, Parada Estrada says, but she says that the appropriated $5 million will be sufficient to complete the needed work.

•$2 million for a reclaimed water project for the city of Cheney.

•$2 million to the Washington State Department of Ecology for Eastern Region office improvements and stormwater treatment.

•$1.2 million to Spokane County for the Mica Peak north acquisition.