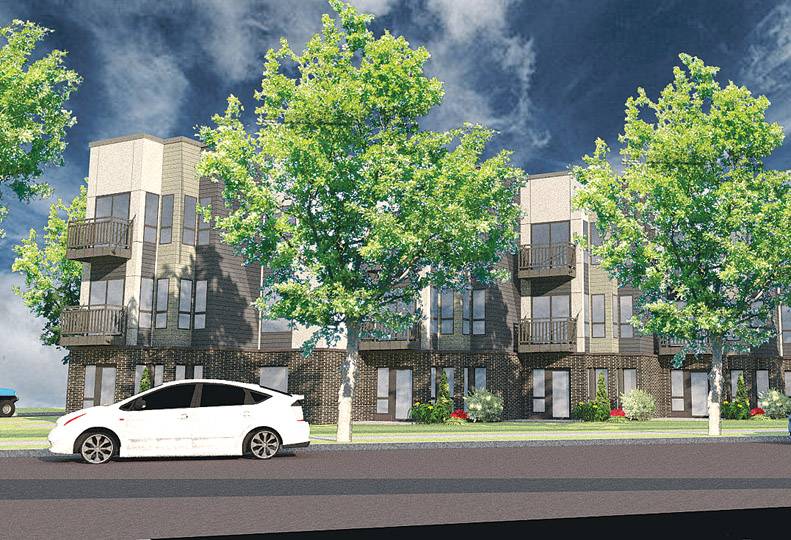 -—Fusion Architecture PLLC
Kettrick Properties LLC, of Seattle, plans to start work this spring on this apartment complex at 317 S. Coeur d’Alene, in Browne’s Addition. The project is expected to be completed next year.

Kettrick Properties LLC, of Seattle, plans to develop a $2 million, four-level apartment building in Browne’s Addition, says Rex Anderson, principal at Fusion Architecture PLLC in Liberty Lake and the designer for the project.

A contractor hasn’t been selected yet for the project, which is located at 317 S. Coeur d’Alene, Anderson says.

The 28,000-square-foot building will have 21 living units on three floors, and one story below grade for a parking garage, Anderson says. Two houses that were converted into apartments currently are located on the site, and they will be demolished to make way for the new structure.

“There will be a mix of unit types, as small as a studio up to two-bedroom apartments,” Anderson says.

Anderson says the design of the building integrates the historical elements of the neighborhood.

“We’re trying to incorporate as many traditional elements as we can with this building,” he says. “We’ve got a lot of old-style brick, and the way the apartments step along the angled property line creates a row-house effect.”

Construction is slated to begin this spring and wrap up next year, Anderson says. Gokey Engineering, of Spokane, provided services on the project.

“(Jason Kettrick) has owned property here for 15 years,” Anderson says. “He went to law school in Spokane, and now lives in Seattle.”