Developer has built throughout the West, but maintains his GU roots 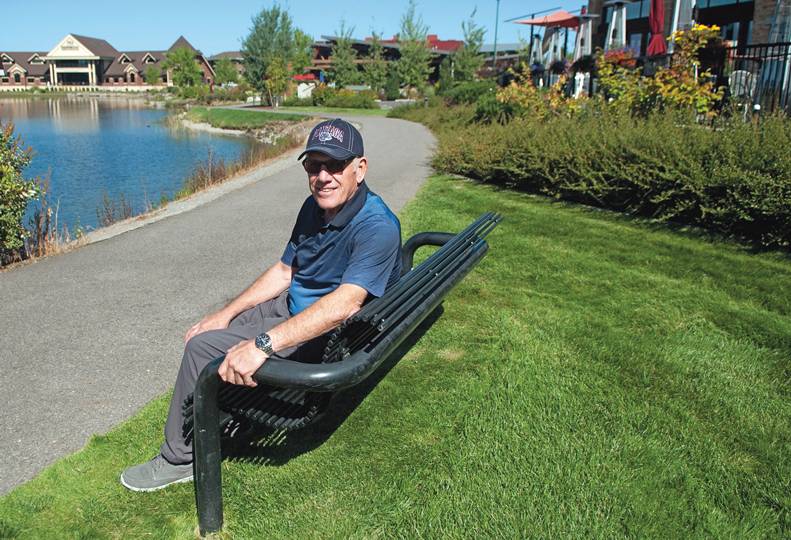 Now on his third attempt at retirement, longtime real estate developer John Stone says he has no intention of slowing down.

"He's just one of those who will always need something to do," says Nikole Cummings, of Riverstone Holdings LLC.

Cummings went to work for Stone about 15 years ago after they met at the restaurant where she was waitressing at the time, she says, and he offered her a job. Stone pushed her to grow professionally and personally, she says.

Describing Stone as a compassionate man who always goes above and beyond for others, she adds, "He owns the room when he's in one. He's one of those people that a lot of other people are intimidated by, but as soon as you sit down and talk to him, he's very welcoming and supporting."

Tenacious is another word that could be used to describe Stone, 76, a man who at 63 ran his first half-Ironman and a full the next year, and who spent 20 years developing a 160-acre development in Coeur d'Alene that he originally believed would only take him seven.

Stone completed the half Ironman in Carlsbad, California, when he was 63, and a year later, the full ironman in Coeur d'Alene. Twelve years ago, he did the Ironman Canada, says Mike Flynn, retired publisher of the Puget Sound Business Journal and current head of Mike Flynn & Associates LLC, of Seattle, a consulting company.

Flynn and Stone grew up in the Spokane's Logan neighborhood, though they were about five years apart age wise, with Flynn being the elder of the two.

"From the time we were in grade school at St. Al's, I always had the sense that he accomplished what he set his mind to," Flynn says, so it was no surprise to Flynn when he learned that Stone was training for the Ironman competition.

"I knew at that point that it would happen, so I called him occasionally, frequently found him on the bike or running."

Stone got his start as a systems analyst for Boeing Co. where he worked for nearly 10 years before moving on to teaching at North Idaho College while running his private business, the Computer Service Bureau, on the side.

It was during this time in the late 1960s that Stone also dove into the ministorage development business.

"I used to build tree forts when I was young and loved the idea of working with my hands, so I always seemed to have a construction project," he says.

Stone says he took the profits from the Computer Service Bureau and invested in land in Coeur d'Alene before traveling to Sacramento -- where the ministorage business was starting to take off -- to see what it was all about.

"I joint-ventured with another teacher and Tom Tilford from Spokane," he says, and the team built its first ministorage in Post Falls. He adds after building three more in Spokane with Tilford, he quit North Idaho College and took on development full time.

At its pre-Great Recession high, the company was working on some 64 projects at one time, Stone says. Some of his favorite projects include Google's headquarters in Kirkland, Washington, which the company still owns; and a retirement community near the University of Washington that houses both seniors and graduate students. SRM also did work on the Pete Gross House, which is owned by the Fred Hutchinson Cancer Research Center in Seattle, he says.

"I'm not afraid of risk or change," says Stone. "In business, those are two important assets to have - to be willing to change what you're doing and to not be afraid to take a risk."

Stone is also the man behind the 160-acre Riverstone urban village, in Coeur d'Alene, a roughly $450 million development that two decades to complete, he says.

"I thought it would take seven years to complete, but because of 9/11 and the Great Recession, it took me 20 years," he says.

Ryan Martin, owner and partner at Idaho Retail, another company founded by Stone, adds, "He's a very intense businessman. When he has a goal, he doesn't let people tell him no. He'll find a way to get it approved."

Martin, who has worked with Stone for 21 years, adds that Stone is good at motivating people and acted as a mentor to him.

Following the recession, Stone decided to take a step back from SRM.

"It was tough times for everybody, so we slowed down," he says. "About that time, I went over to Coeur d'Alene and decided I would focus more on that and not SRM."

Today, with all of his entities combined, Stone has done about $1 billion worth of development.

Stone officially retired from SRM in late 2010. He adds that he sold all of his interest in the company about 10 years ago. McGonigle and Rivard still run SRM. Bryan Stone retired from the company in 2016.

"Both of my sons are retired now; they beat me to retirement actually," says Stone. "I've retired three times and it doesn't take very well with me. I'm still active in other things."

Stone still runs the Riverstone project and has invested in several local technology startups. Included is Pacinian, a producer of touchscreen, keyboard, and touch pads that was acquired by Synaptics in 2012. The founder of Pacinian, Cody Peterson, then worked with Stone on Coeur d'Alene-based micro-LED manufacturing company Rohinni.

"I raised $17 million for a company called Rohinni, which is now a pretty amazing company," Stone says. "They're working in the consumer electronics space at Riverstone, developing backlighting technology for things like TVs and displays."

Stone previously held a position on the company's board and is still active with the company because of his investments.

"There's quite a bit of work just to keep up with what's going on there because technology moves so fast," he says.

He adds, "I would just encourage people who think they've got an idea to just do it, just go for it. Our society really protects people, and with all the unemployment and welfare, nobody's going to starve to death in the U.S. … There's a lot of opportunity every place, all the time, people just have to find it."

Outside of business, Stone says he's been taking golf lessons with the goal "to shoot my age in golf" and still remains athletically active with bike riding, which harkens back to his days competing in triathlons, including Ironman competitions.

His parents divorced when he was young, Stone says, and his family moved to Spokane when he was about 2. Stone has three sisters and was raised by his mother.

In the part of the Logan neighborhood sometimes called Little Rome or Little Vatican, in the shadow of St. Aloysius church, Stone attended Gonzaga Prep and later Gonzaga University.

"I was anchored to the 'hood there," he says.

His mother was a beautician and ran her business out of their home, he says.

He adds that Gonzaga University has since demolished their house and built a dorm where it once stood.

Those connections remain, he adds, noting that he has served on the boards for every school he attended in the area.

Stone was asked to head the fundraising effort for the McCarthey Athletic Center on Gonzaga's campus, and worked with the Spokane community to help raise $6 million out of the $26 million total needed for the facility. He also still holds eight season tickets to Gonzaga basketball games.

"I saw my first Gonzaga U basketball game when I was about 7 years old because I lived right next to the campus … that was our playground," he says. "We would go over and sneak into the gym at night and play basketball."

Cummings adds that Stone is involved in the local community philanthropically and helped her to set up her own charity to benefit research and treatment for Lou Gehrig’s disease, also known as ALS, after her father died from the disease. He also still donates to St. Aloysius and helped raise funds for Gonzaga Prep, she says.

While on the board at Gonzaga University, Stone notes he had a reputation of butting heads with Spokane leadership at the time when he and other business and community leaders worked to develop a medical research and education hub in the region.

"Part of what was going on there is Spokane had been built on the extraction economy, and the new technology economy was coming in, and because of my background in computers and technology, I tried to pull them in that direction," which wasn't always well-received, he says.

Stone and other business leaders felt public funds were being directed toward unneeded projects, he says.

He founded the Greater Spokane Symposium Series with the intention of attracting technology and high paying jobs to the region, and is one of the founders of InTec, the Inland Northwest Technology Education Center, in Spokane.

"I couldn't be any more grateful about the life I've lived and the fun I've had along the line," he says. "My last paycheck was in 1976 when I left North Idaho College to get into business with myself, and it's been a fun ride."