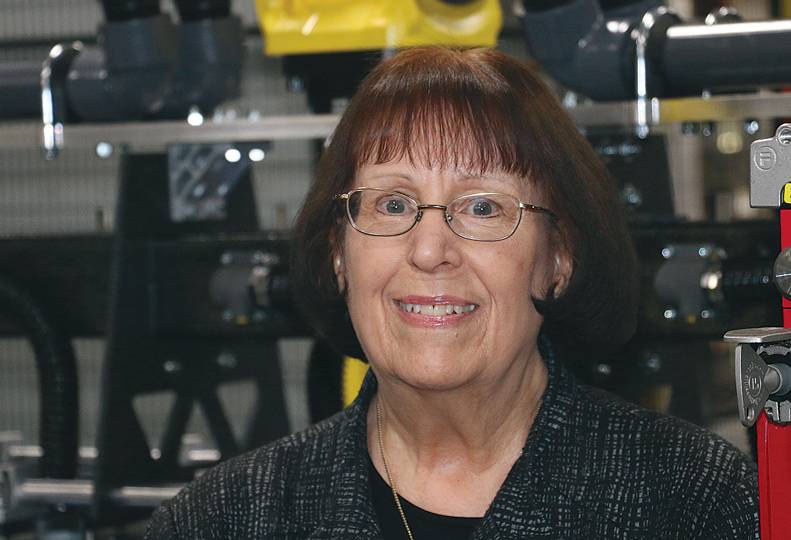 Though founded by a man in the predominantly male world of manufacturing, West Plains packaging equipment manufacturer Pearson Packaging Systems has a long history of being run by women.

And arguably, none played a more influential role than Pam Senske, the third child and only daughter to company founder Reinhold Albert “Lefty” Pearson.

More than just helping to turn the company’s finances in the mid-1980s, she turned the entire culture of the company around, says her son, Michael Senske, who succeeded his mother as company president in 2003.

“She created a great environment where people felt valued,” he says. “What I’ve heard over the years is that people appreciated the fact she was here to make everything better.”

In the mid-1980s, Pam Senske was elected to the board of directors for the company—still R.A. Pearson Co. then—at a time when the future of the company was in doubt. At the time, her mother, Alma Pearson, was president of the company. Pearson was the widow of Lefty Pearson.

“I told my mom I would like to help out for a month or so, talk with managers ... get an idea as to what’s going on,” she says.

Senske familiarized herself daily with the company. She listened to individual managers and collective management teams as they shared their daily observations about what had become mounting frustrations.

A picture developed that revealed a company that was in desperate need of more formalized processes, she says.

At her request in the first half of 1986, the company’s director’s board approved $200,000 in funding for a consultant to implement automation software in key parts of the company, something that was becoming the norm for the manufacturing industry then.

Senske was part of a team of a dozen people who were charged with making the company more efficient.

“It essentially automated what had been manual processes – like trying to balance inventory – and it allowed employees to be more effective in other areas,” she says.

“One of the first things we did was require the sales department to tell all of their customers what the real ship date was going to be,” she says.

Senske, now 73, was born and raised in Spokane. She graduated from Lewis and Clark High School in 1964. She attended Whitman College in Walla Walla, Washington, for two years before transferring to Washington State University, in Pullman, Washington, where she earned her bachelor’s degree in psychology.

“I worked during the summers for my dad all through college,” she says.

After college, she married Michael Logan Senske, a son of Bill Senske, who founded Spokane-based lawn, tree, and pest-control company Senske Services. The couple moved to Cincinnati where Michael was sent as a public health service worker in conjunction with his military service.

Pam Senske secured a position working at a mental health facility. After two years there, the couple returned to Spokane.

Michael Alan Senske was born in 1970 and his brother Andrew, who is a co-founder and president of Spokane-based medical device company CPAP-Supply.com, was born in 1973, she says.

Family patriarch “Lefty” Pearson founded the R.A. Pearson Co. in 1955. He owned and managed the company until his death in 1971, after several years of battling cancer. Before starting the company, he served as the bottle shop superintendent for Spokane’s Bohemian Brewery.

“I was 8 when my dad was working on his first invention,” Pam Senske says. “Because it was in our house, I really got connected to it. My brothers weren’t really that interested, so I was the one dad always took to the shop.”

Pearson is credited largely with developing the automated process of building the old six-pack bottle carrier, which once was made of more sturdy chipboard. Up to that point, those carriers mostly were made by hand, she says.

Senske says Bohemian Brewery bought Pearson’s automated machine. As a courtesy to his employer, he offered them the opportunity to secure the patent. When the company declined the offer, not long after, Pearson obtained his own patent and started his own company.

Alma Pearson took over the company as president from 1983 until 1992. The company changed its name to Pearson Packaging Systems in 2002.

The company is located at 8120 W. Sunset Highway, where it continues to grow. The Journal reported at the beginning of 2011 it had 134 employees. That figure increased to 200 by May 2016 and is now at roughly 250. The company doesn’t disclose annual revenue, Michael Senske says.

Though being run today by one of the founder’s grandsons, two key senior positions are occupied by women. Andrea Zaman is the company’s CFO, and Karen Covelli is transitioning to the position of assembly director that was occupied by Rick Daily for almost 40 years before he retired recently, Senske says.

“I think that because two women were running this before me that yes, the culture of the company has been more accepting of women in key leadership positions,” he says.

Michael Senske says he strives to be respectful of his mother’s time in retirement in recent years and sometimes avoids conversations about the company.

Even though Pam Senske left the company leadership nearly two decades ago, current employees who worked during her tenure still ask her son to extend their regards.

“Pam is revered, and everybody loves her,” Michael Senske says. “I don’t think people are going to remember me as fondly as they will her. And that’s okay.”