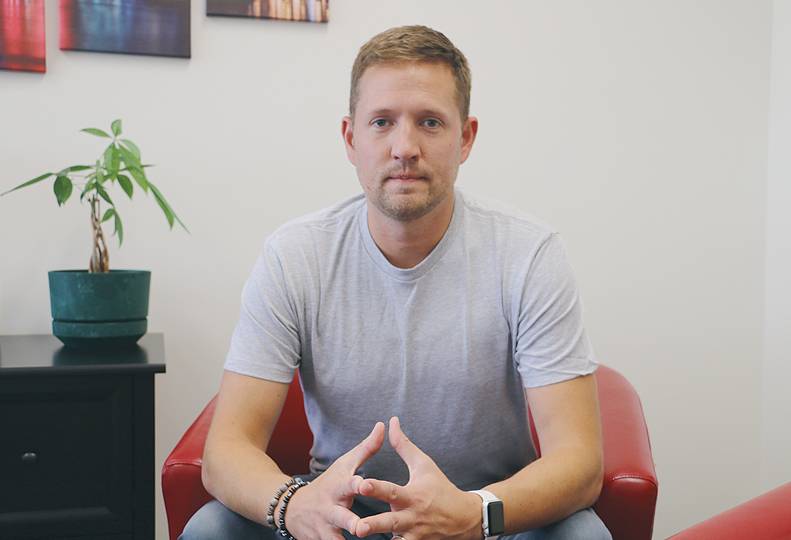 Joe Gellatly has what he calls a “heart for entrepreneurship.”

“The most rewarding part of my job is being part of the start-up community here in Spokane,” he says. “I’m always excited to meet, interact with, and encourage people who are taking chances and starting new things.”

Gellatly, 39, is the co-founder and CEO of Medcurity Inc., a Spokane-based medical records tech company that began as a startup idea.

“In my early career, I did a lot of work with IT sales and tech support, which I believe helped me gain perspective and the ability to communicate with people working in all aspects of technology,” he says.

While he’d always dreamed of creating a startup, it wasn’t until July 2018 that Gellatly and fellow co-founder Amanda Hepper pitched Medcurity to Mind to Market LLC, the idea-stage accelerator and investment fund created by Spokane-area investors to support start-up companies.

Hepper describes Gellatly as mature beyond his years.

“He’s able to absorb information and articulate it really well to the level of the audience he’s speaking to, which is quite a skill,” she says.

His contributions to the community go beyond the company they co-founded, she says.

Hepper points out that Gellatly is a longtime board member of the Community Health Association of Spokane.

“He joined because he wanted to learn about all aspects of health care,” she says.

He also supports other entrepreneurs and is quick to say yes to coffee meetings with others seeking business advice, she adds.

When it comes to guiding a startup company, Gellatly says it’s important for founders to have a strong vision, while also choosing employees for their team who are self-starters.

“In a startup, there’s no road map yet, meaning we’re all looking to experiment and find creative solutions for problems,” he says. “There’s also not a lot of time for micromanaging, so you need people who understand the end goal but are willing to blaze a trail to get there.”

Gellatly says Medcurity’s platform is now being used by about 40 clients across 150 locations, to conduct security risk assessments as well as track remedial actions and progress throughout the year.

The company, which has 12 employees, has grown enough recently that it moved its headquarters from a small downtown office to a 2,000-square-foot space in the Garden Court office building, at 222 W. Mission.

“We’re expecting to hit new milestones in the next three to six months, with new roles opening on both our sales and development teams,” says Gellatly. “This year, the pandemic presented some new challenges, but we’ve worked through them, and it remains a very exciting time for us.”

Gellatly says those new investments will be used to grow the company’s sales program, as well as develop a training program that will allow clients to teach managers and employees within their companies about HIPAA requirements.

Tom Simpson, prominent Spokane entrepreneur and manager of venture and angel investment funds, says Gellatly has a combination of market intelligence and vision for his company.

“In the startup world, you can’t attract investors and raise capital unless you’re able to telegraph that you’re a leader and you know how to execute your vision,” Simpson says. “He also has what I would call a quiver full of entrepreneurial talents.”