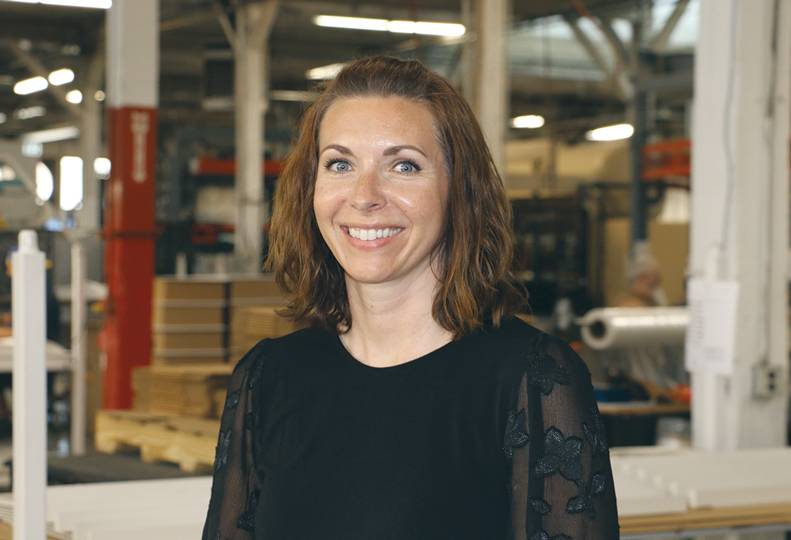 Rochelle Marsh’s most vivid childhood memories of going into Multifab Inc., the company her father Tim Smith founded in the 1980s, involve hanging out at her favorite pop machine and riding forklifts around the warehouse.

“I really didn’t know what he did,” Marsh says as she recalls those early visions of the Spokane Valley-based company.

Now 37, Marsh says she never envisioned as a youth going to work at the company, let alone one day becoming the chief financial officer at the tier-two aerospace manufacturer located at 3808 Sullivan Road, in the Spokane Business & Industrial Park.

But such detail didn’t matter to Marsh, who says all she cared about after graduating from Central Valley High School was hitting the “bright lights” of Seattle.

But what hit her were gray skies. She returned after three months.

“It was gloomy and rainy, and the people weren’t as friendly,” she says.

Marsh returned home to earn her associate degree in general studies from Spokane Community College, an undergraduate degree in accounting from Eastern Washington University, and an MBA from Gonzaga University.

She secured employment at Schweitzer Engineering Laboratories Inc., in Pullman, Washington, and worked as a cost accountant from 2006 to 2008.

Her desire to return home again coincided with the fact her father expressed a desire to “have a fresh set of eyes,” on Multifab.

“There was never any pressure or talk about coming to work for him,” Marsh says.

She went to work at Multifab and has been there ever since.

“I didn’t really know what to expect or what direction the company would go in,” she says.

In his nominating letter of Marsh, Multifab account manager Richard Crowder writes of her, “She is an incredible long-term thinker and strategist. She doesn’t even take credit for what she does here.”

Crowder adds, “She’s doing what she can to take Multifab to the next level of success.”

In 12 years at Multifab, her tenure so far is bookended with the Great Recession of 2009 and COVID-19. In both instances, manufacturing has been impacted, Marsh says.

Multifab has 200 employees, and although the company has been able to avoid permanent and temporary layoffs, work hours have been reduced to adjust to reduced revenue.

“Manufacturing, and specifically manufacturing in aerospace, has been hit hard,” she says. “We’ve seen a lot of industries change. It’s been a wild ride. But it’s times like this when we have to ask, ‘How can we transform and do better?’’’

She’s married to Justin Marsh and has an 8-year-old boy named Isaiah and a 5-year-old girl named Violet. She says she doesn’t give much thought to the fact she’s a woman in a C-suite position in a sector of the economy that has historically been operated by men.

“It’s always been something that I’ve done,” Marsh says matter-of-factly. “I just view it as a normal occurrence.”

Marsh says she enjoys the vantage point at the company her father built.

“I get to see so much. It’s cool to see everything working together,” she says. “I’d still like to be here in another 12 years.”