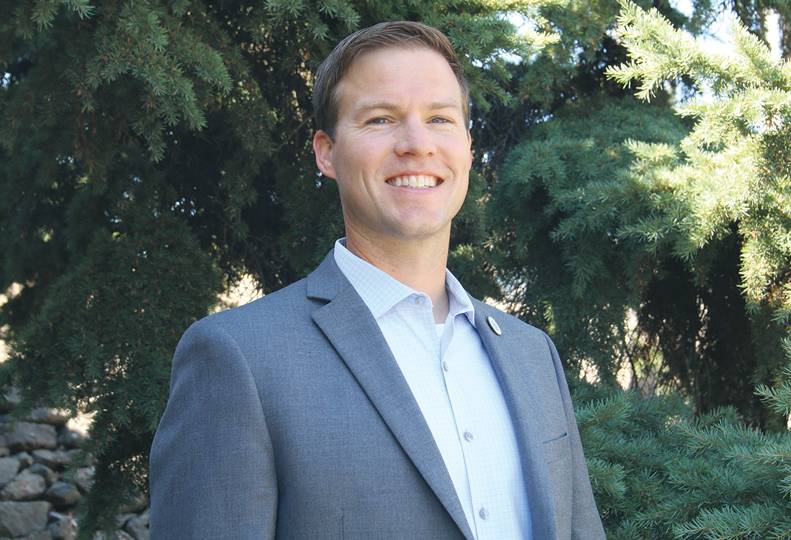 “You always want to have that leader that you rally to in the center of a whirlwind,” says Brian Newberry of 38-year-old Toby Broemmeling, the executive director of the West Plains Chamber of Commerce.

Formerly base commander at Fairchild Air Force Base, Newberry met Broemmeling when the latter was working at a youth ministries organization on base and describes him as a leader with both vision and empathy.

“Whether leading his spiritual group, whether leading the chamber, you always know he’s looking over the hill,” says Newberry, now CEO of the Girl Scouts of Eastern Washington and North Idaho.

Further, he contends, “He understands his West Plains business chamber, so as they’re struggling, as they’re doing well, he can share in their victories and understand their defeat and try to be there to give them a life saver.”

As for seeking the chamber leadership position, which he has held since January 2018, Broemmeling says, “I was looking for something that kept me in the West Plains and where I could serve the community.”

Broemmeling was born and raised in the Washington side of the Lewiston-Clarkston Valley and says it’s that “small town charm” that drew him to Airway Heights and Cheney, where he currently lives with his wife, Marissa, and his two children, Wyatt and Harper.

“It’s more than just everybody knows everybody,” he says. “It’s almost like siblings where we might not always agree internally, we might battle internally, but we’re family and there’s a level of respect and togetherness in that.”

He adds that he thrives on meeting diverse groups of people, and one of the most rewarding parts of his job is working with businesses to find a mutual vision that benefits the businesses and the community as a whole.

“I think you always face adversity and you always face circumstances where maybe there are those out there who can’t see the same vision you do. So, instead of being frustrated by circumstance, take a step back and see the opportunity in it, find the other angle,” he advises.

Newberry says it was Broemmeling’s grace, maturity, and congeniality that led him to nominate Broemmeling as a Rising Star.

He adds, “When you hear Toby speak, you understand why people listen to him. He’s just got a naturally young optimism that people rally to, and you want to hear it, even at 7 a.m.”

After graduating from Whitworth University with degrees in international business, economics, and business management, Broemmeling’s interest in politics and trades drew him to the Spokane Home Builders Association, where he worked until 2012.

Following that, Broemmeling shifted gears and went to work for the Military Community Youth Ministries and Young Life Military on Fairchild Air Force Base and established a program on the base, which he says was one of his best achievements, and also one of his best lessons.

“I don’t think there’s anyone on base that remembers my program,” he says. “So, the term legacy, it’s a different meaning for me. I was really proud of the program and lives that we touched. I’m still connected with them as they’re all over the world. But the program itself is gone.”

Broemmeling is also a licensed pastor with The Heights Church in Airway Heights, and he draws on his faith in his approach to working with businesses during the pandemic.

“I like the nature of Jesus in how we do business, where it’s okay to be generous and it’s okay to care for other people,” he says. “Even though the DNA of a business is to make money, you could still care for people at the same time.”