Garrett: Part of success is helping others grow 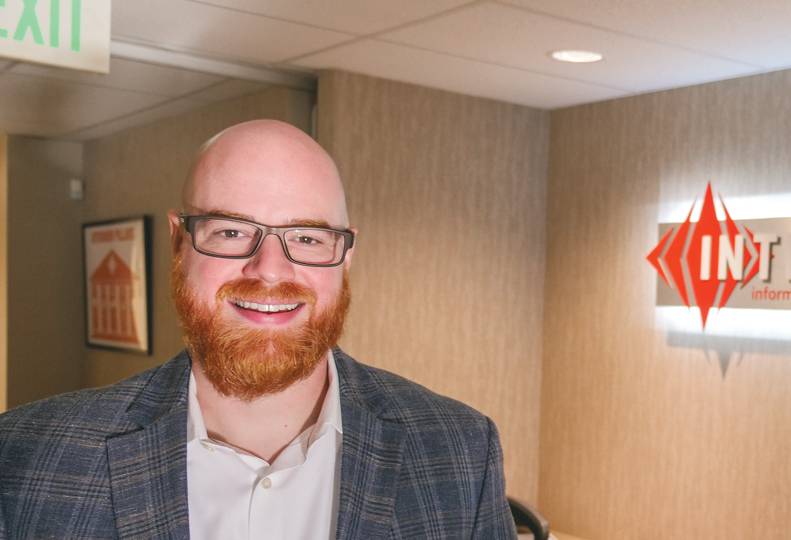 Intrinium Inc. founder and CEO Nolan Garrett says he always wanted to be an entrepreneur.

“From a young age, I loved computers and all facets of technology,” he says. “After a few years, I realized I could control my own schedule and offer better services if I started my own business, which led me to start Intrinium in 2007.”

An information technology and cybersecurity provider, Intrinium offers cyber security and managed IT services to both national and local clients. It employs about 50 full-time employees, with an additional 10 subcontractors.

“After closing our office last year during COVID, we decided, rather than reopen, we'd create a new, larger office,” Garrett says. “The building will have about 13,000 square feet of space, which will include our headquarters as well as some added space for other tenants.”

Garrett says Intrinium has partnered with the Spokane Conservation District on the project, with the goal of reusing materials and reclaiming natural elements of the site during construction.

In addition to building a new headquarters, Garrett says Intrinium is also partnering this year with San Jose, California-based technology conglomerate Cisco Systems Inc. to launch a new platform through which it will deliver cyber security services.

When considering his career, Garrett says a big part of his success has been encouraging others and helping them to grow in skills and experience.

“Whether it's staff or clients, I've found that encouraging them to learn, grow, and become better is key to their success,” he says. “And as they succeed, my success follows behind.”

Garrett says his leadership style is best described as collaborative and empowering.

“Over the last 15 years, I've watched individuals move through the business, and I love to see that level of growth and success,” says Garrett, who is 38 years old. “I enjoy coaching and helping provide people those opportunities.”

Pat Atwal, Intrinium's chief operating officer, says she has worked with Garrett for 3 1/2 years, and while Garrett is her boss, she also considers him a good friend.

“Nolan is extremely intelligent, a life-long learner, enjoys testing himself with new challenges, and operates with a clear compass of core values that guide him,” says Atwal.

Atwal says she nominated Garrett as a Rising Star because she's impressed by his commitment to growing Intrinium, both through his personal investments in the company and keeping its local roots, while also investing in other opportunities locally.

“He provides mentorship to Spokane-area businesses that are trying to find their path and has invested in some of them to help them grow,” she says.

Garrett says starting his own business and being successful has inspired him to guide others to do the same.

“When giving back, usually that's the avenue I choose, helping other startup entrepreneurs get their feet under them and get their businesses rolling,” he says.

In June, Garrett published a book with an R-rated title that tells the story of how he started Intrinium and gives readers tips and tricks for starting their own business.

Garrett says his advice for entrepreneurs is twofold: build your plan, and don't give up.

“Sure, you might get things wrong, but you have to be willing to fail a few times and just not give up,” he says.