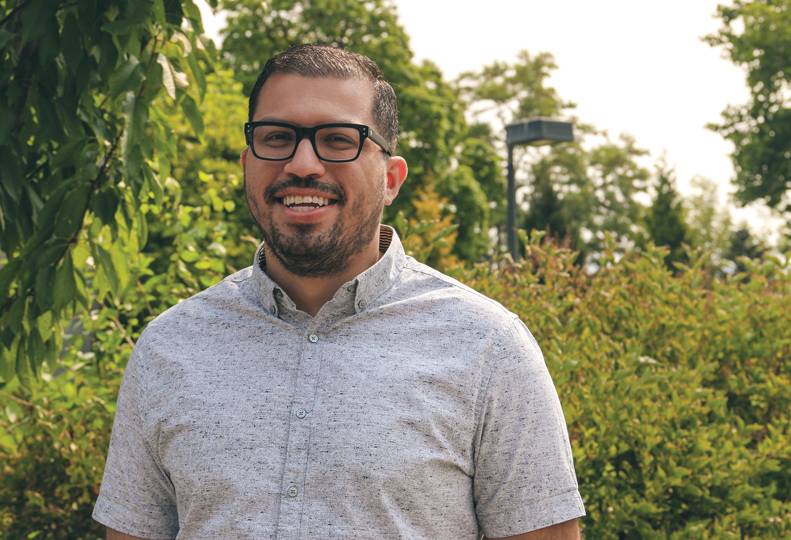 What started as just a job after college has transformed into a personal mission for Guillermo Espinosa to provide students at Spokane Community College a path through their college education and into a career.

Espinosa, 30, who was appointed director of student success, diversity, and equity at the Center for Inclusion and Diversity at SCC in March, has found his calling in education and characterizes himself as a passionate and encouraging advocate.

Espinosa says one of his passions is working with undocumented students to realize their opportunities for an education.

“I think it’s an underserved population and a misunderstood population,” Espinosa says. “We’re setting up barriers for people who, through no fault of their own, are here with no legal documentation but are being very much taken advantage of.”

Born and raised in Leavenworth, Washington, Espinosa describes himself as a first-generation college student with immigrant parents from Mexico who had to learn the language and who worked in labor-intensive jobs.

“The work I do now, they don’t really understand it because they’ve never been exposed to it. ‘Someone cares about diversity? You get paid to do what?’” he says, laughing. “They just tell everyone I’m a counselor.”

Espinosa earned his bachelor’s degree in business administration with a focus on international business in 2013 from Gonzaga University with the intention of selling fruit overseas. “In my mind, I was going to be an international salesperson,” he says.

After graduation, Espinosa was hired as an admissions counselor at Gonzaga. He says he started to realize his passion and talents could be used to help other students move into education as a first step or move through education into a well-paying career.

“A lot of my passions coincide to this role I’m in now, which is helping students build a bridge through generational poverty through education,” Espinosa says. “And helping them find careers that the state wants to employ and then businesses will want to move here.”

Lori Hunt, dean of student success at SCC, says she nominated Espinosa as a Rising Star, “because of his trajectory of where he’s come from and where he’s going.”

Hunt also mentioned that Espinosa’s involvement in the Spokane community left an impression on her. “That’s important to see someone so young take an investment in (Spokane),” Hunt says.

Recently, Espinosa returned to college at Eastern Washington University for a master’s degree in business administration. “I chose to start my MBA to see if there’s a way I can impact (students) not just by the work that I do, but also by the career that I choose,” he says.

As an advocate for inclusion, Espinosa says he plans to bring in a more diverse workforce at the center so students seeking help have plenty of options. He says he’s comfortable having conversations about diversity and affirmative action with both students and colleagues.

Espinosa says job candidates will sometimes only hear how their diverse background will help a company’s diversity numbers rise. He says candidates will be told, “‘We’re hiring you because we want to diversify our workforce.’”

Espinosa’s message to candidates, however, includes value outside of their background. He’ll tell candidates, “We’re hiring you because you’re a great asset to the team, including and not limited to the fact that you’re a diverse applicant.’ I found when I worked in admissions, I would have to have that conversation a lot.”

He also uses his voice to speak up for students in meetings. With pandemic safety measures moving class-
es online, and in the rush to get students ready for online learning, the center required students to complete online forms to check out laptops and wireless hotspots.

Hunt says, “He was quick to make a comment about how we’re asking people with limited technology to sign up online for technology. Does that make sense?”

The Center for Inclusion and Diversity provides career planning, financial aid and registration assistance, counselors to advise students with educational plans, support for veteran students and foster-youth students, and support for students from historically underrepresented backgrounds.

Hunt says, “I’m hoping he’ll stay in education, but he’s almost done with his business degree. I just think he’ll make a lot of impact in future students’ lives, and I’m excited to watch him continue to rise.”