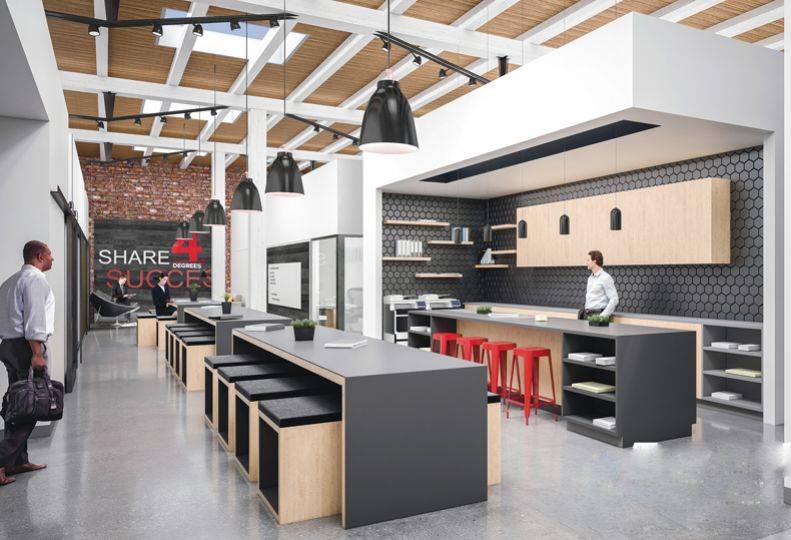 -—HDG Architecture
A $1.4 million remodel is planned at a downtown building that 4 Degrees Real Estate recently bought. T.W. Clark Construction LLC, of Spokane Valley, is the contractor on the project.

The owners of 4 Degrees Real Estate have bought a new building at 915 W. Second in downtown Spokane, which they intend to use as the brokerage’s new offices.

Jordan Tampien, who co-founded 4 Degrees with his brother, Joel, in 2015, says the two purchased the one-story, 15,000-square-foot office building and 45-stall parking lot, as well as a nearby 1,500-square-foot mechanic shop through their company, 2nd Avenue LLC, in July.

“We purchased the site and two buildings from Ultima Properties LLC, for just over $1 million,” he says. “We’ve outgrown our previous spaces, so we’re hoping this site won’t be as easily outgrown.”

4 Degrees currently has offices located at 1826 E Sprague, which houses the company’s management operations, and 1209 W. First, where the company’s brokerage operations are based.

“The idea is to combine both services into one location here,” says Tampien. “We plan to sell our Sprague location and lease our old First Avenue space.”

Spokane Valley-based T.W. Clark Construction LLC is the contractor for the project, which was designed by HDG Architecture, of Spokane.

“The plan is to build out about 35 office spaces, an indoor courtyard area, a golf simulator and game area, as well as a training area for our brokers,” he says. “We expect everything to be wrapped up and ready for us to move in by the end of January.”

The nearby mechanic shop will be converted into an on-site employee gym.

“Currently we have 28 employees and 41 agents,” he says. “This space will be an excellent new work environment for them, but also an entertainment space for clients that’s large enough to host special events.”

Tampien says the move also gives the company an opportunity to help shape an underdeveloped part of downtown.

“A lot of these sites have been overlooked for quite a while, so it’s really exciting for us to have this opportunity to help transform this area into something new,” he says.