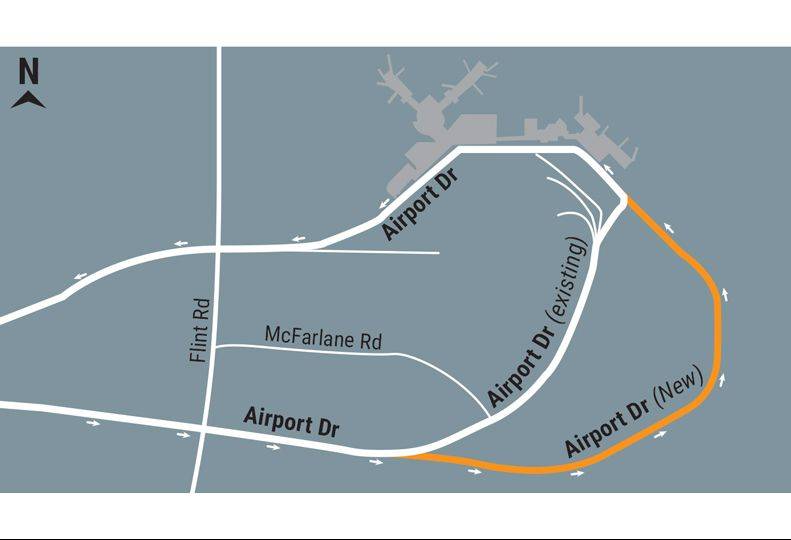 Construction crews recently started work on a new road project at Spokane International Airport that is designed to improve incoming traffic to the airport’s terminal complex.

The Airport Drive inbound realignment project will be funded through a $4.6 million airport improvement grant from the Federal Aviation Administration, says Todd Woodard, director of marketing and public affairs for the project.

The project involves extending West Airport Drive by 3,000 feet—a little more than a half-mile—to the southwest to deliver vehicle traffic to the terminal complex in a more direct manner.

“The new roadway will provide more efficient access to the terminal curbside and separate traffic into our parking lots at earlier decision points that will eliminate congestion as well as awkward roadway geometry near the C terminal,” airport CEO Larry Krauter says in a written statement.

Meridian, Idaho-based T-O Engineers Inc. and the Spokane office of CBRE|Heery Inc. are serving as the project’s construction managers. Halme Construction Inc., of Airway Heights, is the contractor on the project.

The section of West Airport Road that leads to the terminal will be removed once construction of the new road is finished, and the land between it and the new road will provide additional space for development in the terminal area, Krauter says.

The federal Airport Improvement Program is funded from a 7.5% ticket fee collected on each airline ticket nationwide and disbursed by the FAA through grants using a formula based on each airport’s passenger boardings, Woodard says.

Grants to small-hub airports like Spokane International Airport typically cover 90% of a project’s eligible costs, with the airport funding the remaining 10%. However, due to federal Coronavirus Aid, Relief, and Economic Security Act legislation, all of the realignment project’s cost will be covered, saving the airport roughly $460,000, Woodard says.

The project is scheduled to be competed in spring 2021, he says.