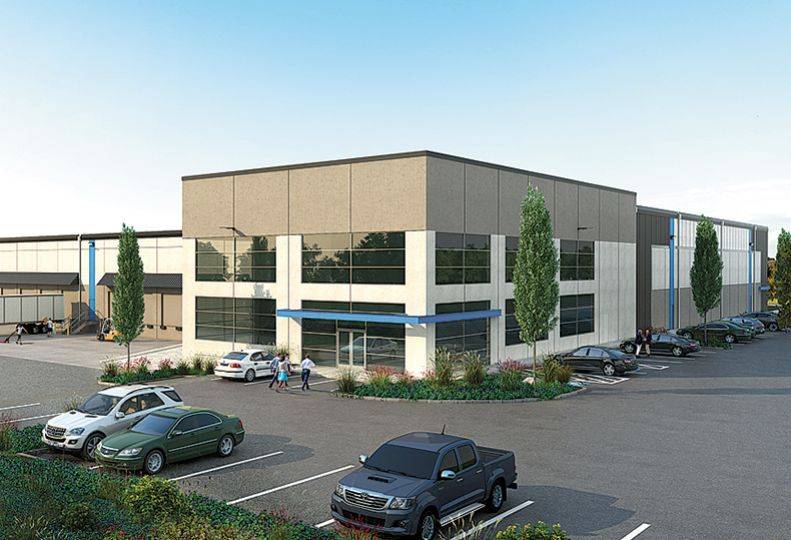 -—Nelson Worldwide LLC
The West Plains Logistics complex is slated to be built on just under 28 acres of land about two miles southwest of Spokane International Airport.

Three industrial warehouse buildings will be under construction this summer at a new development called West Plains Logistics, at 9813 W. Hallett Road, in west Spokane.

Building class is used to describe the quality of properties, including the general condition, location, and amenities.

Darren Slackman, managing broker at Spokane-based commercial real estate company NAI Black, says the envisioned warehouses will be ideal for many companies because of its proximity to Interstate 90 and Spokane International Airport.

“We’re targeting logistics and distribution companies, and they’ll be suitable for manufacturing too,” he says.

West Plains Logistics will be built speculatively with warehouse space as small as 50,000 square feet.

Donnie Belk, senior development manager at the Seattle office of Panattoni, says in an emailed statement that the estimated $46 million cost is for site acquisition and construction of the warehouse shells.

The warehouses will be built with concrete tilt-up construction, and the property will have onsite trailer parking.

Belk says the project will help ease a shortage of Class A industrial space in the Spokane region.

“Spokane is a pressure-release valve for industrial users who are being squeezed for space in Seattle and Portland, in addition to users who need to serve all of Eastern Washington, northern Idaho, western Montana, and Canada,” Belk says. “Spokane is an ideal hub for logistics, light industrial, and manufacturing space in the Pacific Northwest.”

Slackman says the warehouses will be available both for sale and for lease.

He says he expects Spokane County will approve a commercial grading permit this summer. The first building is expected to be available in October 2023, followed by a second one that’s to be completed that November and the final one the next month.

“We’ve seen a lot of these kinds of developments in the last few years with Playfair being really successful. The Spokane Industrial Park also has added some new logistics-type buildings and is building a third one on Barker Road,” Slackman says. “Our vacancy in Spokane is still really low in industrial square footage, and we really don’t have enough big box buildings like this.”

•Bath Fitter Inland Northwest has purchased a multitenant building at 5221 E. Third, in Spokane Valley, where the bathroom remodeler has moved from a smaller location at 13504 E. Sprague, says Kali Capps, inside sales analyst.

Capps says the company’s staff size and annual revenue has tripled in the last five years and had outgrown its former building. The company currently has 25 employees.

Bath Fitter Inland Northwest will occupy 8,500 square feet of space in one suite in the building and is seeking tenants to lease a 4,600-square-foot-space on the other side of the building, she says.