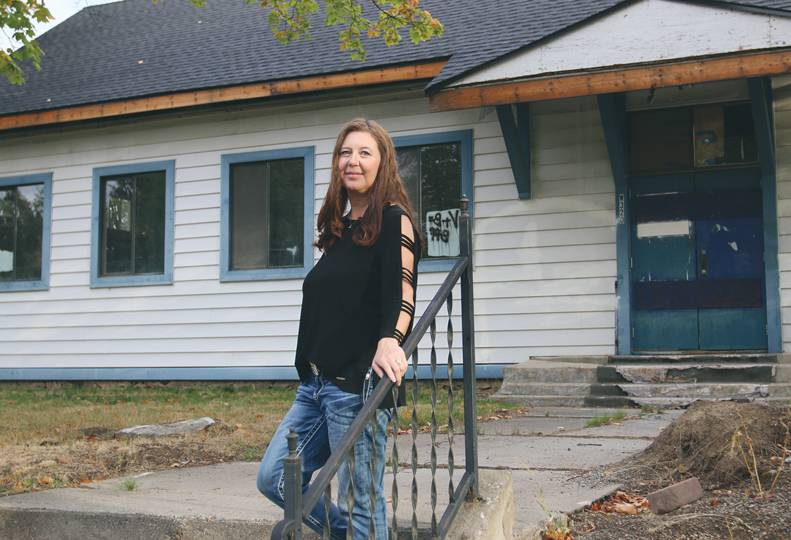 -Erica Bullock
509 Design founder Wendy Nolan stands outside the old Madison Elementary building, in north Spokane. Nolan plans to move the business there from its space in the Steam Plant Square.

The new space is located at 320 W. Dalke, one block south of Francis Avenue and a few blocks west of Division Street. The building is about 2,400 square feet, Nolan says.

The business bought the building in April 2020 for $147,500. Nolan says inspections have been completed and permits for a change of use are in process with the city of Spokane.

Plans for the remodel include new floors, updated windows, and fresh paint for the entire building.

Nolan also plans to add a furniture showroom and retail space on one side of the old school building and have the design studio on the other side.

“After everything is complete, the renovation costs will be at least $150,000,” she says.

Madison Elementary was originally named Byrne’s Addition School, after Dr. Patrick S. Bryne, a mayor of Spokane. The name was changed along with three other Spokane schools in 1915. The building was constructed in 1910, as a one-classroom frame building for approximately $2,750, according to a centennial report by Spokane Public Schools. Two separate one-room additions were added in 1911 and 1914.

509 Design has six employees in addition to Nolan working in 160 square feet of office space in the Steam Plant Square complex, at 159 S. Lincoln.

“We have two designers, a librarian who helps us with admin stuff, and we have three people on the construction crew,” Nolan says.

The new location is needed because 509 Design has outgrown the Steam Plant space, she says, adding, “I’m amazed we can fit the staff we do in the small footprint.”

509 Design currently is working with 17 clients.

“We have been fortunate to not have to put people on a waitlist, but the general contracting division is definitely booked well into the next year,” Nolan explains.

Nolan’s husband and business partner, Alan Nolan, has been running the general contracting division of the design company since 2017, after he retired from the military.

509 Design is the designer and general contractor for its own office remodel. Wendy Nolan says the company will hire subcontractors for the electrical and the plumbing upgrades at the new location.

“We reserve the general contracting division for our clients,” Nolan says. “If they don’t already have a builder of their own, then they are welcome to use ours.”

Nolan says she’d like the renovations to the new location be completed as soon as possible.

“But we’re not even close,” she adds. “We do have furniture coming, so we do have a deadline.”

Nolan says she’s expecting the furniture for the retail space and showroom to arrive this month.

“As general contractors, we are always last on the list. Our clients receive priority, so it has definitely been a slow process,” she says.

“I met and married a military man, and we travelled the world for 22 years. Then he retired and we came back into the area,” Nolan says. “We opened this business back up in 2015.”

Nolan says she loves working on traditional-style designs. “But it seems like whatever project I’m working on right then is the style I love too,” she says. “I’m not fond of the reintegration of all these ’70s items. I think a little bit in moderation is great, but I don’t want to see a ’70s room again.”

Nolan says local demand for commercial interior design services is starting to pick up again after having been stagnant at the onset of the pandemic.

She says established businesses now are calling for office refreshes.

“People want to invest in their businesses, and they’re doing well now, and they want that to reflect in their current aesthetic,” Nolan explains.

Most of the work the company performs has pivoted to residential projects, however, 509 Design also offers commercial interior design, tenant improvements, consultations, kitchen and bath remodels, and furnishings.

Nolan says, “We’re doing a lot of light commercial, peppered in with all of the residential projects.”

Revenue for the design company dipped slightly right after the COVID-related shutdowns began, she says.

"But then, once people were spending a lot of time in their homes, we got a lot of residential inquiries of people wanting to fix their spaces because they were tired of looking at their homes,” she says.

“Even with two months of slowdown due to COVID lockdowns, our overall revenue is up for the year,” Nolan says.