509 Fabrication: Fired up about energy efficiency 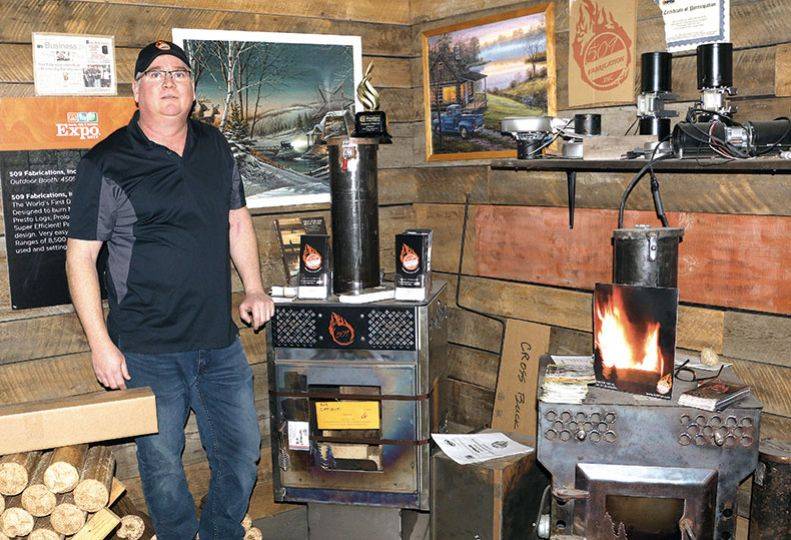 -—Virginia Thomas
Dusty Henderson, owner of 509 Fabrication Inc., says the company has sold 67 of its proprietary stoves this year.

Dusty Henderson had no experience in bringing an innovative product to market, but when he saw a chance to do so, he took it.

After running through rounds of testing and receiving a patent, the 509-1 Optimum vertical-burning stove became available to consumers in January of this year.

The stoves are assembled and hand-welded at the 509 Fabrication facility at 6512 W. Seltice Way, in Post Falls, where Henderson oversees four employees. The name of the company, he says, is a reference to the 509 area code for Eastern Washington and is meant to signify that the company is an Inland Northwest business.

He says the facility currently turns out about two of the compressed-log burning stoves a day, but it has the capacity to manufacture 12 stoves daily. Henderson says he hopes to grow a network of dealers for the stove, at which point he envisions adding about eight more employees.

“We hope to grow and put more people to work,” he says. “Another reason I wanted to do this is to have a product that was made in the U.S.A., made by people who live around here, and be able to give them a wage that will support their families.”

Henderson says he expects 509 Fabrication to be profitable within the next three to five years.

The stove currently is sold direct to consumers and through 23 regional dealers, Henderson says.

Part of what makes the stove more environmentally friendly than others, Henderson asserts, is that the stove burns compressed logs more completely, meaning more heat and less smoke and ash emanates from the stove. Henderson says that the stove is so efficient that if it’s constantly burning, the primary ash collector needs to be cleaned out every 10 to 14 days and the secondary collector only once a month. He says other stoves need to be cleared of ashes as often as every day.

Henderson says most buyers plan to use it in a workshop or “shouse,” a combined shop and house.

The stove was invented by Frank Reed, of Hayden, Idaho, nine winters ago, Henderson says.

“I think Frank built the stove on a dare,” he says. “Somebody told him that it was impossible to burn one piece of wood at a time.”

Reed built an energy-efficient stove that burns pressed logs vertically; as one log burns, the next logs above it in the feeder tube push it down so that “it kind of burns like a cigar backwards,” Henderson says. The result, he claims, is an evenly-burning stove that can heat a space of up to about 2,500 square feet. He says the stove has a burn time of up to 14 hours with a full load of 3 1/2 pressed logs, and a heat range of 12,000 to 42,500 British thermal units.

A Btu is the amount of heat required to raise the temperature of a pint of water by 1 degree.

Henderson, recognizing that Reed had invented a potentially viable new product, bought the idea from Reed in spring 2015.

“I had always wanted to know what it’s like to get an actual product … to market in the United States, what hoops you have to jump through, see why people quit,” Henderson says. “Pressed logs have been around since the 1920s, but no one has ever built a stove specifically to burn them cleanly and efficiently.”

Pressed logs are created by compressing sawdust from sawmills and other wood manufacturers into a log shape.

Henderson, whose background is in construction, sold an Oxi Fresh Carpet Cleaning franchise he owned here and another business in Alaska, then took on the full-time task of getting the stove to market. The process included refining the design, pitching the idea for a patent, getting the stove approved by safety and environmental health organizations Underwriter Laboratories Inc. and the U.S. Environmental Protection Agency, and starting a manufacturing facility.

Henderson says that when he met with intellectual property attorneys at Spokane-based Lee & Hayes PLLC, he spent more than two hours discussing the stove.

“Normally, that’s a 15- or 20-minute meeting,” he says. “They were intrigued, so we knew that we had something good.”

The entire process of getting the stove to market took about three years.

“We missed last year,” Henderson says. “We thought we would be building in July and then the EPA said ‘we want to test that stove again.’ Because it’s the first of its kind, there’s no protocol in how to test the stove.”

The 509-1 Optimum first began garnering attention from the stove industry in March 2017, Henderson says, when he entered the stove into the new products pavilion at the Hearth, Patio, and Barbecue Association Expo in Atlanta. The stove won best new marketable product of the year.

Earlier this year, Henderson was contacted by the Maryland-based nonprofit Alliance for Green Heat. The organization had learned of the stove and urged Henderson to enter into the organization’s stove design competition, held last month in Washington, D.C. There, the 509-1 Optimum received the People’s Choice Award.

Henderson says he hopes to expand the company’s product line in the next few years. He’s particularly interested in manufacturing a stove that uses a thermoelectric generator, or TEG unit, to produce electricity and heat water using energy from the burning pressed logs.

Henderson says he has a TEG unit and will soon begin experimenting with using it on a 509-1 Optimum prototype. While he saw some stoves with TEG units at the Alliance for Green Heat’s competition in November, he says he saw room for improvement in their designs. He hopes to have his own TEG stove ready to sell by fall 2021.