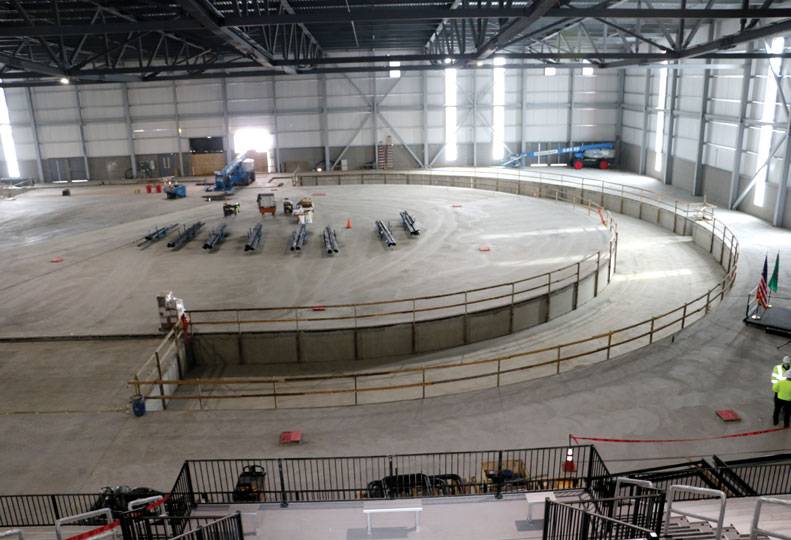 -Kevin Blocker
The interior of the Podium takes shape. Lydig Construction Inc. and Integrus Architecture are collaborating on the project.

Editor’s Note: To read all Building The Inland Northwest stories, please click the BINW2021 tag at the bottom of this article.

Stacked atop a basalt outcropping in the North Bank area overlooking downtown Spokane, The Podium was built on ground that had to be blasted away to ensure solid footing.

But putting together the funding often felt much more unstable than any ground beneath Spokane’s new $53-million sports facility, says Stephanie Curran, CEO of the Spokane Public Facilities District, which will oversee its operations.

“It was like being in a game of Jenga,” Curran says. “If one thing didn’t work, the whole thing was going to fall apart.”

It required collaboration between the city, the Spokane Park Board, the PFD and the Spokane Sports Commission to complete the 135,000-square-foot, state-of-the art facility at 511 W. Dean, just east of Spokane Veterans Memorial Arena, she says.

“When you’re getting that many governmental agencies together, everything has to work out perfectly,” Curran says.

Most construction occurred during 2020 in the midst of the COVID-19 pandemic. The design-build team of Lydig Construction Inc. and Integrus Architecture PS, both of Spokane, is collaborating on the project.

The fact it was a public project kept work going, when some private projects were temporarily halted due to state restrictions, Curran says.

“Had construction shut down that would have obviously increased the cost immensely, and we scrapped together the $53 million that we did,” she says. “We probably would’ve had to cut a lot of things out of the building and made it less than we wanted it to be.”

Set for completion in fall 2021, The Podium will get its first big test when it serves as host for the national championships for USA Track & Field in February 2022. Athletes here will be competing for a position to represent Team USATF at the world championships in Belgrade, Serbia, the following month.

The Podium will boast a 200-meter, six-lane indoor track that can be banked with hydraulics to help runners optimize times in outside lanes.

The hydraulic system is designed to help runners approach the performance they can achieve on outdoor tracks, which are 400-meters with eight lanes. Athletes historically have tended to post faster times running outdoors.

There are only a handful of banked tracks, and The Podium will be the only one in the western U.S., claims Eric Sawyer, CEO and president of the Spokane Sports Commission.

“There’s a huge economic impact associated with hosting USA Track & Field Indoor Championships, but that’s just really only the beginning,” Sawyer says. “This facility can be converted to a whole array of sports, whether it’s wrestling, volleyball, basketball, martial arts sports, cheerleading ... you name it.”