A bad year for good sleep 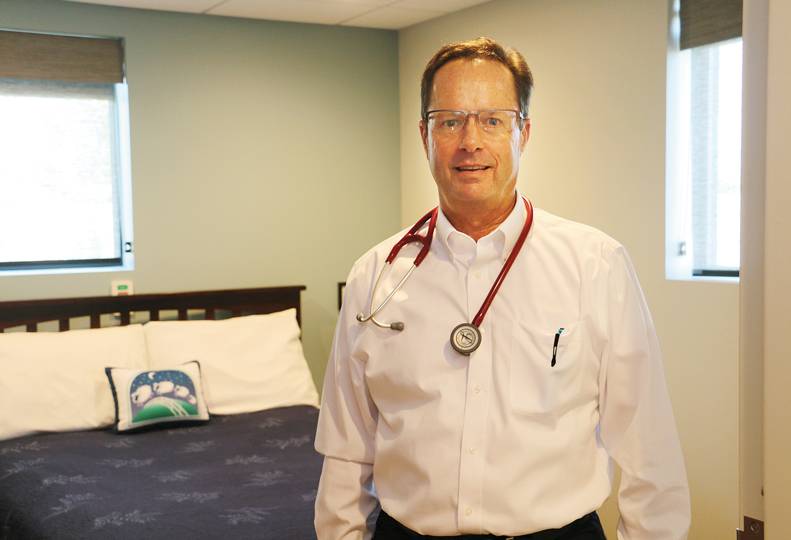 -VIRGINIA THOMAS
Dr. Don Howard, co-owner of Sleep Institute of Spokane LLC, says sleep should be regimented more than anything else.

Dr. Don Howard says many people are struggling with sleep issues related to being at home a great deal due to the COVID-19 pandemic, as well as the stresses resulting from the pandemic’s ripple effects.

Howard is a sleep medicine and pulmonary critical care specialist who co-owns Sleep Institute of Spokane LLC, at 324 S. Sherman. He says the events of 2020 have provided major disruptions to the lives of his patients, and those disruptions have affected their sleep.

It’s a common story in bedrooms throughout the U.S. According to a July survey of 2,000 American adults commissioned by the American Academy of Sleep Medicine, 22% of respondents say their sleep quality is worse than before the pandemic.

Howard says much of human sleep cycles depend on one’s circadian rhythm, the so-called internal clock that’s guided by cues such as light exposure, exercise, and hunger.

Howard says people who are working from home or who are unemployed are at a much higher risk for developing sleep issues due to a variable sleep schedule.

“All the people who are still working and going to work seem to be doing a lot better than people staying home,” Howard says.

When he hears talk of working from home becoming a more permanent fixture of the employment landscape, he worries for the health of those employees.

“Based on what I’m seeing in clinic, that’s just not a good idea,” Howard says. “Some people are working in their bedroom where they sleep, and then the mind starts to associate the bedroom with work and not with sleep, so that makes it more difficult to fall asleep at night.”

People who are home all day, working or not, are also more likely to disrupt their sleep patterns with naps, Howard says.

“If your (work-from-home) job allows you to start when you want and quit when you want, I would avoid that,” he says. “Stay on the same schedule that you’re on at work.”

Howard says patients who were already struggling with sleep disorders prior to the pandemic have been finding it harder to maintain good sleep patterns.

“Every sleep disorder you can think of is affected by this pandemic,” Howard says. “We have a lot of patients who have depression and anxiety, because that’s the No. 1 cause of insomnia. Anxiety levels are up, depression levels are up, time spent in the house is up.”

Howard says that he’s seen insomnia patients who are extremely anxious about contracting COVID-19, even if their risk is low.

“If it’s possible, for some of these patients who have really high stress levels, it would not be inappropriate to get counseling, even if it’s through Zoom, to help deal with some of the stressors,” he says.

High stress levels and poor sleep can lead to professional problems, Howard says. Lack of sleep can affect concentration, energy levels, and mood, among other things.

“If it’s affecting your sleep, then it’s going to affect your performance at work,” he says. “I’ve noticed it here in our office, too. We’ve had more people call in, more missed days.”

For insomniacs who find themselves endlessly anxious, Howard recommends setting aside “worry time” each day.

“You write down all the things that are worrying you, and you quit thinking about them,” Howard says. “It’s on a piece of paper, you can deal with it tomorrow, but right now you’re going to sleep.”

“You could get your news in 30 minutes. You probably don’t need to watch five hours of news,” he says. “Too much information about bad things that really can’t be fixed by anything you’re able to do is probably not helping your sleep. During this whole pandemic thing, get your information to some degree, but you’re going to need to do things to decrease your stress.”

Howard says getting enough exercise can help cope with stress. He also recommends using meditation and stress-management apps such as Calm. Whatever stress-relief methods people choose, it’s a good idea to take time to plan how and when to use them.

Enduring the stress of a pandemic is like running a marathon, not a sprint, he adds.

“It’s about sitting down and coming up with a plan for yourself about how you’re going to handle this,” Howard says. “How you handle it is going to affect your sleep. Avoid too much of anything that’s negative that’s going to make things worse for you.”

Howard says it can be difficult for people who haven’t experienced sleep problems in the past to know when to reach out for help. Loud snoring, he says, is always cause for concern — people who snore loudly at night should get an evaluation from their primary physician or a sleep medicine physician. Excessive sleepiness during the day is also concerning and should be discussed with a physician, as it could be a symptom of a sleep disorder such as narcolepsy.

Howard says it’s likely that more people are experiencing insomnia this year. However, not everyone who has trouble sleeping at night should make an immediate appointment with a sleep specialist.

“If you’re having insomnia — you have trouble falling asleep, staying asleep, or waking up early and can’t go back to sleep — and it just started, wait a little while, because it could just be a transient insomnia,” Howard says. “If you’ve been having it for a couple of weeks and it’s pretty bad, you should bring that up. You still may only have a transient insomnia, which means short-lived, but you might need some help during that period of time.”