A dynamic approach to fitness 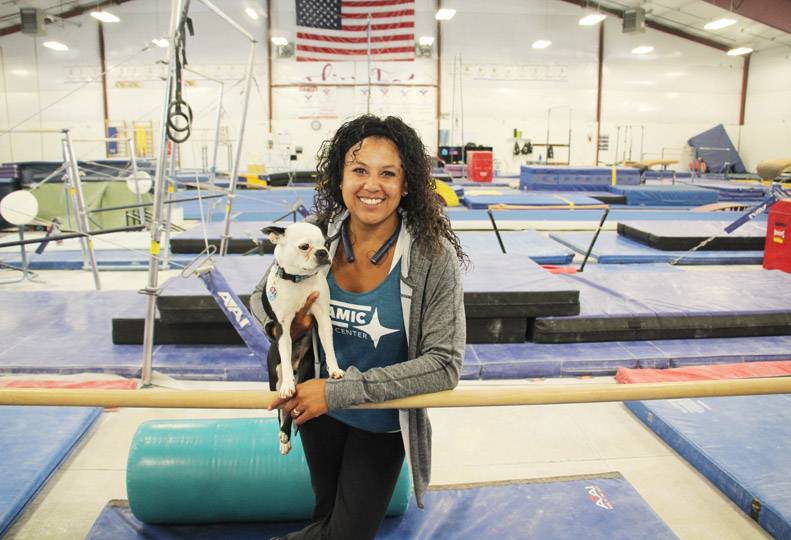 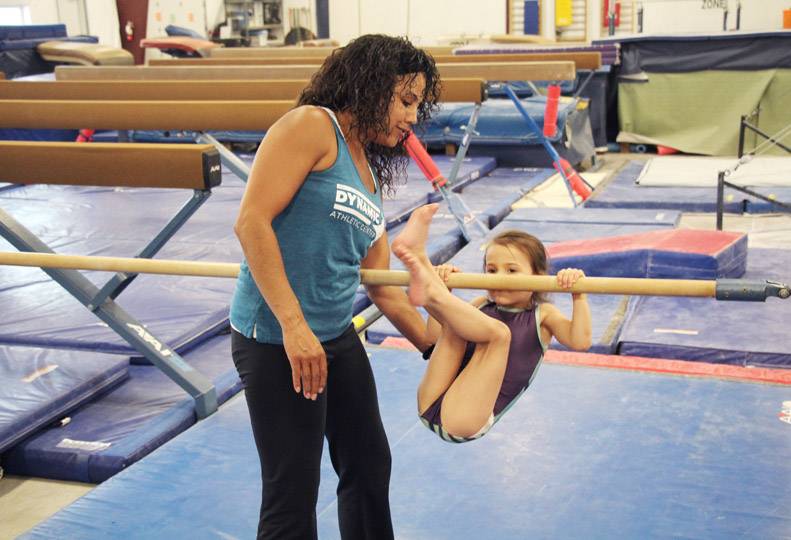 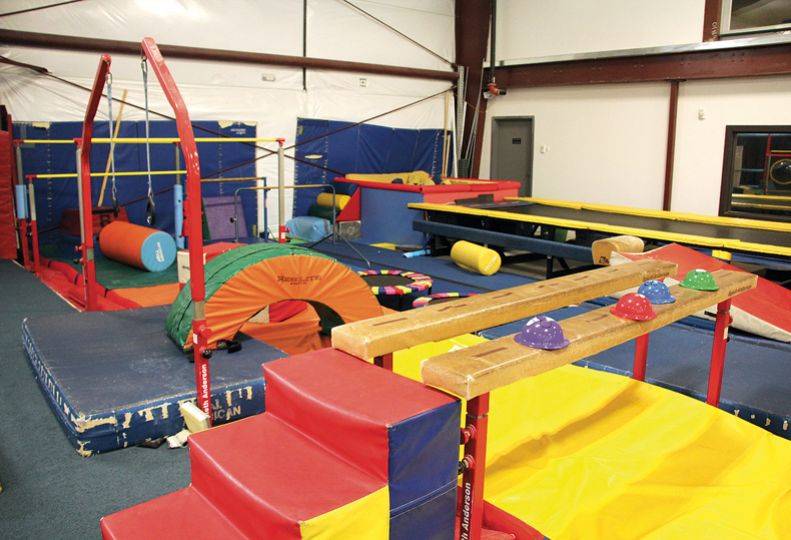 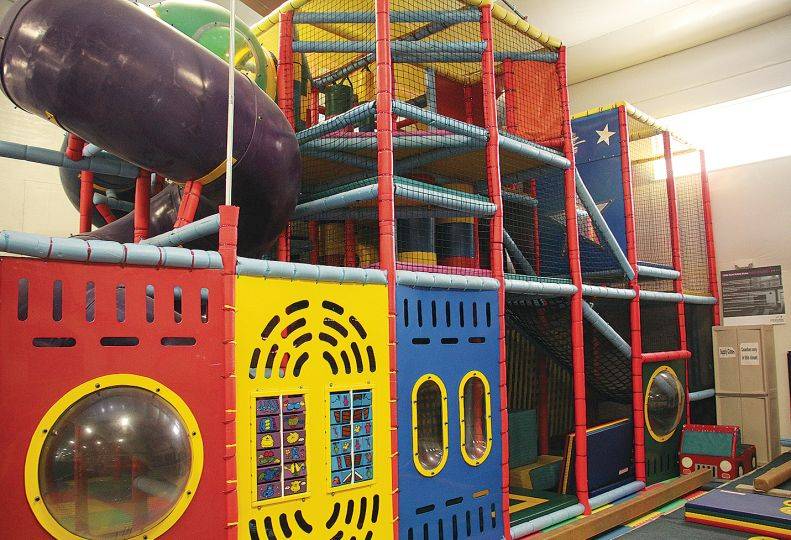 A long line of parents, siblings, and friends of aspiring young gymnasts waited outside the Dynamic Athletic Center in mid-May to enter the facility and watch a season-ending gymnastics show featuring more than 800 young people of all ages.

The crowd, the bustle of activity in and around the center, and the sheer size of the three-year-old, 31,000-square-foot venue seemed almost out of place in the mostly light-industrial area in Hillyard where the facility is located.

It’s all part of the long-range plan, though, of veteran competitive gymnast and gymnastics coach Adana Harris, who co-owns the center with her husband, Dylan, through Spokane-based Harris Athletics Corp.

“I’ve always had a plan. I love planning stuff, and I love seeing it come to life,” the admittedly hyperactive Harris says. As for the growing number of students Dynamic Athletic Center is attracting, she says, “I love developing success.”

Gymnastics isn’t a “location-based” business, she says, and her decision to develop the center in the Hillyard area, at 5512 N. Havana, bordered on the east by undeveloped land, enabled her to make it large enough to accommodate future growth.

That was an important consideration, she says, given that the business for years had to turn away students at its previous location at 7410 N. Division, due to a lack of space to accommodate all who wanted to take classes there.

Dynamic Athletic Center offers gymnastics, cheer, dance, fitness, and “active life learning” preschool classes, activities, and facilities for participants ranging in age from 16 months to 18 years old. Its offerings include both recreational and competitive programs, the latter structured for young people looking to compete at local, regional, and national events. It employs 27 people, five of them full time, and more than a half dozen of its former students now work there as coaches.

At the North Division location, in a converted space where the North Division Cinemas formerly operated, Dynamic Athletic Center was working with about 500 kids who collectively were taking about 800 spots in classes per week, Harris says. In its new, much larger quarters, it now is working with about 900 kids who are taking about 1,500 spots in classes, she says, adding that she’d like to see participation in classes grow to around 2,400.

Its basic tuition rates are $70 a month for one class a week, $130 a month for two weekly classes, $180 a month for three classes a week, and $225 for four classes a week. For people interested in using the facility strictly for fitness, it has a workout room, charges $20 a month for unlimited use of the fitness equipment there, and doesn’t require signing a contract. The center has its own athletic-apparel retail area, selling items such as leotards and dance outfits, that Harris would like to expand, including online.

Of the building’s 31,000 square feet of floor space, though, by far the largest portion—about 22,000 square feet—is devoted to a gymnastics arena. It’s a high-ceiling open space filled with all types of gymnastics training equipment, such as balance beams, uneven bars, parallel bars, vault platforms, and large padded mats for performing floor exercises. For the younger set, the space even includes a staff-supervised kids’ fitness playground.

Harris’ office is located on a mezzanine level of the building, where rows of bleachers also are set up that enable spectators to watch floor activities and performances. A kitchen-concessions area, preschool area, and the fitness room also are located on that level.

The athletic center’s busiest schedule coincides with the academic school year—its fall registration period kicked off on July 23—but Harris says she also is focused on building up more summer offerings to bring in more center users during its typically slowest months.

Harris’ family moved to Post Falls from the Midwest when she was 4 years old. Her mother, who originally was from there, placed her in dance and gymnastics a year or two later, initially at Lake City Gymnastics in Coeur d’Alene, as a way to channel her abundant energy, she says.

The family moved to Spokane when Harris was in the seventh grade, and she further developed her gymnastics skills at—and competed through—Northwest Gymnastics Academy, owned by Mike and Nancy Armstrong, in Spokane Valley. Over a number of years, she says, she won recognition at events held throughout the region, including garnering 1984 All-Around State Champion honors in Washington, she says.

She was a member of the Lewis & Clark High School gymnastics team for four years and also participated on the track and drill teams there, and as a cheerleader. She later attended Eastern Washington University, majoring in business management and computer information systems, but left school before earning her degree.

“My whole goal was to own my own business,” she says, adding that she was eager to begin taking more focused steps to achieve that goal.

After years of working as a gymnastics coach and program manager here, she agreed to buy the Dance Emporium, then located at the North Division “Y.”

She took it over in 2003, a year after it had relocated to the former North Division Cinemas space on North Division and changed its name to Dynamic Gymnastics Academy.

Harris had a 10-year lease there, and says, “We were full in about five years. We turned people away for years after that because we just didn’t have room.”

Through Harris Athletics Corp., she and her husband began developing the $1.5 million facility in the Hillyard area in 2014 and the business moved into the structure in the spring of 2015. As part of a plan to expand its offerings in the larger space to into more dance and cheer programs, as well as preschool and general fitness, she and her husband changed the name of the academy to Dynamic Athletic Center.

Asked about the business’ annual revenues, Harris says it’s too early to estimate what they’ll be for this year because it still is absorbing the higher volume of students and larger number of employees at the new location.

But she adds, laughing, “Gymnastics does not make that much money.”

It’s clear, though, that Harris’ business plan is working, in terms of drawing a rising number of aspiring young gymnasts, whether for purely recreational and fitness reasons or to pursue competitive goals.

Spokane has a number of other gymnastics centers, each of which differ quite a bit in their approach and program offerings, she says.

For Dynamic, Harris says, “It’s not about team. It’s not about rec. It’s about the kids themselves,” and helping them to grow and progress.

“Every kid is different. You want to do the best for every kid,” she says. Describing the coach’s role as being almost that of a second parent, due to the amount of time coaches often spend with their students, she adds, “You’re helping them grow as human beings.”

Looking into the future, she says her goal for Dynamic Athletic Center is simple: “I’d love to be the place to go if you want to be the best.”