A foothold on the sock market 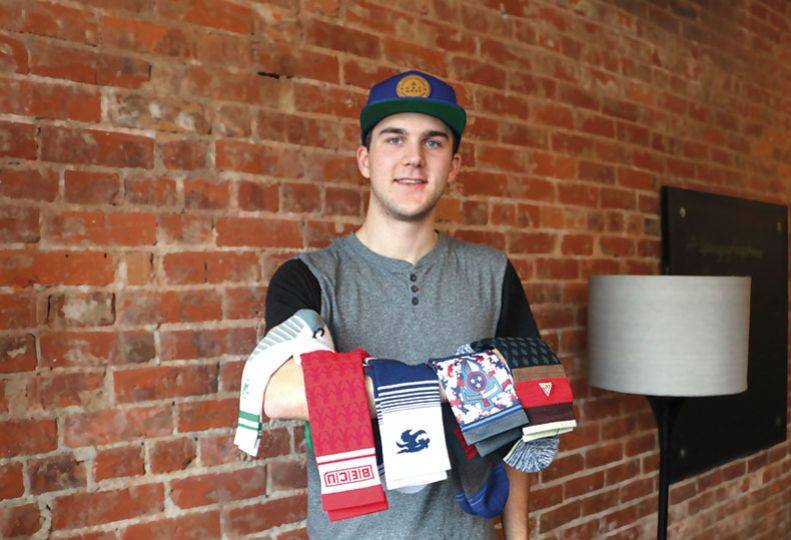 “It was the worst smell ever,” he recalls, laughing.

Five years later, Peterson and Stensland, both 23 years old, are co-owners of Select Threads LLC, an online sock customization business based here. They no longer work with used (smelly) socks, instead manufacturing and sublimating their own brand of socks through a facility in the Philippines.

Peterson says they discovered the idea for Select Threads in a marketing class they took at Mt. Spokane High School.

“One day we were sitting in class and we came across this other company that was creating custom socks and doing exactly what we ended up doing,” he says. “There were a few other companies doing a similar thing, and we figured out we could also do it without any crazy startup expenses.”

After a few months of using friends’ used socks, the pair switched to accepting only new socks their friends had bought, then eventually to buying their own socks on which to create designs.

Peterson and Stensland soon found a market beyond their friends.

“As we were creating these custom individual socks, we found that there’s a lot of teams ordering custom socks to match their jerseys,” Peterson says.

As they looked at similar companies, Peterson says he and Stensland realized that the process of ordering custom socks online was often complicated, requiring several steps and sometimes requiring some knowledge of logo design.

“To customize a sock, for any company, you had to go online, email (the company), send them the logo, send them your team colors, and then they’ll come back with a mock-up,” Peterson says. “We wanted to change that.

While Select Threads can still do mockups on request, customers can take advantage of the company’s online process to upload their logos, change their colors, use the customization tool, and place their orders.

Peterson and Stensland originally named their business Ok Sock, but changed the name as part of their rebranding this year.

“One thing that we’ve kept coming across is a lot of our customers, we’d show them our socks and literally the first reaction would be, ‘Just okay? They’re just okay?’”

The name also limited the company to socks, Peterson says.

“It’s really catchy and easy to remember, but then we also couldn’t expand into other products,” he says.

Peterson and Stensland began searching for an available website name that fit their company, and eventually landed on Select Threads.

While Peterson and Stensland originally printed designs onto Nike Elite socks, they’ve since switched to their own brand of socks, which they say saves money for customers.

After they began using their own brand of socks, Peterson and Stensland found that while knit socks sold well, they could create more complex designs and provide individually customized socks with a part sublimation printing process on polyester socks.

“This is a process that allows for one-offs,” Peterson says. “With knits, we have to hit minimums of 15 pairs. With these, we can actually do specific numbers. If a team came to us and they had 15 different numbers, we could put 15 different numbers on them, whereas the knit we can’t do that because you have to have 15 of the exact same design. It opens some possibilities for more customization.”

Peterson says he and Stensland quickly discovered that their socks were being used for team fundraisers and found a way to streamline that process through their website.

“A lot of the teams we were working with were using the socks as fundraisers to raise money for their programs,” Peterson says. “They’d give the team their 15 pairs or whatever, and then they’d use the other 150 pairs of socks that they’d purchased to raise money by selling them. We figured, let’s give them the option to sell the socks directly on our site without having to buy any inventory, reducing all risk for them. Now they can come create their sock, they can check out their sock, and then they can submit it to host a fundraiser directly on our side through our crowdfunder.”

Last month, Select Threads hosted a crowdfunded fundraiser for Spokane-based nonprofit Teen & Kid Closet, which provides clothes to kids in need. In lieu of money, the fundraiser provided 62 pairs of socks to the nonprofit, Peterson says. He and Stensland hope to become more involved with fundraising for nonprofits, he says.

“What we were mainly selling was the Nike Elites,” Peterson says. “When we cut that off, we sold all of our equipment and everything. We definitely took a hit in sales, just because our whole model changed. We looked at it and knew we were going to take a hit, but the focus is changing so much, and for the longevity of our business, that was the only move we could do.”

Peterson says he and Stensland are the company’s sole employees, though they hope to add a designer, and later a sales and marketing team.

For now, Peterson works gig jobs, such as delivering UberEats orders when he’s not busy with Select Threads. Stensland lives in Portland, where he has a full-time job in addition to Select Threads.

“He’s working socks in his nighttime hours. It’s different hours but it works out pretty well,” Peterson says. “We’ve been friends since fourth grade. We get along very well. What needs done gets done and there’s not a lot of arguing and stuff like that. It’s the perfect partnership.”

Peterson says Select Threads has never spent money on advertising, instead using word of mouth and social media to gain customers. However, he says, he and Stensland are looking into advertising on Facebook and other social media platforms.

While most of their orders have come from the East Coast, Peterson says Select Threads needs to establish a solid presence in Spokane.

“Our initial plan right now is to really get in front of the Spokane market and kind of capture that, then slowly move outwards from Washington,” Peterson says. “There’s plenty of potential here in this market, just with athletics and corporations and businesses.”

Peterson, who often works at Startup Spokane, says Select Threads has no plans for establishing a brick and mortar store or an office here. However, the company is looking to expand the apparel it offers.

“Eventually we do want to add other products, but for now we’re just really focusing on the custom socks,” Peterson says. “We want to add ankle socks, mid-ankle socks, and knee socks to our product line … before we go into other products. We already have these as an option if requested, but for the most part we just promote our crew style socks, as they are the most ordered.”