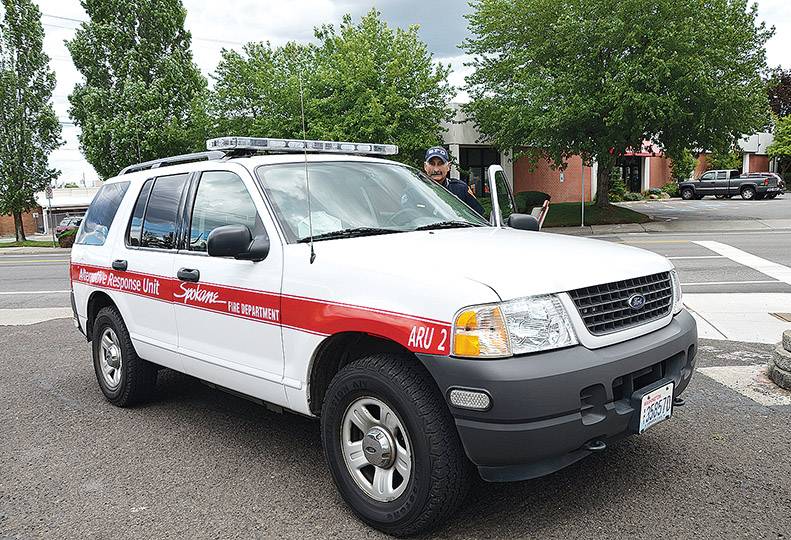 -—Judith Spitzer
Fire Department paramedic Mark Tellez stands beside one of three ARUs the department is using to respond to medical cals.

Pain … chest pain, back pain, and abdominal pain as well as nausea, shortness of breath, and vomiting are among the top 10 reasons firefighters are called out by 911 dispatchers to assist people in the city of Spokane, says Brian Schaeffer, assistant fire chief for the Spokane Fire Department. Which prompted this question put to the fire department by an anonymous Spokane resident: “Why does it take four firefighters and a ladder truck to help my neighbor with flu symptoms?”

The answer is, in many cases, it no longer does.

Almost 80 percent of all calls to the Spokane Fire Department are for medical emergencies. Like other cities, Schaeffer says, the fire department here has seen an increased demand for nonlife-threatening medical calls, adding that nonemergency calls were up 13 percent in 2013 compared to 2012, while life-threatening medical calls were up 2 percent during the same time frame.

Over the past six months, a pilot program that dispatches smaller vehicles known as ARUs (alternative response units) has gotten rave reviews from the fire department in three Spokane fire stations, says Schaeffer, and the program has been given the green light by the Spokane City Council to continue for another 18 months. Based on Schaeffer’s positive program evaluation, review of patient incident reports and outcomes, and an overall cost-benefit analysis report made to the city council, the ARUs, which are specially-equipped Ford Explorer SUVs, will continue to be used for specific medical calls until early 2016.

Schaeffer says that through call triage, fire department dispatchers determine quickly through a series of questions whether the situation requires a ladder truck or if the issue can generally be resolved with a one-person ARU. Ladder trucks, which include a minimum of three firefighters, are used when time critical interventions need to be delivered in parallel order, such as heart attacks or rescue calls.

The ARUs enable the fire department to provide better service and free up equipment and personnel for higher-priority calls. The smaller vehicles, staffed by one Emergency Medical Technician or paramedic, are easier to deploy and easy to put back into service, Schaeffer says.

“In life-threatening situations like heart attacks, you would need all those people to triage the situation, one starting an IV, one talking to the person, one calling it in, and all those things need to be done simultaneously and you need more hands,” he says.

“The person in the ARU can get details of the call from dispatch and then talk to the person, ask questions and talk to them all the way to the location if they want, since the SUVs are very quiet compared to a big fire truck with all the apparatus on it,” he says.

In October 2013, the city’s Emergency Management Services Division got permission to develop an ARU program and put units into service at three of the city’s 15 fire stations, at 44 W. Riverside, 1001 E. North Foothills Drive, and at 1515 W. First. The units have been in service Monday through Friday from 8 a.m. to 6 p.m. During the six-month trial period, the ARUs responded to nearly 1,500 nonemergency calls.

Schaeffer says priorities for putting the pilot program into place included getting the right resources delivered to the right call at the right time and improving response times and reliability for critical fire apparatus. Other top priorities included reducing wear and tear on more expensive ladder trucks, and saving money on maintenance and replacement costs for aging fire equipment.

While the ARUs aren’t capable of performing critical fire and Emergency Medical Service interventions, they are proving to be an effective way to improve response and reliability thereby having a profound positive effect on the fire department’s system capabilities, he says.

“The program is freeing up traditional three- and four-person crews in traditional fire apparatus to focus on more critical incidents that, at times, were simultaneously occurring,” says Schaeffer.

Schaeffer says the department is using SUVs it already owns and retrofitting them,  which means there is no additional capital expense to buy the vehicles.  It has also saved money on wear and tear on the smaller vehicles, he says, which is much more financially manageable than maintenance and repair of the ladder trucks. “So far, we’ve used existing equipment,” he says.

Schaeffer says the department will continue to monitor and evaluate the use of the ARUs and make any necessary changes. “Ultimately the city will decide whether to make it a permanent policy. But, so far we can’t see being any more excited about the future of the ARUs,” he says.