$17.5 million facility will have the capacity to host up to 34 additional families 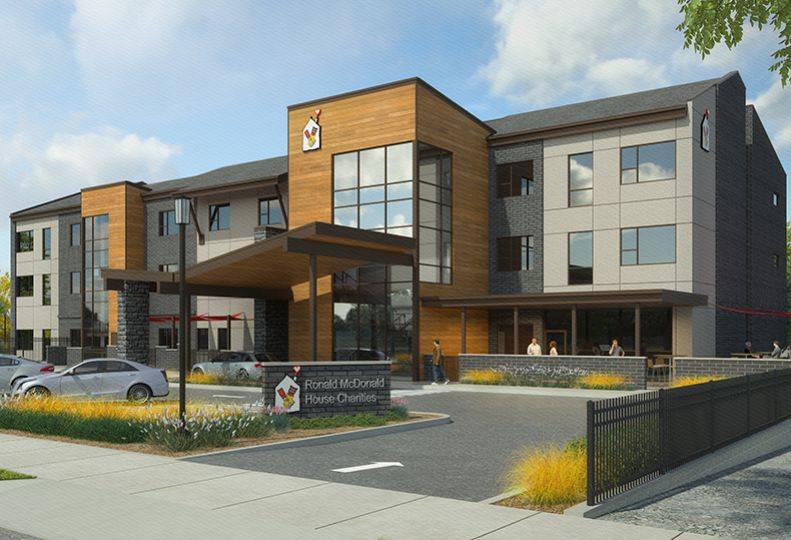 -—Wolfe Architectural Group
The second Ronald McDonald House will be built across Fifth Avenue from the current facility. 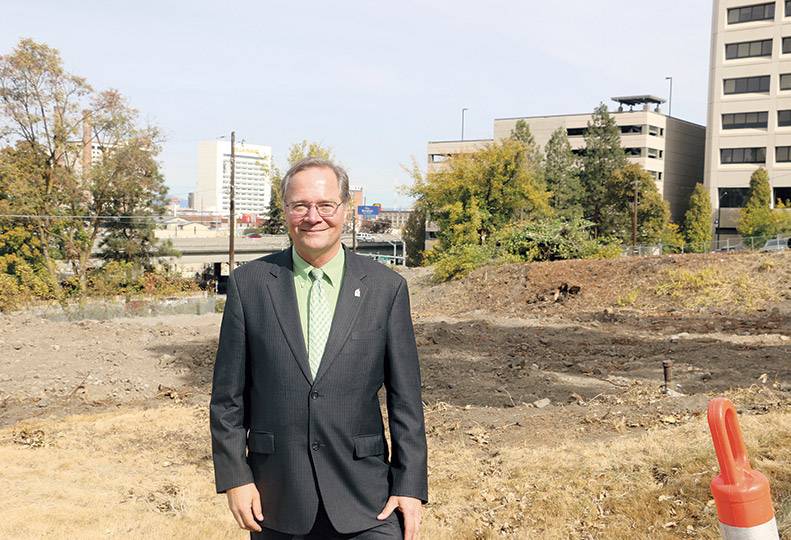 The 35,100-square-foot facility will be constructed at 1028 W. Fifth, directly across Fifth Avenue from Spokane's first Ronald McDonald House, at 1015 W. Fifth.

To finance the new facility, the nonprofit launched its first capital campaign on Tuesday at the groundbreaking ceremony for the facility, says Mike Forness, executive director of Ronald McDonald House Charities of the Inland Northwest. Forness says nearly $7 million of the $17.5 million goal has been raised so far.

A groundbreaking ceremony was held Tuesday, Oct. 9, but earthmoving operations in preparation for construction of the parking garage had already begun, Forness says. Funds raised in a quiet phase of the capital campaign were sufficient to begin construction, and the facility is expected to open Jan. 1, 2020, Forness says.

Bouten Construction Co., of Spokane, is the general contractor on the project, and Wolfe Architectural Group, also of Spokane, designed the facility.

Forness says the nonprofit had been searching for a suitable second location for a decade.

"We've had a waiting list for the last 10 years, and it's grown over the years," Forness says. "We worked with different community partners to identify and evaluate different sites. We were more focused on finding the right option and site than we were building right away."

Forness says the nonprofit considered constructing a new, larger facility on the campus of Providence Sacred Heart Medical Center & Children's Hospital to replace the original Ronald McDonald House, since many families staying at the Ronald McDonald House have children who are receiving care at Providence Sacred Heart Children's Hospital, but timing and finances continually thwarted that idea.

"With that being exhausted over a period of eight-plus years, we decided that we would just create a campus where we're at," Forness says.

The new three-story building will have 34 private family guest rooms and suites above a two-level, 63-stall parking garage. Eight kitchens, three laundry rooms, two exercise rooms, two movie rooms, a teen room, indoor and outdoor play areas, and two patios will be common spaces for families staying in the facility. One of the kitchens will be reserved for groups that visit the facility, such as Boy Scout troops or church groups, Forness says.

"The kitchen is really the heart and soul of a home, so we've put a lot of attention into providing the best kitchen we can in terms of usage and design," Forness says.

A ninth kitchen will be available only to families of pediatric oncology patients whose weakened immune systems could prevent them from safely accessing common spaces, Forness says.

Construction began on the original Spokane Ronald McDonald House in 1985. The facility opened in 1987 with 14 rooms, before adding eight more rooms in 2001.

Forness says proceeds from the nonprofit's annual high-profile fundraising events, the Polo Classic and the S-K Ball, will continue to be used for operations costs, rather than the capital campaign.

This is the first capital campaign the organization has held in the area, Forness says.

"We've been able to expand and increase our services without a capital campaign, including the expansion in 2001," he says. "We'll be working with very loyal and dedicated donors, as well as new donors, over the next 24 months to raise the additional funds necessary."

Forness says the second Ronald McDonald House will provide 12,410 nights of lodging each year, in addition to the 8,030 nights provided by the first Ronald McDonald House. The nonprofit covers the $32 per day cost of housing a family, as well as providing other services for free. One of those services is transportation to and from hospitals, Forness says.

"A lot of these families come from the outlying areas, rural communities, small towns," he says. "The logistics of going from here to the hospital are sometimes overwhelming when the child is ill."

Forness says financial difficulties can be an additional source of stress for many families who stay at the Ronald McDonald House.

"We don't want families paying for a hotel when the medical expenses are already going to strain their financial resources," Forness says.

"The special part about Ronald McDonald House is that these families are all staying here for similar reasons, so they provide support to each other," he says.

When the second Ronald McDonald House is completed, the resulting campus will have a total of 56 rooms available to families of children receiving health care in Spokane. Forness says the extra space will allow the nonprofit to be able to meet the need for such families for at least the next 20 years.

"Spokane is a medical hub with a lot of specialized pediatric services," he says. "We see this part of the medical community growing."