A tsunami of interest in Tsunami Products 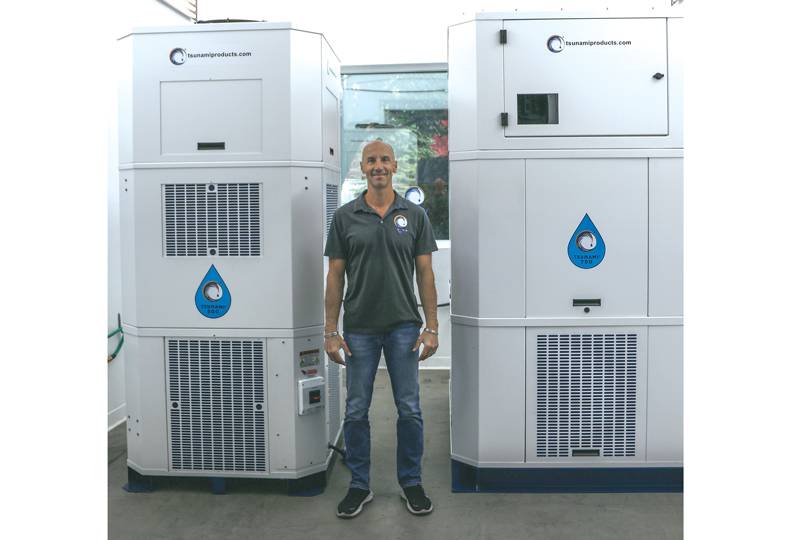 A recent news story out of California has generated a tsunami of interest in a Liberty Lake manufacturer.

That company, Tsunami Products Inc., manufactures atmospheric water generators, which are large outdoor appliances—taller than a typical household refrigerator—that pull moisture out of the air and convert it into potable water.

Kevin Collins, president and CEO of the 4-year-old manufacturing concern, says the company had made 20 units in the 18 months before the Associated Press reported on the generators in a story that hit news outlets in early October. Since the article came out, Tsunami Products projects to receive 50 orders by the end of the year, Collins predicts.

He declines to disclose the company’s revenue, citing interest from investors. He says, however, Tsunami’s revenue has grown 1,500% between this year and last.

Homeowners in drought-stricken areas of the U.S. are buying the water generators—many after reading the article—with additional interest coming from humanitarian and commercial organizations around the globe as well.

Premier Manufacturing employs between 88 and 100 employees, some of whom do work for Tsunami Products, Collins says. “We’ve been trying to hire for two years and have not ever filled all the voids.”

There are approximately 20 positions currently open, according to Collins.

The company’s name came about from the idea that the atmospheric water generator, “creates so much water it’s like a tsunami,” Collins boasts.

Tsunami Products atmospheric water generators range from medium-scale models, made for residential households, to industrial-scale models, suited for commercial and business needs. The Tsunami-500 model, which stands about 7 1/2 feet and spans 3 1/2 feet wide and thick, is priced at roughly $30,000.  The Tsunami-750, a commercial model, can cost up to $50,000, Collins says.

The atmospheric water generators work by pulling the air into the unit with fans that filter dust, pollen, and other airborne particles. The air is drawn through a series of condensing coils and water vapor gets cooled down to the dew point. Water is then forced through an extraction chamber, which uses the Tsunami core technology, that extracts a greater amount of water and is then collected in a storage tank. Next, the collected water is filtered of impurities and pathogens and is ready to drink, Collins explains.

The water generators work best in climates of 80 degrees Fahrenheit and 80% relative humidity, and the unit’s ideal climate for the technology lies within 10 to 15 degrees north and south of the equator. In those climates, the Tsunami-500 unit can make about 500 liters of water per day, which works out to a range of 180 to 200 gallons.

“If you’re in the Los Angeles area, San Francisco, or San Diego, those areas have climates that typically don’t freeze and we can make water at anything above 50 degrees Fahrenheit,” Collins says. “It doesn’t typically work in cold climates. You have to have airflow and circulation, and you have to be able to get humidity in.”

A Canadian company initially hired Collins to provide research and development for the air-to-water conversion technology, but after six to eight months without payment for his work, he decided to patent his ideas and products and manufacture the machines himself, Collins says.

“We did agree that there was actually a need for this in the world and we had our eyes closed to it,” he says. “They opened our eyes to it, and we said, ‘We can do better than anything out there. We can control the manufacturing.’”

Tsunami Products also manufactures machines for different uses that are powered by the atmospheric water generators.

The unit maintains an ideal environment to sprout nutrient-rich animal feed in addition to producing enough water for the livestock to consume year-round, Collins asserts.

“Every day you dump a row of trays out which equals about 15 to 17 acres of super green food for these animals that they can’t get just naturally roaming around,” Collins says.

Another unit, Tsunami-R/DH, controls the climate inside a greenhouse by collecting excess humidity, which is then condensed into reusable water for irrigation, he says.

Tsunami Products was founded in 2017 by Collins, Ted Bowman, and Chuck Lormis. The company is owned by Kevin Collins, and his wife, Keri Collins, who is also president of Premier Manufacturing. Additional owners at Tsunami Products include Kent Jacobs, of R&R Heating & Air Conditioning Inc. and another owner, who Collins declines to name.

Retired Spokane-area businessman Mark Fralich, a board adviser for Tsunami Products, says he’s been overwhelmed by interest in both the water generators and in the company itself, with numerous calls asking about how to purchase a unit or how to invest in the company.

Fralich says he sees a growing interest to invest in the privately-held company because of drought conditions in California and around the globe.

“I’m overwhelmed with calls and emails from people calling about our stock symbol and wanting to invest,” he says.

Fralich says the water generators are a good water source for those who want to live off the grid, because the units can run on solar power. And for those who are considering drilling a well to access water, or those who live in an area with a moratorium on drilling, Tsunami’s units can replace the need to drill a well, which Fralich says isn’t guaranteed to reach sustainable water levels anyway.

Tsunami Products currently is awaiting approval for a couple of patents right now, Collins says. One patent is pending for the Tsunami core technology, and another is for the fodder unit.

That said, Collins makes clear that Tsunami didn’t create the idea for the atmospheric water generator.

“It’s an old technology, but the efficiency is where we are,” he contends. “We have modern technology, electronics, and our patents, and the way we do things, we’re able to (offset) the power draw and the cost of that.”