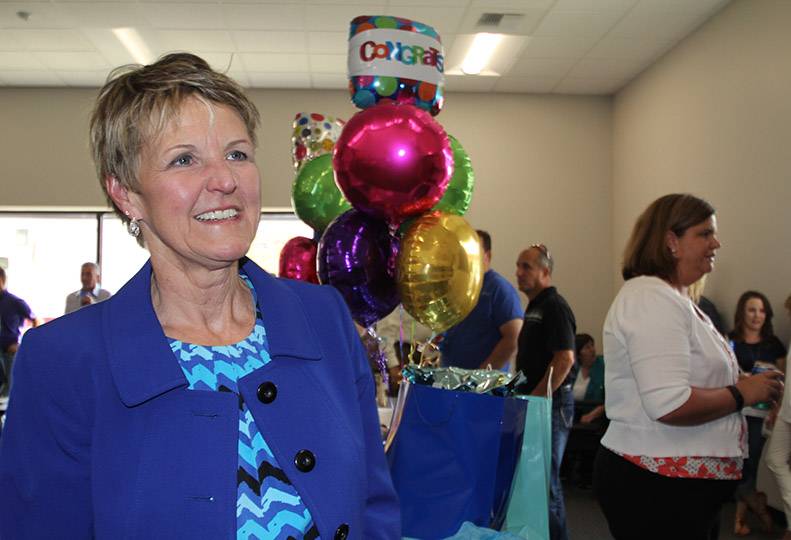 -—Judith Spitzer
Kate McCaslin, former president and CEO of Associated Builders & Contractors’ chapter here, will lead a chapter in Pennsylvania with twice as many members and twice the annual budget.

Kate McCaslin, former president and CEO of the Inland Pacific Chapter of Associated Builders & Contractors Inc. is leaving Spokane to take a similar position at ABC’s Keystone Chapter based in Lancaster County, Pa., after working for the chapter here for 18 years.

The chapter is an affiliate of a national trade association that seeks to advance merit shops and the construction industry.

Gregorio Rodriquez, currently an ABC vice president here, will serve as interim president until a selection committee names McCaslin’s successor, which the association says might happen this fall.

McCaslin, whose last day in Spokane was last Friday, says she was drawn to the idea of taking on a new challenge.

“I have so many friends here, wonderful staff and colleagues, but this is an exciting opportunity that I could not pass up,” McCaslin says.

As president and CEO of the Keystone Chapter, one of the oldest and largest ABC chapters nationally, McCaslin says she will be managing a bigger budget and larger membership than she’s managed at Spokane’s chapter.

“Everything is about double at the Keystone chapter. There are 600 members, the budget is about $2 million, and there are 15 staff members there,” she says.

To a large degree, McCaslin is following in her mother’s footsteps.

ABC’s Spokane chapter was started by her mother, Donna Meidling, in the early 1980s with only 20 members. Meidling grew the membership from 20 to about 100 mostly commercial and industrial contractors, before leaving Spokane to run the ABC chapter in Chicago in 1986.

That’s when McCaslin took over the Spokane chapter as executive director. She had worked as the membership director for the organization since 1982 after graduating from Washington State University and spending two years studying law at Gonzaga University. She regrets not having finished law school, but says she gained an enormous amount of knowledge that she has used nearly every day in her career and life.

From 1986 to 1990, McCaslin served as the Spokane chapter’s executive director and then decided to do something different.

She took off several years to start her own business and then in the mid-1990s decided to run for Spokane County Commissioner. In 1996, she defeated incumbent Commissioner Steve Hasson, a fellow Republican, in the primary election. After easily winning in the general election, she went on to serve two four-year terms.

She then stepped down as commissioner and returned to ABC in 2005 to become president and CEO.

She says she doesn’t miss Spokane’s political arena much.

“I did my time of contributing to the community. And I like watching it from afar much more,” she adds.

As a fiscal conservative, she’s been involved in politics “for a lot of years,” she says, whether as a candidate or activist for causes in local and state GOP offices. McCaslin’s late husband, Bob McCaslin, served in the state Senate for 30 years. Bob McCaslin Jr., her son, has served in the Washington House of Representatives since last November, when he was sworn in early due to the resignation of Larry Crouse.

McCaslin says she’s always loved the values represented by ABC—a philosophy that encourages open competition and a free-enterprise approach that awards contracts based solely on merit, regardless of labor affiliation.

ABC has always been about 90 percent nonunion contractors, she says.

Today, she says the ABC organization has 70 chapters across the country, representing more than 20,000 members. And as president of an ABC chapter, part of her duties is to continue to be politically active.

The Pennsylvania chapter is one of the largest and oldest chapters in the country and she’s traveled back to that area quite a bit during her tenure as president here, she says.

McCaslin says she will still be working directly with many public entities and local and state government offices, even though the Keystone chapter has a full-time government affairs director.

“I’ll be more involved in strategic planning and very involved in those plans being executed,” McCaslin says.

“They have a very well established internship program as well, and a big education (component),” she adds.

McCaslin says she will manage a full membership customer relationship program “besides an apprentice shop and other services like health insurance events.”

Pennsylvania’s General Assembly has 253 members including a Senate with 50 members and a House of Representatives with 203 members, making it the second-largest state legislature in the country behind New Hampshire and the largest full-time legislature.

“It’s structured a bit differently as well, with very populous districts,” she says. “Nonetheless, the longer lawmakers are in session, the closer track you have to keep of them.”

McCaslin visited Lancaster several weeks ago scouting out the area for a rental where she plans to stay for about a year while she looks for an area where she’ll eventually buy a home.

She says Lancaster has about the same population as Spokane’s, which is about 210,000. “But greater Lancaster’s population is about 600,000 people,” she says. “They have way smaller towns and gorgeous old buildings. It was settled in the days of William Penn.”

Penn, who lived from 1644 to 1718, was an English real estate entrepreneur, philosopher and early Quaker who founded the Province of Pennsylvania.

McCaslin says she will very much miss friends and family in Spokane. “I have so many friends and so many community connections,” she says.

McCaslin says she’s looking forward to the change although it’s bittersweet and “it’s the perfect place to have a grand adventure … that’s how I’m thinking about it.”

ABC moved to its present location at 1760 E. Trent in early March from 12310 Mirabeau Parkway, in the Pinecroft Business Park in Spokane Valley, where it was located for about 10 years.

It is the sole tenant in a 6,300-square-foot space that includes 1,600 square feet of training space.