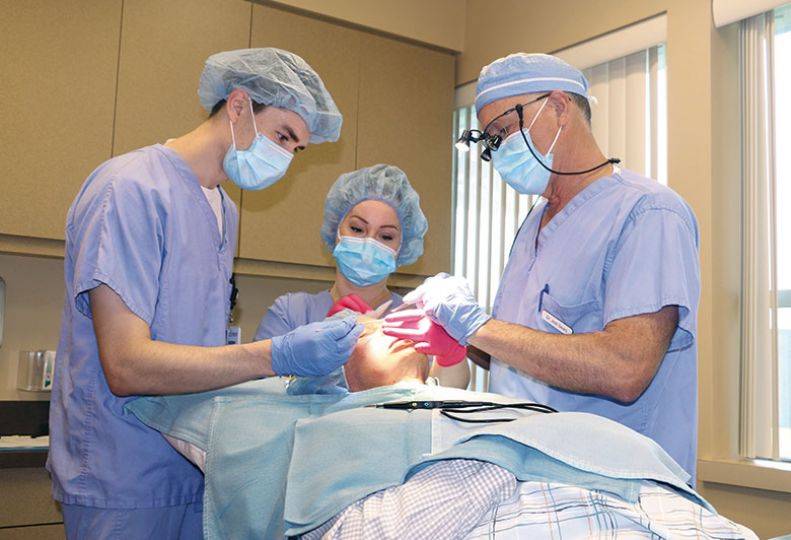 Dr. Joel Sears, founder of Spokane-based Advanced Dermatology & Skin Surgery PLLC, says he didn’t set out to develop a practice of a certain size or one that would dominate the Inland Northwest in that specialized area of medicine.

“I just tried to succeed and to surround myself with great people,” Sears says.

Since launching in 1991, with Sears as its sole practitioner, Advanced Dermatology has expanded to nine dermatologists, three physician assistants, and an advanced registered nurse practitioner, plus 68 support-staff employees at its three Inland Northwest clinics.

That size makes it the Inland Northwest’s largest dermatology practice, and it’s not done growing, he claims. The practice plans to add another doctor in August—a fourth dermatologic surgeon trained to perform what’s called Mohs micrographic outpatient surgery—and candidates are being interviewed for another likely dermatology position at the practice, Sears says.

On April 1, Advanced Dermatology more than tripled the size of its North Side clinic—one of three it now operates in the Spokane-Coeur d’Alene area—by moving it into the Mayfair Professional Building, at 5905 N. Mayfair, from a space on Queen Avenue. Sears says that clinic, occupying the entire 5,900-square-foot second floor of the two-story building on Mayfair, has the potential to see strong additional patient growth.

Operating from its 10,000-square-foot Spokane Valley hub clinic, at 1807 N. Hutchinson Road, where it has been located since 2004, Advanced Dermatology opened a Coeur d’Alene facility about six years ago in an 8,000-square-foot building at 1700 W. Riverstone Drive.

Of the practice’s geographical expansion, Sears says, “I’ve never been pushy to go anywhere. I think they were just underserved in dermatology in Coeur d’Alene.” One of the dermatologists there was getting close to retiring, he says, adding, “We saw that need for coverage over there.”

Advanced Dermatology calls itself a full-spectrum dermatology practice, offering diagnosis and treatment of a broad range of conditions such as acne, dermatitis, eczema, rosacea, scars, moles, warts, sun spots, spider veins, psoriasis, wrinkles, and loose skin. Sears asserts, though, that it probably has “a more medical bent” than some dermatology practices.

It offers brow lifts, face and neck lifts, eyelid surgery, and laser resurfacing, among other procedures, and—as a specialized health care provider for a sizable senior patient base—he says the practice handles a lot of skin cancer, including the most difficult cancer cases.

In particular, he touts Advanced Dermatology’s expertise in Mohs surgery, which is claimed in promotional literature to be the most accurate treatment for the total removal of skin cancer.

In this treatment, the Mohs physician serves as both surgeon and pathologist. The process involves the use of a microscope to trace and ensure removal of skin cancer down to its roots, says an Advanced Dermatology brochure describing the procedure. It claims Mohs, named after a physician, is the only skin cancer treatment that provides complete microscopic examination of all tissues surgically removed, as well as detailed graphic mapping for orientation purposes—hence the term micrographic surgery.

Sears says Mohs surgery ensures that all of the diseased tissue is excised, while minimizing the cosmetic impact on healthy tissue. Because such skin cancer is often on the patient’s face, he says, “We’re very conscious of that. We never take that cavalierly.”

Sears, who devotes his practice to skin cancer and facial surgery, underwent two years of fellowship training in Mohs surgery, facial cosmetic surgery, and laser sciences at the University of Iowa College of Medicine after completing three years of dermatology residency training.

Two other surgeons at Advanced Dermatology, Drs. Joe Cvancara and Chadd Sukut, have completed similar fellowship training, and all three are fellows of the American College of Mohs Surgery, an accrediting organization for that specialty. The dermatologist who will be joining the practice in August currently is wrapping up fellowship training.

An Iowa native, Sears earned his medical degree at the University of Iowa, which included a scholarship stint at Oxford University in England, and spent an internship year in San Diego before returning to Iowa for his dermatology residency.

Word-of-mouth encouragement about opportunities here for someone with his specialized training brought him to Spokane, he says. As a skiing enthusiast, learning that “you can be from your doorstep to ski slopes in 45 minutes” also was an enticement, along with the many other outdoor amenities here, he adds.

Sears initially occupied space in the Sacred Heart Doctors Building, at 105 W. Eighth, and says he “had to do some general dermatology just to keep things going” for a while before the growth of his practice enabled him to devote more time to more specialized pursuits.

He says Dr. Kenneth Gudgel and his wife, Helen, who were integrally involved in the Spokane-area health care sector and—like him—grew up in Iowa, were instrumental in his early success.

“They just kind of took me underwing and helped me get set up,” he says.

In the years since then, Sears says, the practice’s patient load and staffing have grown partly by responding to unmet demand and partly through fortuitous occurrences, including the unsolicited acquisitions of patients from several dermatologists looking to retire, move away, or join forces.

“It’s just been natural growth, which I think is good for any business,” Sears says, adding, “It’s been rewarding, and it’s been very satisfying.”

The practice now is owned by five of its dermatologists, including Sears. He downplays his own leadership role among the shareholders, saying, “Functionally, we work as a group. My philosophy has always been, let’s keep this equal.”

Advanced Dermatology’s growth over the last 10 years suggests that it might look to continue broadening its geographical reach in the years to come. Sears says the practice is always open to evaluating opportunities and has been urged to consider opening offices elsewhere in the Inland Northwest.

The practice, however, is cautious about expanding too quickly and doesn’t have any plans for now to open other offices.

Sears says a big part of his personal satisfaction and sense of accomplishment in dermatology comes from helping rid patients of skin cancer and in doing so in a way that leaves no disfiguring scars. Another significant reward, he says, is getting to know many of his patients personally over the course of multiple visits and treatments.

He says it’s sort of like “I don’t operate on patients anymore; I’m operating on my friends,” and he’s able to chat with them while operating on them, since they’re conscious during the outpatient procedures.

Sears says his workload hasn’t diminished, but he manages to find time for leisure pursuits. Along with being a skier, he is a private pilot and enjoys collecting and working on antique clocks, the latter with guidance from Nat Williams, of Spokane Clock.

Though Sears is approaching what might be considered retirement age, he says, “I have no plans to retire any time soon. Frankly, I love what I do. I like to say that I’ve never had to work a day in my life.”