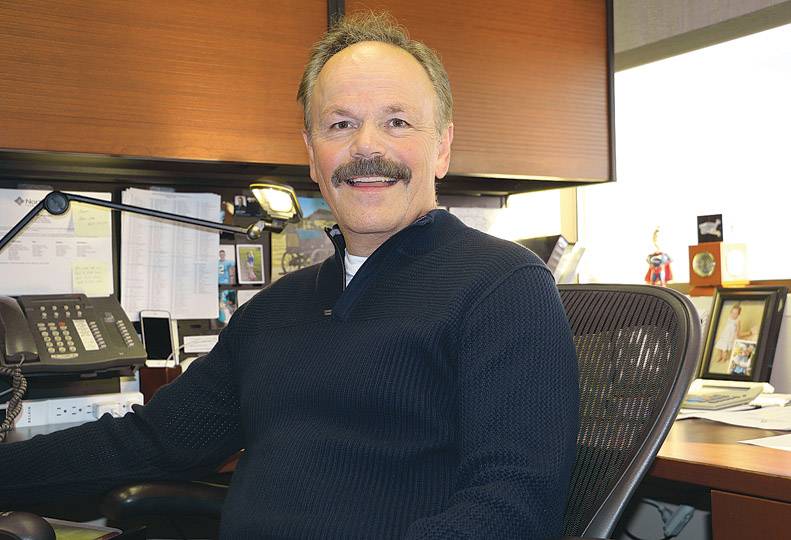 While commercial and other kinds of loans have taken a hit over the years since the economic recession, agricultural loans have remained more robust, some industry leaders here say.

“By our charter, we’re limited to focus completely on agriculture and rural America, and it’s been that way for 99 years,” he says.

DePell says that in 2014, the co-op saw its owned and serviced loans grow about 9.5 percent, mostly in its term loans and real estate. For 2015, it’s anticipating somewhat slower, but still decent growth of about 4 percent to 6 percent, he says.

“People are a little more cautious right now,” he says.

The largest share of loans made by Northwest Farm Credit go to the dairy industry, DePell says. Second is forest products; cattle and livestock are third. Fruit and tree nuts are fourth, and small grains are fifth. All of the co-op’s loan volume is related to agriculture or rural homes and businesses, DePell says. It employs 650 people total, 200 of whom are in Spokane, and a total of 45 branch offices.

Wheatland Bank, which is headquartered at 222 N. Wall here, saw about 14 percent loan growth in 2014, and expects to have almost twice that rate of loan growth this year, says Susan Horton, its president, CEO, and chairwoman.

About half of Wheatland’s loan portfolio is based in agricultural lending, Horton says, and the other half is commercial lending.

“We have ag lenders in every one of our agricultural markets, and those decisions are made there (at the branch), not by someone out of the area,” Horton says.

The bank has about 110 employees total, Horton says, and she estimates at least 75 percent of those employees are involved in agricultural lending or banking services.

Jay Lewis, senior vice president and Inland Northwest group manager for Spokane-based Washington Trust Bank, says that as of the end of last year, agricultural loans made up about 6.5 percent of that institution’s total loans.

The third area the bank focuses on is row crops, Lewis says, such as potatoes, corn, and hay, which are grown predominantly in southern and central Washington.

The bank, which has about 845 employees total, has three to five agricultural lenders working directly in each of its key agriculture markets, Lewis says. In Washington, those markets include Wenatchee, Pullman, Clarkston, and the Tri-Cities. In Idaho, they are Moscow and Lewiston.

“Each of those areas has a specific subset of crops they grow,” he says. “We find it important to have people there who are experts in those crops.”

Horton says that when Wheatland first opened in Lincoln County 35 years ago, it concentrated on the dryland farming market there.

“Most of our expansion has been into other markets where we could have a big impact on agriculture lending,” she says. “We continue in dryland, but diversify with other kinds of crops. In the Columbia Basin, there are lots of irrigated farming, hay, potato, and row crops. Then in the Wenatchee and Chelan areas, you get more into orchards.”

Getting into different markets is important to survival in the agriculture lending industry, Horton says.

“We’re very well diversified within ag lending, which is good because if one commodity has a bad year, you’re better able to weather that,” she says.

Agricultural lenders need to have a lot of specialized knowledge about farming, ranching, and other aspects of agriculture, Horton says.

“Often, that means an ag lender will have a different kind of background,” she says. “Sometimes, we see our best ag lenders were raised on a farm or worked on a farm … they have that hands-on working knowledge of the industry and the passion for it.”

The lenders also need to understand how volatile commodity markets are, Horton says.

DePell also says that agricultural lenders need to have a special interest in the industry.

“Number one, they have to have a passion for agriculture,” he says. “Many employees here were raised in agricultural or rural families … I think the customer can tell.”

“Farmers and ranchers want to do business with someone who will stay with them through the cycles,” he says. “Ag loan officers also need to be able to talk to customers about risk management.”

Lewis says agricultural lenders need to understand challenges specific to the industry, such as weather and finding labor.

“It’s different, perhaps, than other industries, because … you put all these inputs into the ground over the course of the year, starting in March, April, or May, and plant it, fumigate it, till it, and it isn’t until the fall that you realize whether you’ve got a crop or not,” he says.

Also currently challenging the industry are the recent slowdowns at some West Coast ports, which are the result of a labor dispute between the Longshore & Warehouse Union and the Pacific Maritime Association, which negotiates and administers agreements with the union.

Horton says, “It’s impacted some farmers in their ability to get their crops shipped out in as timely a fashion as they’d like to.”

Lewis agrees that the labor dispute is affecting agricultural businesses.

“As we’re discovering today, you have to worry about the delivery of getting your product to market,” he says.

DePell says that financial institutions also offer often succession planning services to agricultural customers, which can be a big deal in farming.

“We started a business management center, and all those people do is work with people in agriculture with farm transition planning,” he says. “I think that’s something that’s really important.”

“It’s one of the biggest issues farming families have to deal with,” she says.

In the industry overall, Horton says that dryland farming didn’t have as good a year last year as it did the few years earlier. Expenses also rose last year, she says.

“But, farmers were in such good condition heading in, we haven’t seen that impact them in a negative way,” she says.

DePell says interest rates have been historically low in the agriculture lending industry. He says that in the last four or five years, farmers and ranchers have been taking advantage of the low rates.

“We see a lot of customers doing capital improvements, such as replacing irrigation systems or farm buildings,” he says.

“What we see in that area is there’s a lot of demand from people who want to buy more ag land, but there’s not much supply,” she says. “Whenever something does come available … there’s a lot of competition.”

Another trend that both DePell and Horton are noticing is that the current younger generations of farm families are choosing to return.

“From a lender’s perspective, we’re seeing a younger generation return to the farm at unprecedented levels,” DePell says.

Northwest Farm Credit has a loan program called the Ag Vision Program that’s at targeted at small and young farms, he says. Part of the focus of that initiative is to get younger generations back into farming, he says.

“We grew that portfolio by 21 percent last year, and grew the number of customers in that program by 24 percent,” he says.

Horton says, “Back in the ’70s and ’80s, I think that trend wasn’t there. Now they’re having more success and better profitability, and are sending their kids out (to college) to get better knowledge.”