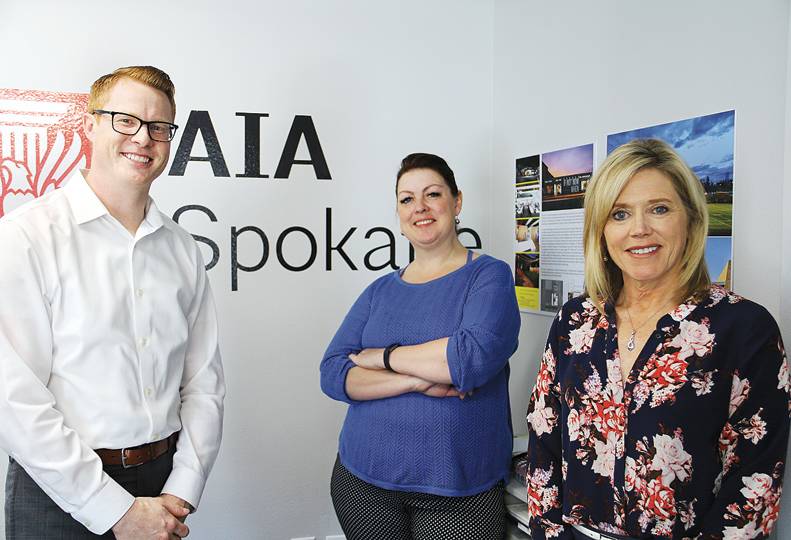 -—LeAnn Bjerken
Left to right, David Buescher, Becky Blankenship, and Stephanie Aden are involved in the Spokane chapter of the American Institute of Architects.

When most of us think of architects, we probably think of building designers and creative types, rather than leaders in promoting beneficial social and environmental change.

However, representatives with the Spokane chapter of the American Institute of Architects say those in their profession are well-suited to help find solutions regarding these issues.

“Right now, we’re seeing a push in the industry to do more, particularly in the area of welfare, which includes issues like homelessness and creating designs that benefit all demographics,” says David Buescher, past president of AIA Spokane and architect with Spokane-based Integrus Architecture PS.

AIA Spokane’s current president, Becky Blankenship, an architect with Spokane-based ALSC Architects PS, agrees that architects are well positioned to take on social issues as they relate to building safety and design.

“We’re problem solvers,” says Blankenship. “That’s why it’s important to include us on community planning boards and commissions, because we can bring a different perspective to a lot of issues.”

Founded in 1857, AIA is a national organization that now includes over 94,000 members in over 200 chapters worldwide.

Stephanie Aden, executive director of the organization’s Spokane chapter, which was founded in 1940, says there are six chapters in Washington state, including the AIA Washington Council, which mainly serves to advocate for the architecture industry at the state level.

“Our organization’s goal is to educate members, advocate for the profession on local, state, and national levels, and meet with representatives on various issues,” she says.

The AIA Spokane chapter operates out of a newly renovated 300-square-foot office space in the Courtyard Office Center, at 827 W. First, downtown. It currently has 200 members, all of whom are architects or associate architects, with some retired architects who have lifetime memberships.

Aden says the Spokane AIA chapter is governed by a nine-member executive board that meets once a month at the current president’s office.

The organization’s membership includes architects from about 45 Spokane-area architecture firms and other companies or organizations that employ staff architects including; the Washington State University School of Architecture, Gonzaga University, the City of Spokane, and Garco Construction.

Aden says AIA membership has several benefits, including access to continuing education classes and events, comaraderie and networking connections with others in the profession, and the chance to serve in leadership roles on the chapter’s executive board.

Buescher says AIA Spokane is advocating for several issues both nationally and at the state and local levels.

“At the national level we have things like Blueprint for Better, which is a movement toward sustainability in urban environments,” he says. “That’s a campaign started back in 2015 that’s working toward creating more livable cities that are open to all demographics.”

Buescher says the AIA also has formed its Committee on the Environment, which focuses on information and resource sharing among professionals in the local sustainable design community through monthly presentations, case studies, discussions, and tours.

Buescher says COTE is working toward the 2030 Challenge, an initiative started by architect and researcher Edward Mazria. The movement asks the global architecture and construction community to adopt a series of greenhouse gas reduction targets for new and renovated buildings by 2030.

“There’s a big push right now to give architects the tools and design modeling technology they need to try to reach that goal,” says Buescher.

“We have the technology to do net-zero projects, we just need to work on educating architects and clients on the strategies and implementation portion,” he says.

Aden says AIA Spokane’s executive board and officers attend national conferences to receive training, advocate for issues, and bring back that knowledge to share with local professionals.

“On a national level, AIA is pushing for tools and resources to teach us how to advocate with our legislators,” he says. “The AIA Washington Council hosts two advocacy conferences each year in spring and fall, one of which will be hosted in Spokane this month.”

Buescher and Blankenship say these conferences provide reviews of architecture-related laws passed in the Legislature the current year, and outline issues of importance for the next year.

“In addition to conferences, AIA chapters are invited to Olympia every January to advocate for issues of importance,” says Blankenship. “It’s a good opportunity to sit down with legislators and talk over concerns, as well as build relationships with them.”

“Every legislative session brings building code updates, and tax effects, as well as the chance to talk about new technologies like cross-laminated timber as well as sustainable and alternative building techniques,” adds Buescher.

Blankenship says one example of a larger issue architects might be able to provide perspective on is that of school shootings.

“Architects aren’t experts in mental health or gun access of course, but we do know a lot about building and safety standards,” she says. “So, we want to use that experience to help create safer designs for our schools.”

Both Buescher and Blankenship say Spokane-area architecture firms face some challenges in the form of competition from West Side firms and finding skilled workers.

Buescher says, “The good news is that as technology advances, we’re able to use those new tools to coordinate, and complete projects faster and more effectively. Most larger firms have also become diversified enough that they’re able to sustain enough work to remain successful.”

The two say alternative delivery methods like design-build and general contractor/construction manager, continue to gain prevalence, as does interest in sustainable and energy-efficient design.

“These are projects where we work closely with contractors for a more integrated project delivery, which has the benefit of shortening timelines and saving money for owners, while maintaining the same quality of work,” says Blankenship.

Blankenship is a co-founder of the Design Build of America chapter here, which recently has helped to reevaluate laws pertaining to design-build projects. She says the state also recently developed the Capital Projects Review Board, which will review the guidelines for GCCM to make them more effective.

Buescher, meanwhile, is on the design review board for the Spokane Arts Commission, and the Spokane City Council’s Sustainability Action Committee, which is focused on helping the city meet renewable energy and greenhouse emissions reduction goals and met last month for the first time.

“Locally, we’re starting to see a lot more people recognizing the influence of climate change on design,” says Buescher. “They want to understand how their homes affect energy costs as well as their health and well-being, and they realize they can get a better building by being more attentive to sustainability in design.”

“Many people, particularly the younger generation, are now looking for smaller, more efficient urban spaces, because they offer a lower cost of living, and are closer to transportation,” adds Blankenship.

“We host one lunch and learn event every month, along with one project tour event,” she says. “Both of those types of events provide our members with continuing education credits, that enable them to keep up with their licensing requirements.”

Aden says AIA Spokane also hosts a variety of events throughout April, which is International Architecture month. This year, the organization hosted 12 different events that concluded with the Student Design Awards competition on April 25.

The Architecture Design Award competition seeks to honor works of distinction designed by AIA Spokane members and to bring public attention to outstanding architectural services rendered by its membership.

“We usually choose one third- or fourth-year studio class from each college to participate,” he says. “We’ve found it works best if students compete only with others from their same class, and each of the schools receive awards for the top three best designs.”

Every other year the student event coincides with the organization’s Architecture Design Awards, and the two are hosted at a combined event that allows the groups to interact.

“We like to give students a chance to see the professional industry’s winning designs, as well as tour firms and talk with the architects who designed them,” Buescher says. “Part of what we want to show the students and help them understand is that it’s possible to do great work right here in Spokane.”