‘Airbnb for weddings’ launches in Spokane 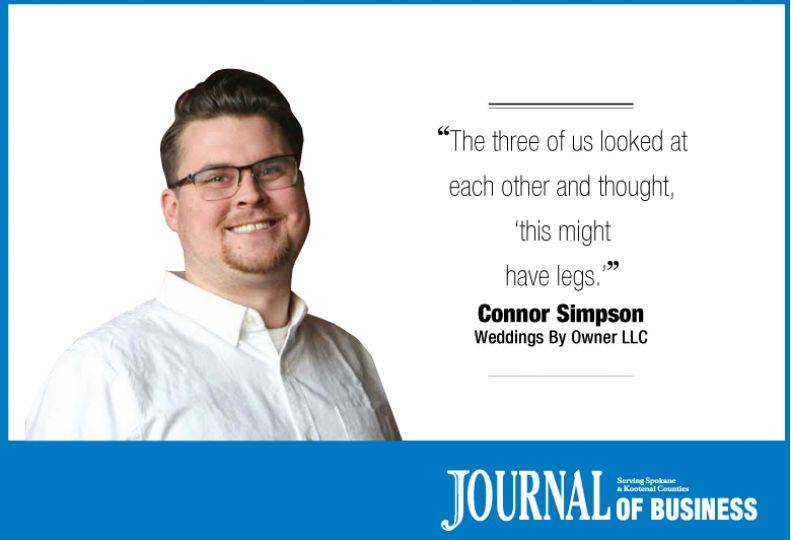 Two recognizable names in the Spokane startup community are involved in launching Weddings By Owner LLC to offer a wider selection of wedding venues at a more affordable rate.

Simpson and Herrington, both of whom are involved in the company’s day-to-day operations, think the business has the potential to do for couples seeking a wedding venue what Airbnb does for people looking to rent short-term lodging.

Allen, who is a founder and adviser of Weddings By Owner but isn’t involved in day-to-day operations, says he agrees with Simpson and Herrington.

“In the same way Airbnb was disruptive to the hotel and lodging industry, I see Weddings By Owner as having the same ability to break the stranglehold on wedding venue services,” says Allen, whose company Stay Alfred offers urban vacation rentals nationwide.

Allen declines to disclose how much he’s invested in Weddings By Owner. However, he says he’s putting money into the company on an as-needed basis, instead of investing a specific amount.

Connor Simpson says Weddings By Owner seeks to act as a broker between wedding venue operators and engaged couples, while receiving 30 percent of service fees in exchange for every wedding booking. The company is looking to secure bookings starting next month.

Simpson is the company’s only full-time employee and currently works out of his home. There’s no timetable as to when the company may add future employees, he says.

The company’s website currently lists 18 venues—mostly ranging from Central Washington to Western Montana—with facilities and space appropriate for weddings and receptions that homeowners and property owners are willing to rent out for extra income, Simpson says. He says the property owner isn’t responsible for catering the event, which still remains the responsibility of the wedding party.

Says Allen, “We’re already in that vacation space with Stay Alfred. It’s a space we know. We think we’ll see hundreds of venues added to the site in time.”

He, Herrington, and Simpson started the company eight months ago with the goal of offering couples a better selection of wedding-and-reception locations than what most cities and communities across the U.S. have available. Meanwhile, home and property owners have the ability to generate income from the wedding party, he says.

Says the 29-year-old Herrington, “When you really look at it, most everyone in any city gets married in a handful of places.”

Credited by her partners for coming up with the idea, Herrington adds, “It’s weddings in the same traditional locations, mostly in the same hotel ballrooms.”

Due to limited spaces, Herrington says, wedding venues “can get away with charging several thousands” to couples for use of their facilities. “And then if they’re booked out, what options are left?” she says.

Simpson’s father, Tom Simpson, thinks Weddings By Owner will experience success. Simpson also is a co-founder of online retailer etailz Inc., which announced in October 2016 it had been acquired by a New York company for $75 million.

Tom Simpson, who’s not involved in any capacity with Weddings By Owner, says, “I’ve been to all five or six wedding venues Spokane has to offer several times now. This company has a palette of venues, and the list will only grow.”

Based on information Simpson obtained from a paid subscription service called The Wedding Report, the average wedding venue in Spokane County costs $3,700, he says. The average cost for a wedding venue among the 18 sites listed by Weddings By Owner currently is $1,845.

One of the more recent wedding venues the company gained access to for wedding space is in the heart of downtown Spokane in 11,300 square feet of space at 518 W. Riverside, next door to Dodson’s Jewelers, Simpson says.

Spokane investor John Pariseau last year acquired the building with Tom Simpson and two other investors, Connor Simpson says. The historic building, built in 1890, has been completely refurbished with a contemporary design. Simpson says it’s capable of holding up to 100 guests for a reception and costs $1,380 to rent.

The Weddings By Owner concept first emerged during drinks among friends at a San Francisco restaurant roughly 18 months ago when a game of “Shark Tank” suddenly broke out.

Connor Simpson, formerly a project manager at Stay Alfred, was in the Bay Area with Allen on a business trip. Also with them was Tim Barrish, who serves on Stay Alfred’s board of advisers and happens to be longtime friends with Herrington. Barrish was the one who made arrangements for Herrington to meet with him, Allen and Simpson.

Says Herrington, “It was a social gathering. There was no intention of getting together to start a business.”

Herrington says she tried to excuse herself because she had to leave for a wedding the following morning at Lake Tahoe. Barrish, Allen, and Simpson persuaded her to stay. Then they pressed her to make her business pitch.

Simpson describes it as follows, “She says, ‘You know how people are looking for more exotic and different wedding places, well, what about a business that does the same thing for weddings that Airbnb or Stay Alfred does for travel?’”

“The three of us looked at each other and thought, ‘That might have legs,’” Simpson says.

“What makes us unique is that we like to be unique,” she says.

As for Simpson, he says a previous failed startup has helped him temper his enthusiasm for a business idea, while it also helped him to understand the importance of doing extensive research before pursuing an idea.

Simpson was the co-founder of a 2013 online venture called Barters Closet, which served as an online network for connecting to others who shared his taste in sweaters.

He’d hoped to generate revenue through a 15 percent commission on paid transactions. He shut it down after a few years and ultimately went to work at Stay Alfred.

Simpson says now, after that failed attempt, he will continue to remain a “pessimistic entrepreneur.”