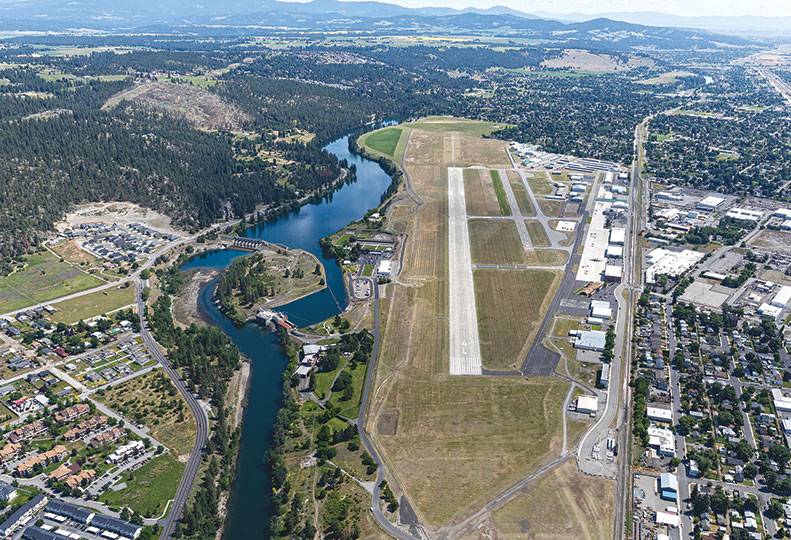 -—Spokane Airports
Located on the eastern edge of Spokane, Felts Field is expected to become home to the bulk of general aviation services in the Spokane area in coming years.

The Spokane Airport Board has developed a new master plan for Felts Field that calls for extension of the primary runway, adding new hangars, and replacing the air traffic control tower at the 400-plus acre general aviation airport in East Spokane.

The master plan was completed by New York-based aviation consulting group WSP USA and funded through a $680,000 grant through the Federal Aviation Administration, says Todd Woodard, director of marketing and public affairs for Spokane International Airport via email correspondence.

WSP recommends in the master plan that Felts Field’s 4,500-foot-long primary runway be extended by 1,000 feet. The consultant also recommends adding 32 new hangars at the airport.

Woodard says the airport board intends to pursue funding to extend taxiways to 13 acres of undeveloped land north of the airport that supports future hangar development.

WSP recommends relocating the tower to address the line-of-sight issues. By relocating the air traffic tower to a more strategic location, the airport will be able to use about 3 acres of land at the current tower site to accommodate about 26 small to midsize hangars, the consultant advises.

The primary runway extension isn’t planned for another seven to 10 years. Meantime, the airport board is planning a full restoration of the current runway, including lighting by 2025, says Woodard.

He declines to estimate the cost of the proposed improvements, and funding hasn’t been finalized, although he says the airport board is in discussion with the FAA regarding potential funding.

“The investment is unpredictable as it will depend on the availability of grant funds,” says Woodard of the envisioned capital projects.

The last major item on the master plan is renovating the terminal, an Art Deco building, which was constructed in the 1930s.