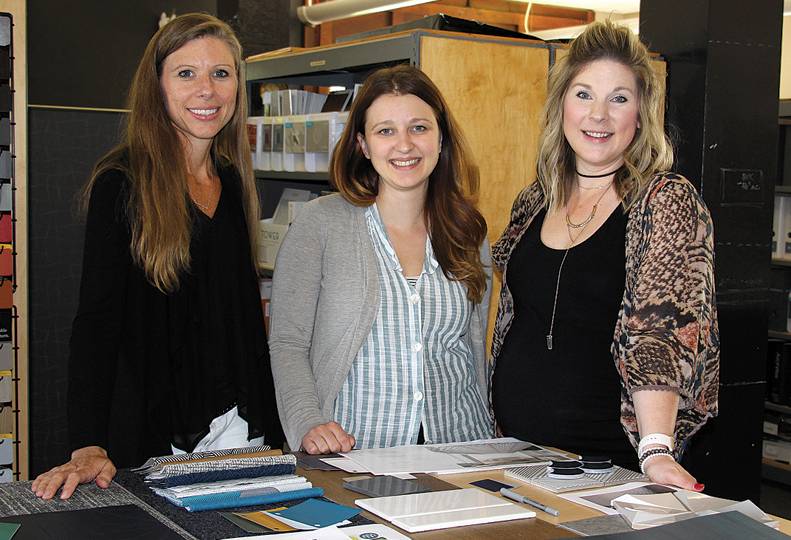 About 32 years ago, the founders of interior design company Design Source Inc. decided to branch off from the architecture firm under which they’d been employed in order to focus exclusively on design. Today, Design Source has found a place at the table alongside the rest of the project planning team, says owner and principal Angie Cashen.

The company also is taking advantage of technology to streamline the design process, Cashen says.

Design Source founders Nancy Croyle and Susan Dellwo began the firm with the intent to provide thorough, comprehensive design services, Cashen says. Cashen bought the business in 2013; Croyle remains with the firm as a principal and project manager.

About 80% of the firm’s business comes from repeat clients, which include Washington Trust Bank, Northwest Farm Credit Services, and the Kalispel Tribe of Indians, Cashen says.

Some of the firm’s recent projects include the Kalispel Tribe’s new casino in Cusick, Washington; the Empire Fitness gym near Gonzaga; and the Rover.com space in the Wonder Building downtown.

Design Source also is designing the Wonder Market, a 12,000-square-foot space that will feature food and beverage kiosks on the first floor of the Wonder Building, including the High Tide Lobster Bar and an Evans Brothers Coffee stand.

“With the 3D model, I was able to coordinate with the building owners, who are in Denver, the Evans Brothers Coffee owners, who are up in Sandpoint, and then High Tide, here in Spokane,” Lange says. “Everybody has been able to see what their space will look like. The owners have been able to get buy-off of everybody, along with working with equipment vendors. Spending the time doing this up front helps with an approval process and helps with documenting, because I’ve got everything I need approved.”

Cashen says Design Source handles about 100 projects each year; the firm’s annual revenue is about $800,000.

All seven of the firm’s employees, six of whom are designers, are female.

“We’re a working-mom office,” says Lange. “We have dogs and babies and families coming by throughout the day.”

Cashen joined Design Source as an intern in 1996 and says the firm’s employees found themselves working to gain the trust of a male-dominated architecture industry.

That’s changed, Cashen says, as the architecture industry has come to realize how a designer can help plan a project thoroughly, and how designers can manage aspects of a project that might otherwise be overlooked.

“That had not happened until probably four years ago,” Cashen says.

Now, Cashen says, designers find themselves having conversations with electrical engineers from the beginning of the design process about electrical outlet locations and circuiting, taking much of the guesswork out of the process for all parties involved in a project.

In recent years, Cashen says she’s seen more architecture firms hiring interior designers as project teams have come to understand how many aspects of a project a designer can handle or help with.

Lange adds, “We really consider (a project) from the beginning, from a floor plan perspective, all the way through to the end when it’s installed and in use, and even at a post-occupancy walk-through a year later to see how it’s performing. Ultimately, we want to be thought of as collaborative consultants … whether we’re collaborating with a contractor, an architect, or a furniture dealer.”

However, even as design is being understood better by the those in the architecture and construction industries, Cashen and Lange say they’re concerned that some people don’t realize there’s a difference between designers and decorators. The design industry has been pushing for state and federal legislation that would require a standard certification, such as the National Council for Interior Design Qualification in order for someone to hold the title of designer.

“Anybody can call themselves a designer,” Lange says. “It’s not controlled at a consistent level across the states.”

Cashen adds, “There are designers out there without qualifications trying to do work, and contractors review their stuff and go, ‘This is a mess, this is a disaster.’”

A standardized certification would differentiate a designer from a decorator, Cashen contends.

“We want to own interior design,” she says. “A decorator doesn’t get into the details of drawing floor plans.”

Cashen says part of the concern relates to the health and safety aspects of design that certified designers are trained to consider and plan for, such as emergency exits.

“If you look up the definition of interior design, health and safety of the public is our thing,” she says.

That can include considerations such as whether an office environment is too crowded or loud, creating stress instead of focus. For example, Design Source regularly receives design requests for open office plans, but Cashen asserts such plans rarely work for most companies. Designers at the firm ask questions to determine whether an open office plan would be effective or disastrous.

Asking such questions can be vital to creating the perfect space, project designer Brianna Musser says.

“It’s about finding the balance of what their aesthetics are, and then meshing it with the budget and functional considerations, along with everything else, like equipment and lighting and furniture,” Musser says.