Youth team to compete at national level in May 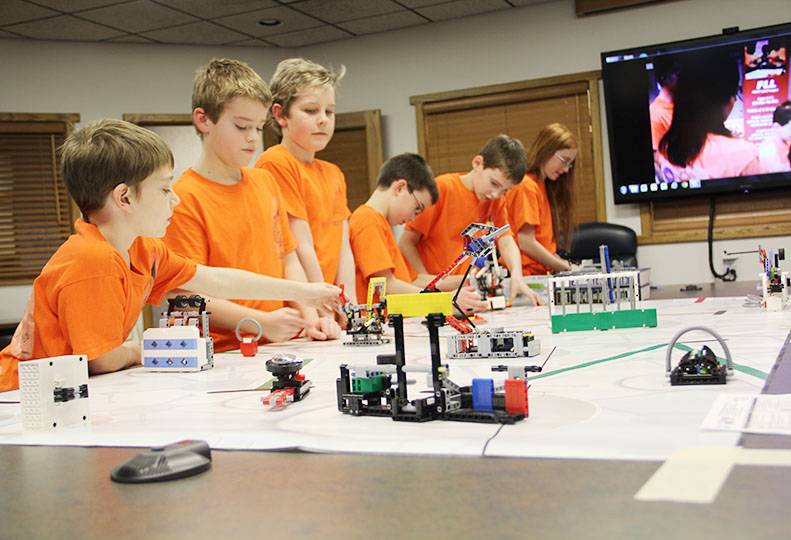 Alliance Machine Systems International LLC, the Spokane Valley-based manufacturer of products and services for the paperboard packaging industry, is sponsoring a team of kids, called the Super Garfields, to compete in robotics competitions.

The team, which competed at the state level in January, is heading to the national competition at LEGOLAND in Carlsbad, Calif. in May, says Craig Gendreau, engineering supervisor at Alliance and the team’s coach.

Mark Duchesne, Alliance’s president and CEO, says, “Primarily, we became involved because Craig (Gendreau) is an employee here. He had a team, and we learned about it … he needed a sponsor, and were very interested in helping out.”

Gendreau says the Super Garfields are a Junior First Lego League team. The league holds tournaments in which the teams compete in a series of challenges, including research project presentation, teamwork presentation, and a robot obstacle course, where the team builds two robots and programs them to maneuver around the course.

The Super Garfields competed against 30 other teams at the state championships, winning the Robot Obstacle Course Award and Teamwork Presentation Award, Gendreau says.

“It’s a way that, at an intellectual level, kids can compete with their peers,” he says.

“Sponsorship comes from different places, like schools and churches,” Gendreau says. “Ours is a neighborhood team.”

Duchesne says Alliance, which employs about 169 people in Spokane and 31 in Europe, has been sponsoring the team for a while now.

“They always come in to present their results to us after the (competitions), which is fun for everyone,” he says.

The kids also tour the Alliance facility to see the robotic machines it uses, Duchesne says.

“The tie-in between what we do and the projects the kids do is another important element that makes this important to Alliance,” he says.

Duchesne says Alliance plans to stay involved as sponsor for the team.

The Super Garfields is made up of six students, ages 9 to 13, from Farwell Elementary School and one from Northwood Middle School. Lauren Champlin, the student from Northwood, says that building the robots is her favorite part of being on the team.

“Especially the programming part,” she says.

The other five students are Daniel and Drew Champlin, Ethan Ingalls, Garrett Jarvis, and Jake Gendreau, all from Farwell Elementary. Team members brainstormed the team’s name after befriending a stray cat that was in Jake Gendreau’s backyard that looked like the comic-book cat Garfield.

Drew Champlin says the best part of participating in the Super Garfields is being on a team.

“I get to hang out with my friends,” he says.

The theme for this year’s competitions is “Learning Unleashed,” Gendreau says.

“So the emphasis there is research and development on new and more efficient ways to learn,” he says.

The team started researching its project, “How To Get Students To Ask More Questions,” last March, he says, and started programming its robots in August.