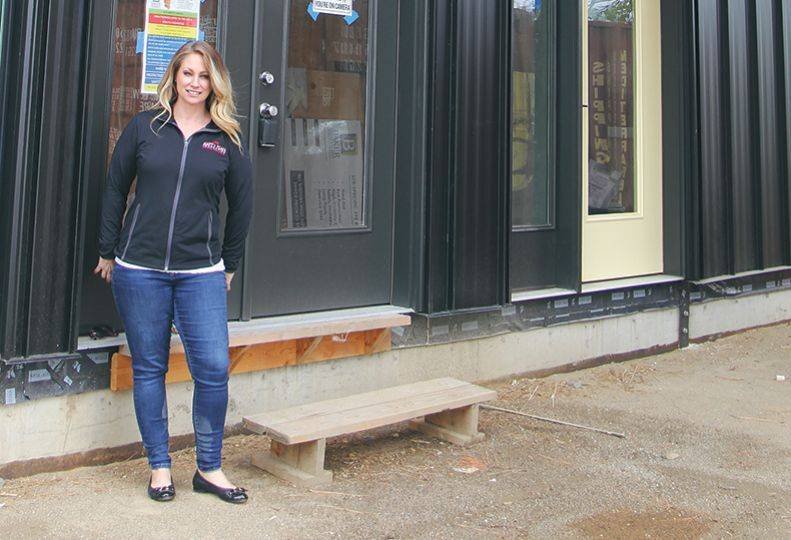 -—Karina Elias
Matt’s Place Foundation co-founder Teresa Whitlock-Wild says the new smart home on Spokane’s North Side is scheduled to be completed by the end of summer.

Matt’s Place Foundation Inc. anticipates opening its second smart home by the end of summer, on Spokane’s North Side, says Theresa Whitlock-Wild, co-founder and communications director for the Coeur d’Alene-based nonprofit, which was founded to lessen financial burdens of families with a member diagnosed with amyotrophic lateral sclerosis.

The Matt’s Place “smart homes,” the first of which was built in Coeur d’Alene in 2017, are specially designed for ALS patients and their families to live in free of charge for the duration of their disease.

An eco-friendly, state-of-the-art home located at 1116 E. Francis is near completion, says Whitlock-Wild. The 1,600-square-foot home has two stories and includes a master bedroom on the first floor and two additional bedrooms upstairs for family members.

Total project value is $500,000, confirms Spokane entrepreneur Andy Barrett, who joined the board of Matt’s Place in 2017.

Spokane-based Baker Construction & Development Inc. is the contractor on the project, and The Miller Hull Partnership LLP, of Seattle, designed it, building permit information on file with the city shows.

In addition, dozens of other organizations have donated time, labor, and materials to the project including Washington Trust Bank, and St. Luke’s Rehabilitation Institute. Catholic Charities Spokane donated 5,800 square feet of land on which the ALS smart home now stands, says Whitlock-Wild.

The home is constructed using cross-laminated timber panels, which were supplied by Colville-based Vaagen Timbers, she adds.

The smart home consists of 13 modules that are preconstructed, then assembled on-site, says Whitlock-Wild.

“This is a prototype. We’re trying to think of something where we can make a design, ship it, scalable, anywhere in the country,” says Whitlock-Wild. “We’re not there yet, but that’s the overall vision.”

To meet the needs of ALS patients, all doors, heating, and television in the home can be controlled through voice-command or eye-tracking technologies.

The master bedroom includes a wall-less bathroom and an airlift with which patients can be transferred from their bed to the bath.

A porch that will wrap around the home will be installed later this summer.

Each home accommodates one family at a time, says Whitlock-Wild. A family hasn’t been selected yet for the Spokane home, and the applications will be reviewed by a committee in which Whitlock-Wild isn’t involved. She says selection is based on a point system, and keeping families together is a priority.

The first family moved into the Coeur d’Alene smart home in 2017 and lived there for about three years. The second family has been residing there since winter 2020, she says.

Although the new smart home was erected along Francis Avenue, a busy arterial, the CLT panels are a natural insulator that keeps out noise, says Whitlock-Wild. In addition, minimal heating and cooling is needed. She says she’s still looking for someone who can partner with the project and donate and install solar panels on the second-floor deck.

Whitlock-Wild says his diagnosis turned their life together inside out as they learned through the ALS Association that, on average, ALS patients die within two to five years after diagnosis.

“And not just die, but lose the ability to move,” she says. “You slowly become paralyzed, but your brain, for most patients, remains intact.”

According to the ALS Association, numerous studies support the conclusion that people who have served in the military are at greater risk for ALS. Studies conducted by epidemiologists at Harvard’s School of Public Health reported evidence of nearly 60% greater risk of ALS in men with a history of military service in the last century.

In 2008, the U.S. Department of Veteran Affairs implemented regulations to establish “a presumption of service for ALS,” meaning that the VA assumes that a military service has led to or aggravated ALS in veterans diagnosed with the disease.

As a result, veterans diagnosed with ALS are eligible for “service connected” benefits that cover all expenses connected to the disease, including medicines, home renovations, powered wheelchairs, home-based aids, and other expenses, Whitlock-Wild says.

She adds that she and her husband were grateful to learn about the veterans’ benefits, but they also asked themselves, what about the other people?

A case study on the financial cost of ALS sponsored by the ALS Association found that “total disease-duration costs” were nearly $1.5 million per patient.

Whitlock-Wild says the VA has covered all of Wild’s expenses over the last seven years, which include remodeling their home, a nearly $100,000 wheel-chair accessible van, medications, and medical equipment.

The couple founded Matt’s Place Foundation in 2015, shortly after Wild was diagnosed, and came up with the concept of building smart homes for families to live in rent free for the duration of the disease.

Since being formed, Matt’s Place has raised $1.5 million, including both financial and in-kind donations. Using those donations, Matt’s Place has helped several families make improvements to their homes, rent, medical equipment, and other services.

The current residents of Matt’s Place in Coeur d’Alene are the Weyrauch family, of Newman Lake. Scott Weyrauch, a volunteer firefighter for 25 years, was diagnosed with ALS in November 2017.

In January 2020, Weyrauch, his wife Eileen, and their 33-year-old son Nic learned they had been selected to live in Matt’s Place and moved in the following month.

Eileen Weyrauch says she and her husband sold their home in Newman Lake when they learned they had been selected for Matt’s Place and applied for a secondary insurance to help keep up with Scott’s bills. Selling their home helped them remain above water financially, she says.

Their only source of income is a monthly disability check of $2,700, says Eileen. Beyond that, they depend on family, donations, and GoFundMe campaigns to make ends meet.

She estimates that the family spent about $100,000 in ALS-related care last year alone. She says she even cancelled her life insurance because she couldn’t afford the $80 monthly premium.

“Without Matt’s Place, we would probably be couch surfing in relatives’ homes,” she says.

In addition, because the ability to live rent-free saved the family money, she says it freed up resources for her husband to have a tracheostomy tube installed in July 2021 that now helps him breathe through an opening in his windpipe.

Had the Weyrauch’s not been living in Matt’s Place, he might not have opted for this life-prolonging measure, she says.

Scott’s mind is still active, and he still has many stories he wants to pass on to his children and grandchildren, Eileen says.

He has a Tobbi Dynobox Eye-Gaze screen calibrated to his eye movements, enabling him to write what he wants. Sometimes it takes him hours to write a three-minute story, but it’s worth it, Eileen says.

“I owe my husband’s life to Matt’s Place,” she says. “I could never pay it back, but I can pay it forward.”