An epic undertaking at MultiCare 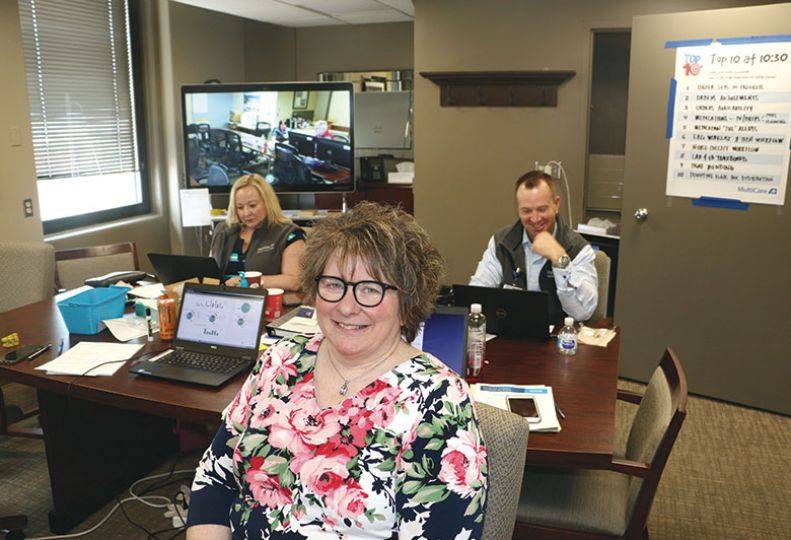 MultiCare, which acquired the assets of Rockwood Health System here from financially ailing for-profit Tennessee-based Community Health Systems Inc. a year ago, says it has spent more than $30 million on the conversion.

The health network brought in more than 50 experts of various types, from surgeons and infection-control specialists to Epic software-build analysts, and mapped about 600 Rockwood work flows as part of the complex undertaking.

“This has been a big job,” says Brenda Bowles, MultiCare’s director of clinical informatics and the conversion project leader, noting that work on the transition now has moved into more of a tech-support and system stabilization phase.

She adds, though, that the early-morning June 1 implementation, which she compared to a NASA rocket launch in terms of requiring lab, pharmacy, and other departments to report that they were “a go” to proceed, “went better than I thought it would.”

What’s most noteworthy about the conversion, aside from the sheer cost and scope of it, is that it means the Inland Northwest’s two largest health care provider networks—MultiCare and the also nonprofit Providence Health Care—now are using the same health record software system. That’s expected to translate into more seamless sharing of patient records, higher patient satisfaction, and greater patient and provider access to such records and other data.

“This is not just a MultiCare thing. It’s a community thing” in terms of the long-term benefits it will provide, predicts Kevin Maloney, Spokane-based spokesman for MultiCare’s Inland Northwest region.

Internally, Epic unifies health records for Rockwood’s hospitals and its clinics, which previously had been using different systems.

Dr. David O’Brien, MultiCare’s first chief executive for this region, says, “The goal of this implementation is ‘one patient, one record.’ We now have one place for our providers to go to get the full picture of the patient’s care, which is a major step forward in our goal of providing patient-centered care.”

Reflecting on the overall conversion project, O’Brien says, “Epic is a major undertaking—not just the technical computer software and equipment, which is huge, but the impact the new system has on our providers’ work flow and how they take care of patients.

“So it really is a major-change management effort and has required the effort of hundreds of our staff, from technical people to doctors, nurses, and ancillary staff. In fact, our new systems touch the work of essentially every person in the organization.”

MultiCare first announced plans to purchase Rockwood’s assets in the fall of 2016. Finalized on July 1 of last year, the $425 million acquisition integrated Rockwood’s facilities and its estimated 3,600 employees into MultiCare’s network.

In addition to its facilities here, MultiCare operates six hospitals in western Washington. Its network also includes primary-, specialty-, and urgent-care clinics and community outreach services, as well as the MultiCare Medical Associates physician group. MultiCare says on its website that it now has more than 18,000 “team members,” including employees, health care providers, and volunteers.

Bowles, the Epic conversion project leader, says initial work on the implementation began soon after MultiCare took over the Rockwood system. A 32-year MultiCare employee, she says she was asked to co-lead the project in October and took over full leadership of it in March. Though she’s based at MultiCare Tacoma General Hospital, she has been traveling to Spokane regularly for months and spending long hours here.

“The first thing was we found subject-matter experts from across the system and matched them with the clinical informatics team in Tacoma,” as part of the work flow-mapping effort, she says.

In comparing Rockwood’s hundreds of work flows with MultiCare’s somewhat smaller number, she says, “We had a huge spreadsheet. We called it our gap analysis. Then we took the gap analysis and compared it line by line,” relying on Epic build analysts and other experts to help arrive at appropriate, complementary standards that assured the highest level of care.

“That ran, in some cases, very close to the ‘go live’ date,” Bowles says. She adds that just in the week after that date, command centers established here had recorded more than 26,000 hours of support, with a quick turn-around time in responding to queries.

Bowles says the conversion turned out to be a larger undertaking than originally estimated in some respects, but adds, “Did we anticipate those challenges? Absolutely.”

Despite the substantial costs of the Epic conversion, she says, MultiCare expects to recoup those financial outlays through increased operating efficiencies, including in areas such as paper record-storage costs.

The Epic system is designed, through a web portal named MyChart, to give patients convenient online access to their health records as well as the ability to manage appointments, access test results, request prescription refills, monitor billings, and email nonemergency questions to their providers. From providers’ perspective, it’s expected to provide more cohesive patient tracking and enable quicker care decision making and monitoring, among other pluses.

Bowles and O’Brien note that although MultiCare’s Epic conversion here has gone well, achieving its fullest-possible implementation will be an ongoing process.

O’Brien says, “A change of this magnitude involves so much more than the ‘go live.’ Stabilization will take several months and be followed by an ongoing optimization effort. Epic is a very flexible and robust program and it takes time to learn all that the system offers.”

Providence originally intended to have the system up and running a year earlier. However, the launch was delayed by glitches that surfaced as the network began rolling out the system in outlying areas, prompting it to take a six-month pause so it could iron out those problems.

Epic Systems Corp., based in Wisconsin, developed the system that MultiCare and Providence now use here, and it claims on its website that more than 200 million patients have a current electronic record in Epic. Health care executives here describe it as a dynamic company that is regularly updating its software.

It announced last September an update to its MyChart patient portal, called Share Everywhere, that it says enables patients to authorize any provider with Internet access to view their health records. Using Share Everywhere, it says, patients can use their smartphones to send a view of their Epic chart to any clinician in the world.