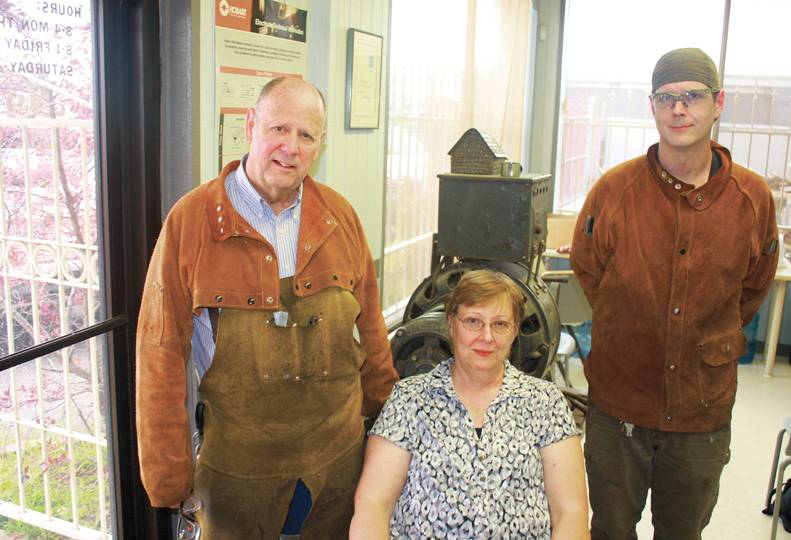 If the welding industry ever fielded an all-star team, Lonnie Benn, co-owner of Anvil Welding Instruction, of Spokane, might earn a roster spot as an accomplished utility player.

Benn, a draftee during the Vietnam War, spent time in Thailand as a welder for the Air Force. After the military, he worked at Welding Apparatus Repair Inc., near Felts Field, in Spokane Valley, a shop his dad Waldo had established. Later, Benn found work as a traveling factory rep for a welding equipment manufacturer.

Benn was employed in yet another capacity – as a welding inspector in South Dakota – when he had an epiphany. He would teach the trade he had known most of his life.

“I realized it’s not about me; it’s about getting people into welding,” Benn says. “I just had this faith to go and start a welding school.”

The transition would involve reviving the business in 2013 with a focus on teaching a trade.

It wasn’t the first change in direction for the family-run business.

Welding Apparatus Repair changed focus and was renamed Anvil Welding Supply in 1978, when Benn and his two siblings, Becky and Randy, bought their father’s business. The rebranded company specialized in equipment and supplies, mostly keeping up with the demand for liquid gas. The venture fared well with industrial connections such as Kaiser Aluminum Corp., Pacific Northwest Bell, and Boeing Co. But by the mid-1990s, national companies had taken over much of the liquid gas market. In 1995, Anvil sold out to Air Liquide and Benn began to travel the country as a welding inspector.

“We had a good run but decided we were just treading water,” he says.

Anvil Welding Supply had been located on East Trent Avenue in a former John Deere retail site built in 1953. When Benn and his wife Brenda decided to start their own welding school seven years ago, the location was the easy part. The family still owned the building.

Faced with the challenge of starting a new business, the couple reached out to Spokane Neighborhood Action Partners, the local nonprofit that features programs that support small business owners and aspiring entrepreneurs with loans and counseling. A $5,000 loan from SNAP went toward two welding machines, while the Benns soaked up advice on the logistics of entrepreneurship. On Feb. 1, 2014, Anvil Welding Instruction opened its doors.

It didn’t take long before the idea of a mom-and-pop welding school caught on. Although they originally appealed to welding hobbyists, the Benns shifted quickly and became a state-licensed vocational school.

Brenda Benn recalls, “As soon as we started offering career classes, we had a waiting list.”

While declining to disclose annual revenue, she says it doubled in the company’s second year and doubled again in the third.

The last figures from the state in 2015 show the company placing 70% of its graduates in living-wage jobs, though she says that number “has got to be higher now.”

“Companies are crying out for welders,” she says. “We get calls consistently from employers looking for help. Some even stop by the shop.”

Joe Vogrig, a welding inspector with Northwest Steel Fabrication Inc., in Deer Park, says Anvil has been a reliable source for qualified welders over the years.

“To find good employees can be tough,” Vogrig says. “We’ve had good luck hiring from Anvil. Lonnie does a nice job getting them prepared. They have a good knowledge base when they get here.”

There is currently a two-month waiting list at Anvil. Despite being closed for nearly two months due to COVID-19 state restrictions, revenue is running 10% higher than 2019 revenue.

Lonnie Benn says, “All of the trade schools are busy right now.”

The course list at Anvil includes training on structural steel, pipe, and tungsten inert gas arc welding known as TIG. The five-week structural steel class runs $2,700, while the 10-week program is $5,000. Eight weeks of pipe welding instruction is $5,000, while tuition for TIG is $1,400 for two weeks or $2,800 for four weeks.

Anvil offers a kit for $300 with all that aspiring welders might need on the job, including gloves, hand tools, a heavy-duty jacket, a leather apron, a tape measure, a hammer, and a helmet complete with auto-darkening hood.

Lonnie Benn says he patterned the school after his experience at Spokane Community College over 50 years ago.

“It was Greene Street Trade School back then,” he says. “We just welded every day. It worked for me. We train people here to be career welders, to weld to a code. We’re teaching the way I learned.”

He is known for serving up generous helpings of positive reinforcement to students, many of whom have never welded before. Lonnie and Brenda’s son, Adam, also works as an instructor, and the company has one other employee.

“You’re helping people who just need a little bit of hope,” Lonnie Benn says. “By just showing them and giving them encouragement, it helps. It’s a good atmosphere. I just try to be a good coach.”

The average class size is 17. The 2,400-square-foot building features a spartan classroom with the work floor outfitted with 17 welding machines.

Brenda Benn says Anvil has enrolled students from all walks of life.

“Almost everyone we see is in transition of some sort,” she says. “We’ve had people in their 40s and 50s from fields like accounting and purchasing who want to work with their hands instead of sitting at a desk.”

Steady referrals come from places like WorkSource Spokane, Next Generation Zone, and Career Path Services. The Post-9/11 GI Bill also has provided a boost to veterans aspiring to learn the trade. Anvil grads sometimes drop by the school after establishing careers and share stories about work and accomplishments.

“That’s the best part of the school,” says Brenda Benn. “When they come back and say, ‘I got this job, and I helped build this or produce this product.’”