Complex to include up to 450 living units 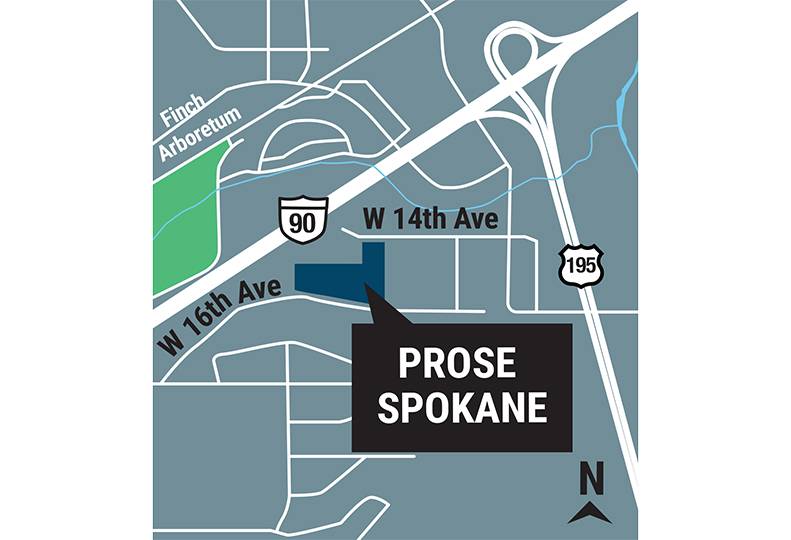 Anderson, who works in the company’s Seattle office, says the development, named Prose Spokane, will be the first project in the Spokane area for the company.

He says Alliance Residential primarily focuses on building market-rate housing projects and senior housing projects in the Western Washington state cities of Seattle, Bellevue, and Vancouver, and in Portland, Oregon.

“In the last three and four years, we’ve been looking for projects to bring us east to Spokane and to Boise. We’re largely market-driven, and we track tenant demand, and the Spokane market has shown a need for more housing,” says Anderson.

The development site is located on seven lots south of Interstate 90, west of Milton Street and north of 16th Avenue, less than a half-mile east of the John A. Finch Arboretum. An address for the complex hasn’t been assigned yet.

Prose Spokane will have market-rate rental units consisting of studios and 1-bedroom and 2-bedroom units throughout a number of buildings, which still is to be determined, he says.

Construction costs haven’t been finalized yet for the project, Anderson adds. Recent multifamily projects such as the 160-unit complex proposed on the Iron Bridge Office Campus in Spokane’s University District, have project values upward of $150,000 per unit, which could put the construction value for Prose Spokane at well over $60 million.

Environmental documents show that construction is expected to begin in late summer or early fall next year and will take about 22 months to complete.

A contractor hasn’t been selected yet, says Anderson.