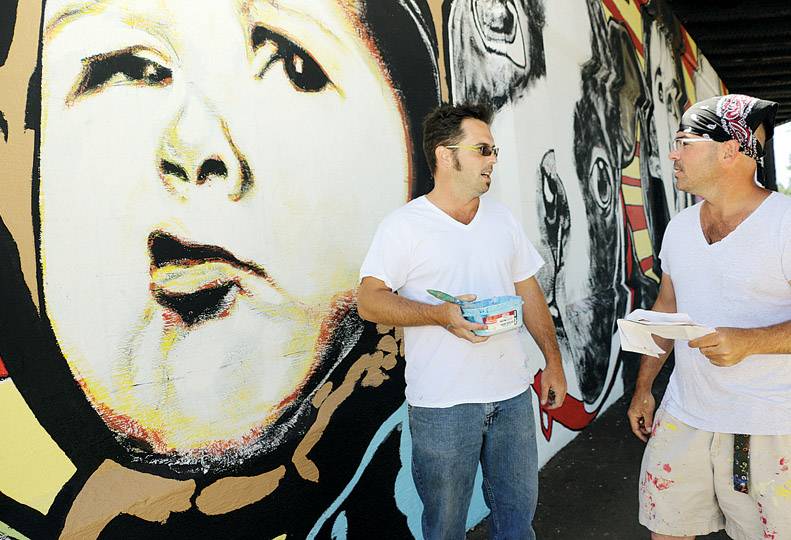 -—Judith Spitzer
Brothers Cain and Todd Benson are painting murals under the railroad viaduct near the intersection of Second Avenue and Maple Street as part of a larger Spokane Arts Fund project. 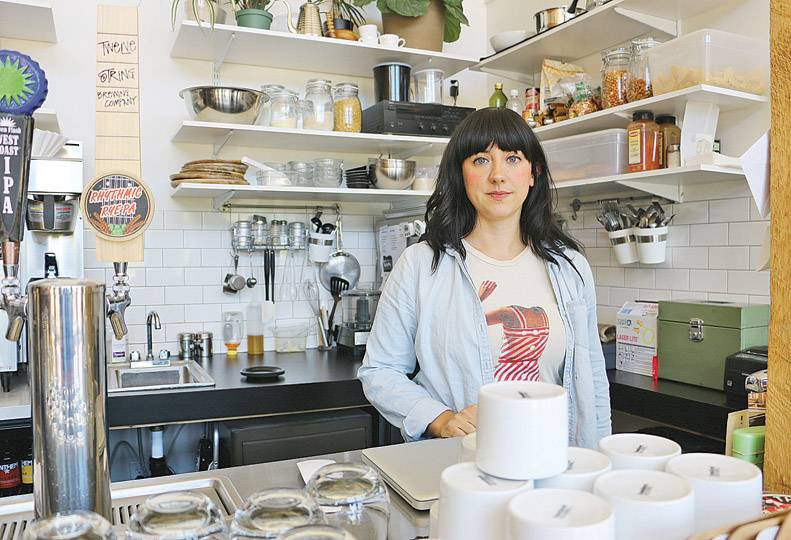 -—Judith Spitzer
The Bartlett co-owner Karli Ingersoll says the all-ages music venue has surpassed some of her expectations since it opened along west Sprague Avenue downtown last December. 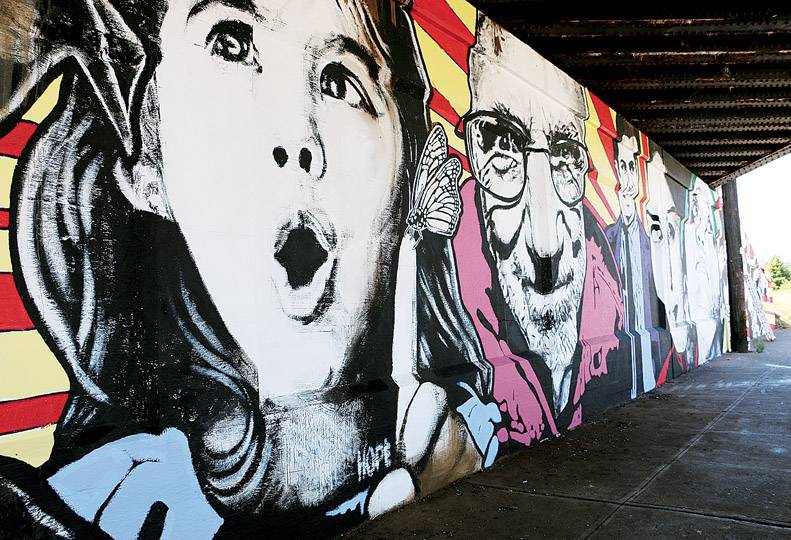 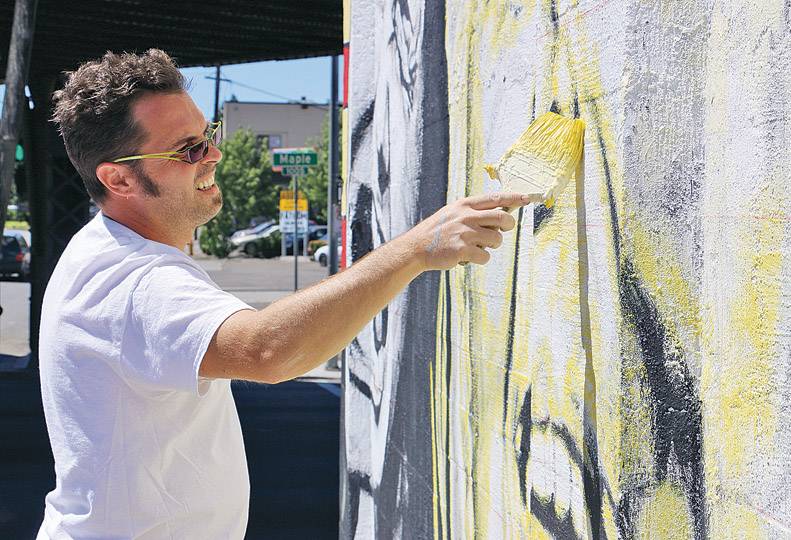 When it comes to the arts and culture in Spokane, arts organizers say there’s a large population working in the creative sector, but audience participation in the region is low, well below the national average in most categories.

The Spokane Creative Vitality Index shows that the Spokane area now has about 7,000 creative jobs here, which includes everything from designers, writers, artists, and animators to architects, photographers, and filmmakers.

The index, was created by Spokane Arts in partnership with Greater Spokane Incorporated, the city of Spokane, and Eastern Washington University with funding from ArtsWA, the Washington State Art Commission. It’s based on a national rating system developed by several regional arts organizations including the Western States Arts Federation based in Denver. The local index takes into account employment in creative fields and participation in the arts.

Employment numbers aren’t bad, Halberstadt says, for a city of Spokane’s size and location. When arts-related revenue, performing arts attendance, concert ticket sales, books and record store numbers are added to the mix of employment, however, the results are less than impressive.

Spokane County’s most recent cultural vitality score was 0.78. While that was up from 0.74 in 2010, it lags compared with a statewide average of 1.029. Spokane County is 22 percent below the national Creative Vitality Index average of 1.00, according to the index.

“The CVI is a national study that measures creativity,” Halberstadt says. “Arts occupations are one of the region’s strongest areas. What’s not such great news is the lack of awareness and appreciation of the arts.”

To ramp up participation, Halberstadt and other art leaders are talking about establishing a corporate council for the arts here. She says the index shows what is working here in the arts and what isn’t. She believes the numbers indicate the arts have a bright future in Spokane.

Halberstadt says growing the existing creative community in Spokane would be a real asset for the region.

“Economists say a thriving creative economy is a vital piece of the 21st century landscape, fostering innovation, attracting a skilled and creative workforce, promoting tourism, and improving livability,” she says. “We have a gem here.”

Halbertstadt says she would love to see the community as proud of its arts culture as it is of sports or transportation.

Still, she says there is an undercurrent in full swing in Spokane, made up of an emerging group of young creative types who are sparking interest with fresh and different music venues, new ideas for public art, and innovative arts organizations.

One of those innovative music venues, The Bartlett, has been open at 228 W. Sprague since December. Owned and managed by Caleb and Karli Ingersoll, two local musicians who are part of the band Cathedral Pearls, the idea for The Bartlett was born after The Empyrean coffee house and music venue closed in 2011. The two raised more than $21,000 on the crowdfunding website Indiegogo.com in 30 days after two years of devising a plan and refining their vision.

The 2,500-square-foot space across from the street from the Spokane Intermodal Center on Sprague has a small bar in the front, where beer, wine, and small plates of appetizers are served. The concert area in back seats about 90, but the facility holds about 150 with standing room only. It’s an all-ages venue and bands represent a mix of music from hip-hop and country to punk and bluegrass. The Bartlett is becoming known for hosting up and coming bands such as Dead Serious Lovers and Water Monster, two local bands, as well as national artists such as Robert DeLong and Seattle’s Pickwick.

Karli Ingersoll says business is great, although she didn’t want to disclose revenue. “We’re paying our bills, and that’s a good thing. And we’ve surpassed some of our expectations for the first year in business so that’s pretty exciting,” Ingersoll says.

So far, The Bartlett has hosted 90 concerts, and 20 of them have sold out, she says.

Ingersoll, who has run her own graphic design business in Spokane for more than three years, works with small businesses full time as well as creating album art for musicians. She says she has seen “tons of growth” in the arts just since the Ingersolls opened The Bartlett.

“A lot of artists are active in pursuing a future, and they seem to be a lot bolder,” she says. “The music has grown a lot in the last couple of years.”

Ingersoll, who is from Spokane, has seen the city move forward and experience peaks when things are going really well and then “something discouraging happens like a venue closes,” she says. “Then things take a downturn, and people get discouraged. This (upswing) is an opportunity for people to push through and use critical mass … we need to move forward and not get discouraged.”

That pattern of discouragement has been going on for years, says Luke Baumgarten, co-founder of Terrain, a nonprofit arts organization. Baumgarten, who covered the arts scene for the Pacific Northwest Inlander for several years and now works full time as a creative strategist for Spokane-based digital ad agency Seven2, says none of the 30 or so friends he went to Gonzaga with stayed in the Spokane area after graduation to start careers.

“That brain drain is a big problem,” Baumgarten says. “Kids go to school here but most don’t leave their campus and they don’t think there’s anything going on. If a (city) is a cool place to be, kids tend to stay and put down roots.”

Baumgarten is troubled especially by the low turnout here for the visual arts. He says stronger public participation in that area could positively affect overall creative vitality.

He points to Portland and Seattle as examples of how cities can encourage arts participation. “We need to build those community centers, visible neighborhoods … we need to create gathering places around the arts,” he says.

Baumgarten and several friends founded Terrain to coax and nurture the emerging arts scene and help young artists connect with the arts establishment six years ago. Every year on the first Friday in October, Terrain hosts a one-night-only conglomeration of artists, musicians, writers, and filmmakers displaying and celebrating their work.

This year, Terrain also hosted an outdoor arts festival called Bazaar in late June at the corner of Wall Street and Main Avenue in downtown Spokane. Fifty local artists were invited to sell their works with the condition that they offer up half of their work for under $100.

The goal? To sell art and cultivate new art patrons.

They were successful on both fronts, Baumgarten says.

Baumgarten points to other examples of a burgeoning arts scene here, including the billboard painting of Nelson Mandela near Main and Bernard. In mid-July, a local artist and design professor from Whitworth University, Jessie Pierpoint, depicted his interpretation of “legacy” for Global Credit Union, with a 23- by 11-foot advertisement during a one-day live painting.

Nurturing creativity, Baumgarten says, can be done by the community, with help from the city, to beautify things like the entrances to the city which are blighted by empty lots. “And they don’t have to be permanent. They can be things like pop-up galleries. It doesn’t always need to be long term to get people excited and talking about it,” he says.

A number of visual arts projects are being created this summer in the greater Spokane area, says Halberstadt. The walls under the railroad underpasses at Wall, Howard, Maple and Browne are being painted by several groups of artists. The Spokane Arts Fund commissioned the project over the spring, and the murals will be complete by the end of the summer. The mural projects were awarded in May, and each will receive a stipend for his or her work as well as painting costs. She says all the new murals aim to foster a sense of community ownership and interactivity.

At the Maple Street underpass, at Maple and Second Avenue, Todd Benson and his brother Cain are putting the finishing touches on a mural that Todd Benson calls a cross-section of humanity. The two have been painting the real-life characters, people displaying a wide array of emotions taken from photos and online stock photos, since late June.

Todd Benson says in the process of creating the mural they felt a strong desire to speak in a contemporary language. “The mural was created by absorbing the zeitgeist of the world we live in and using visual imagery to communicate our feelings about it,” Bensons says.

The Bensons, originally from Canada, have been here for 25 years. They recently created a 77-foot mural at Greenstone Homes’ Central Food building in Kendall Yards called “A Love Letter to Spokane.”

The Maple Street mural speaks to not only diversity, race, and sex, Todd Benson says, but also the emotion those topics bring up. Benson says the images were chosen very carefully to make the work flow and they believe the faces fit together like puzzle pieces.

The two brothers say people stop constantly to talk with them all day while they’re painting, which is something they love about the project. It gives them immediate feedback and a chance to interact with people and their opinions.

“Art comes from our interaction. Our art is purely autobiographical. It is about ourselves and the world we live in. It is an attempt at a record,” Benson says.

Halberstadt says various organizations are helping to increase participation in the arts here, including Spokane Arts, which hosts Create Spokane, a month-long celebration in October of local arts and culture across creative industries and arts disciplines. Spokane Arts also recognizes the accomplishments of artists through its annual Spokane Arts Awards and provides workshops, lectures, exhibitions and classes, many of which are low cost or free.

Halberstadt says other organizations that promote and support the arts include Broken Mic, an all-ages poetry open mic every Wednesday at Neato Burrito at 827 W. First; RiverLit, a quarterly literary magazine published in Spokane; INK Art Space, which provides tutoring and mentoring for the area’s young writers and artists; and the Saranac Art Project, an artist-owned cooperative that exhibits cutting-edge artistic talent located at 25 W. Main.