As listing continue to decline, Spokane Realtors must compete

Number of agents rises, though growth is slowing 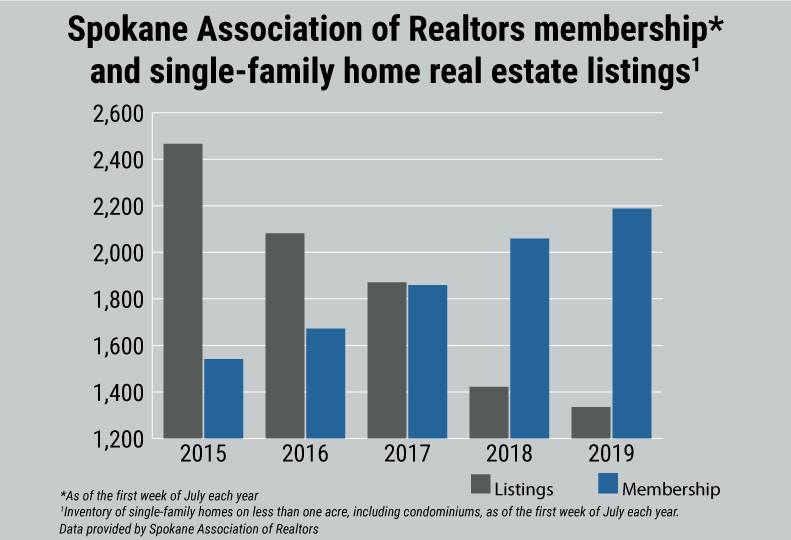 A hot residential real estate market has led to an increase in the number of Realtors in the Spokane area, while homes on the market has decreased simultaneously.

Some local experts and agents say the surge in competition has made doing business more challenging for both new and experienced agents.

Rob Higgins, executive officer of the Spokane Association of Realtors, says membership in the organization has increased by about 6% in the 12 months since last July.

“For fiscal year 2019, we anticipate the increase to be closer to 3%,” Higgins says. “I think we’re pretty close to that right now.”

At its peak, around 2007, Higgins says membership increased by 9%.

“This is the slowest percentage increase in the last five years,” Higgins says.

As the number of Realtors has increased, the inventory of single-family homes for sale through the association’s Multiple Listing Service has decreased by nearly 46% since 2015, including a 6.1% drop during the past 12 months.

As of July 9, the association had 2,188 members in the organization — that’s more agents than listings, of which there are 1,335.

Melissa Murphy, owner and designated broker at Murphy Group LLC, which does business as Prime Real Estate Group, says the Spokane area continues to appeal to those looking to relocate due to the area’s comparatively low cost of living and an increase in available jobs here.

“Inventory keeps dropping,” Murphy says. “Last June, we saw signs that it might be adjusting, but that was very short lived.”

Tom Clark, president-elect of the Spokane Association of Realtors and Realtor with Spokane-based Kestell Company Realtors, says a lack of inventory means Realtors often deal with clients frustrated by the lack of options, and Realtors find themselves struggling with increased competition for listings.

“It spreads the business out a little,” Clark says. “The more Realtors there are, the more challenging it is for some of them. By and large, most of them are doing just fine. Business is up, which is good, but the inventory is down, so those looking for listings are having their fair share of challenges.”

Despite the decrease in inventory, the Spokane-area residential market continues to draw new Realtors, Murphy says.

With home prices rising — the median closing price for homes sold last month was $265,000, up 44% compared with five years ago — real estate is an attractive industry to those hoping to find financial success.

“With the signs of the market seemingly good, you will find that real estate specifically has a lower barrier to entry,” Murphy says. “If it’s only $1,000 to get your real estate license, you will see a high turnover of people getting in who may not succeed. It’s always been that way; it just seems to be more prevalent when the market gets so hot.”

Murphy says that newer agents often lack the connections required to succeed in the industry, prompting them to seek leads from nontraditional sources.

“They’ll have to pay for leads through services like Zillow or Trulia that can be more costly, and if you haven’t established yourself yet as an agent, sometimes it’s hard to pay for things like that if you aren’t producing already,” Murphy says.

Meanwhile, other forms of technology are streamlining some processes for agents, Murphy says.

“Technology has allowed agents to be more efficient and effective, with things like DocuSign, where you can do electronic signatures,” Murphy says.

Even with an increase in competition, Clark says the market — and the number of Realtors — is unlikely to change anytime soon.

“I anticipate the market we’re currently in will continue for at least the foreseeable future — foreseeable being the next year, possibly year and a half,” Clark says. “And then who knows whether it will get better or worse. Change is inevitable; it’s just a matter of when.”