With capital budget for IT at $23 million, utility has host of projects under way 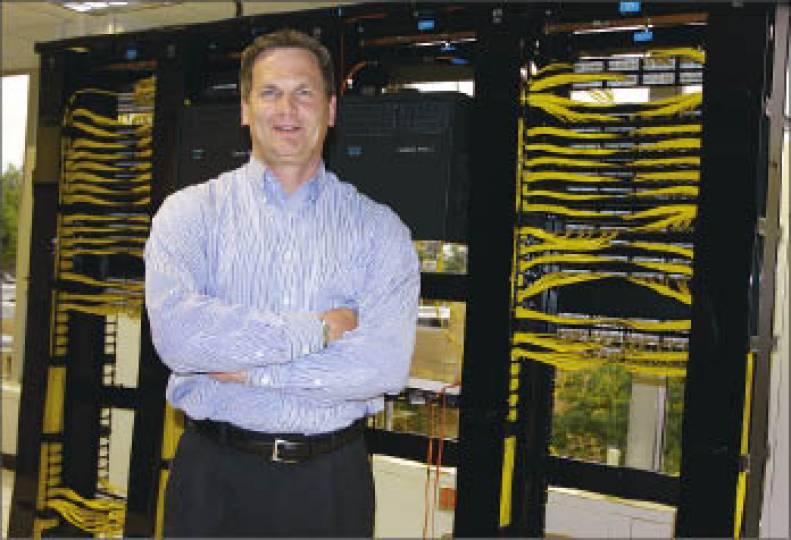 -—Staff photo by Paul Read
James Kensok, Avista's chief information officer, says new racks of switches such as these allow the company to boost its bandwidth for data transmission.

If you think your capital spending budget for technology has become unwieldy, wrap your brain around this number—$23 million. That's what Avista Corp. plans to spend this year on information systems, technology, and cybersecurity.

In projects ranging from the replacement of mountaintop communications towers, to accounting system upgrades, to disaster recovery preparations, Avista is aggressively upgrading and expanding the technology behind its sprawling operation, says James Kensok, chief information officer at the Spokane-based company. The push, which includes a spending plan this year that's 60 percent higher than normal, is due partly to external pressures such as regulatory and compliance rules, and partly to company initiatives to cut operating costs and improve reliability and customer service, Kensok says.

"Technology is moving at speeds the utility industry isn't used to," he says.

To illustrate how important technology has become to the utility industry, Kensok says that for the first time in company history, he was called last year to a rate case hearing with Washington state regulators to explain planned technology upgrades. Also, he says, he now reports directly, on some matters, to the risk committee of Avista's board of directors.

"Risk has shifted from humans to computers," he says.

Avista's focus on technology goes beyond the normal upgrades businesses its size must make to stay current and competitive, and includes such concerns as securing power generation and transmission systems against hackers, and preparing for the huge amounts of customer data that will be collected when so-called "smart-grid" technologies take hold. As a regulated utility, Avista is audited heavily on everything from how reliable its systems are to how well it protects customer information.

In the past, Kensok says, Avista would have a host of separate computer systems, each dedicated to serving a specific business operation. Today, there is growing demand to link all those systems together as an enterprise, so data collected in one can be used in decision making by people managing others, he says. Meanwhile, the advent of the smart grid is creating two-way data communications between customers and Avista, and between Avista and other energy providers, which creates greater need for data firewalls and other security technologies, Kensok says.

"Because we are automating the systems, there's more of a reliance on technology," he says.

Although Avista does disclose its overall capital budget for technology, it isn't willing to provide a breakdown of specific project costs within each year, since many of the projects are multiyear and some will include vendor contracts that haven't yet been negotiated, Kensok says.

He will say, however, that this year, the single biggest piece of Avista's capital budget for technology is a complete upgrade of the broadcast system Avista uses to communicate with remote facilities and field workers throughout the four states in which it does business.

That project, which is expected to cost $18 million to $22 million over four years, was triggered by new Federal Communications Commission rules that dramatically narrow the bandwidth frequencies that many broadcasters, including public safety agencies and utilities, use to communicate in the field. Avista uses about 30 mountaintop towers, each equipped with radio antennas to communicate with field employees and microwave transmitters to relay communications among the towers and with Avista's many facilities.

The FCC is requiring organizations such as Avista that have used a 25 kilohertz bandwidth to convert to a narrower 12.5 kHz bandwidth by January 2013, and later to an even narrower 6.25 kHz frequency. That, says Kensok, means buying a lot of new equipment—from radios and antennas to microwave gear—and for many utilities, adding towers so they're closer together and leasing new frequencies owners of bandwidth spectrum. In some cases, he says, a utility would have to do those things twice to meet each of the two FCC bandwidth changes.

What Avista has decided to do is to buy bandwidth frequencies, rather than lease them, as it has in the past, so that it won't be subject to the FCC narrowing rules. It still will need to buy all new equipment, but will have to do that only once, rather than each time the frequency rules change, he says.

Another big technology project that is being required by regulators has been the establishment of redundant data centers and control centers, so that when technology fails, Avista's ability to provide power continues without a hitch, he says.

In December, Avista made operational a complete replication of its Spokane system operations center at an undisclosed location. That center is used to manage Avista's entire electrical infrastructure. The new, redundant center can launch into action if anything happens to its main center in Spokane, but it can't just sit there until such a crisis occurs, says Kensok. By federal rule, Avista must operate the center one full day every two weeks to ensure that it's ready to go if the need arises.

Kensok declines to disclose the cost of the new center, but says some additional costs are included in this year's capital budget to modify the center based on regulatory mandates. Some modifications include new reliability standards, and some are related to new security rules.

Separately, Avista also operates an unmanned redundant data center in San Jose, Calif., where a third of the data the company stores is replicated continuously, he says. Redundant centers are another technology tool that have changed in recent years, Kensok says, adding that in the past, companies were content with being able to restore computer systems and data within 48 hours of a crisis, while today the expectation is that's instant and automatic.

Another outside force affecting change in technology is a requirement that larger publicly traded companies revamp their accounting systems to meet international accounting standards, rather than the Generally Accepted Accounting Procedures, or GAAP standards. That change requires Avista to upgrade its computerized accounting systems, which in turn affects the myriad databases the company maintains, Kensok says. That upgrade effort began in January and will continue through mid-2011, he says.

In addition to projects triggered by regulations Avista must meet, the big energy company also is working to upgrade its systems to provide efficiencies and reliability, Kensok says.

Among the upgrades are changes to its customer management systems, which include the direct interfaces Avista has with its customers via automated telephone mechanisms, its Web site, and the more traditional human connection at a call center. Much of the software that overall system uses is nearly 20 years old and needs upgrades, Kensok says. Replacing it entirely could cost $50 million or more, so Avista has chosen to modernize some parts of the backbone systems, but pull off into smaller, less expensive servers other parts of the overall system. By doing so, he says, Avista should be able to complete the project for $6 million to $8 million. A separate, tiny project will give customers who use smart phones such as Blackberry devices and iPhones the ability to report outages using their phones, and later to pay a bill or to open or close a service account with Avista.

Electronic interaction with customers can save the utility in labor costs. Currently, Avista would need to hire 20 additional employees to handle the customer interaction done via electronic means, Kensok says.

Similar upgrades are being made to the company's geographic information systems, or GIS, which provide maps that are layered with various components of Avista's power distribution network, and are used, in various forms, by everyone from planners and engineers to dispatch and field workers, and even customers.

For instance, customers can check for outages in real time by visiting an interactive map on Avista's Web site, which will show them the exact area of the outage, how many users are affected, and what the status of the repair is.

Kensok says such projects and others illustrate how Avista increasingly is integrating its various technological systems, since GIS maps are used by a host of disparate units within the company.

"We have to think enterprise, rather than pockets," he says.

Another example of that integration is the advent of smart-grid technologies, which for customers eventually will mean having electric and gas meters that are capable of tracking detailed usage information and transmitting that information to Avista, as well as Avista even being able to control the meter remotely. Kensok says that technology, though exciting, will impact a host of different departments at Avista, ranging from customer relations to load control management, and also will create new challenges for his teams, including in areas such as security and data storage.

Creating two-way communication between Avista's computer networks and devices within homes and businesses will create new security risks, as will more call for data sharing between utilities that adopt smart grid approaches, he says. Meanwhile, when you think of having an electric meter capturing usage data multiple times a day, and perhaps every 15 minutes, and then multiplying that by several hundred thousand customers, you're talking about a huge amount of data that must be transmitted, processed, and stored, Kensok says.

Currently, for instance, Avista stores roughly 112 terabytes of data (that's 112,000 gigabytes) of data at any given time, but the company expects, with smart grid and other changes, to need to handle at least a petabyte of data (1,000 terabytes).

"The data needs grow exponentially," he says, adding that one of the big tasks Avista must take on is analyzing what usage data it should store long term and what it can delete either immediately or over time.

Kensok says that what's interesting about the greater technology-related spending, and all of the new capabilities that spending has brought, Avista's operating budget for technology is identical to what it was eight years ago.

"Being able to add this much automation and still be at the 2002 level in terms of operating expenses is pretty amazing," he says.