Manufacturer recognized for being eco-friendly 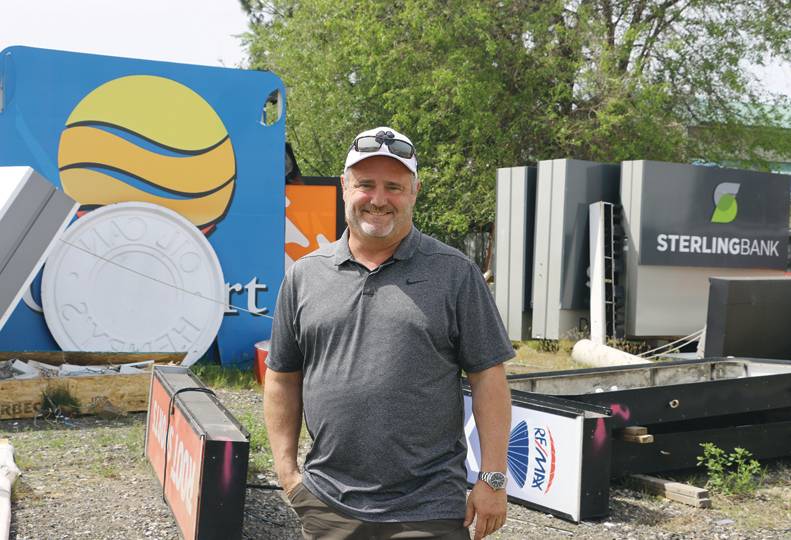 -—Virginia Thomas
Baldwin Sign Co. owner Jon Whipple says the company is nearly 80 years old and has tripled its size since 2003. About 30 people work there now. 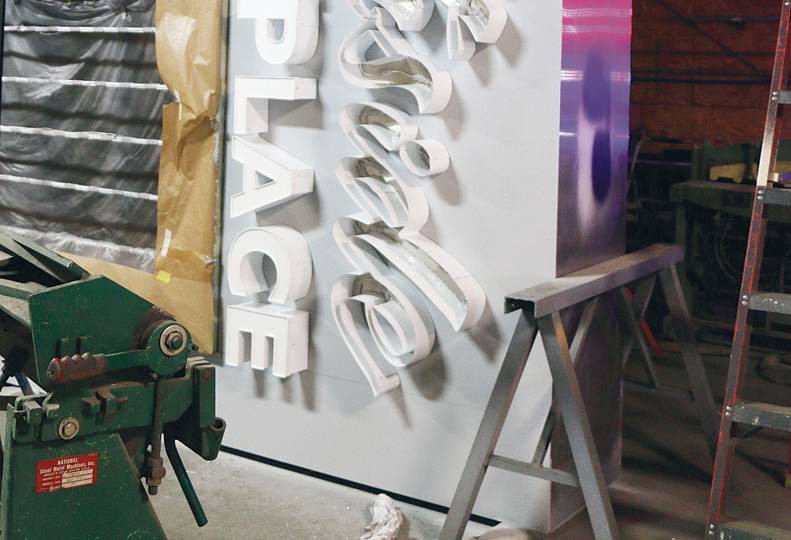 -—Virginia Thomas
An unfinished sign for the Northside Marketplace, a collection of tenants in the former Costco building, stands in the Baldwin Sign Co. shop.

Baldwin Sign Co. has seen a lot in the nearly 80 years since it was established here, and owner Jon Whipple says the company’s flexibility, adoption of new technology, and commitment to quality have kept its doors open.

Now, Whipple says he’s eyeing ways in which Baldwin Sign, which designs, fabricates, and installs signs, could expand into other markets while retaining a strong presence here.

“My goal is to reach out to our regionally-based businesses and become their go-to people within branding,” Whipple says. “I’d like to bring business into Spokane, not just do Spokane business. It’s a pretty limited market.”

Spokanites sometimes underestimate what companies here can do, he says.

“We tend to have a provincial state of mind,” Whipple says. “You might think you need to get someone out of Portland or Seattle or Boise to do a project. But we’re right here in your backyard. You know who Seattle and Portland and Boise people hire to do the work you’re going to assign to them? It’s us.”

Whipple already has begun to make progress toward his goal. He says Baldwin Sign is creating signs for a project in Dallas and has completed some work for projects in Utah and Arizona.

He says the Spokane market has changed over the years as companies similar to Baldwin Signs have closed or relocated.

When the Whipples bought the company, Baldwin Sign had four employees; now it has 30. Except for the 2008 recession, Whipple says, the company has grown by double digits every year since he and Nicol took the reins. While Whipple declines to disclose more precise figures, he says Baldwin Sign’s annual revenue is between $5 and $7 million.

“We pretty well tripled our size” at the time, Whipple says. He says the increase in space allowed Baldwin Sign to take on larger projects.

Baldwin Sign’s handiwork can be seen throughout Spokane and the Inland Northwest, including the signage at the Spokane Tribe Casino, in Airway Heights; all Gonzaga University signage; the Centennial Hotel; and the signs for My Fresh Basket grocery store in Kendall Yards.

In 2017, Baldwin Sign handled the replacement of the sign on the Wells Fargo Center, downtown — an undertaking that required a helicopter to help remove the old lettering and install the new versions.

The task required the closure of several downtown streets to assure safety of vehicles and pedestrians while the helicopter flew letters back and forth from a staging area nearby. Baldwin Sign employees were stationed throughout the area to keep as many eyes as possible locked on the project.

Baldwin Sign is also responsible for many older, iconic signs throughout Spokane. The company built the original marquee for the Garland Theater in 1945, and more recently restored and converted the marquee to LED lighting.

The recent switch from neon to LED is shaking up the industry, but Whipple says the company has stayed on top of that technology.

About seven years ago, Whipple and a business partner founded Steelhead LED Technologies Inc., which makes an array of LED lighting and power supply products. Although the companies are distinct entities, Baldwin Signs uses exclusively Steelhead LED products, which are manufactured by companies “all over,” Whipple says, including some parts in China. Whipple says because the company contracts out its manufacturing, the current trade tensions between the U.S. and China will have no effect on Steelhead LED.

“When the market shifts, we take those manufacturing contracts to different markets,” he says. “We already pivoted and upgraded. We’ve got a new line that we specified coming out of South Korea in a few weeks.”

In addition to remaining up to date with the latest in sign and lighting technology, Whipple says Baldwin Sign always is concerned with being environmentally friendly. The company received a five-star EnviroCertified business rating in January for its work to reduce hazardous waste and prevent pollution of the Spokane River and the Spokane Valley Rathdrum Prairie Aquifer. The EnviroCertified program is sponsored by several local organizations, including The Spokane River Forum, the Spokane Regional Health District, and The Spokane Aquifer Joint Board.

The company recycles as much as possible, Whipple says, from scrap metal to entire trucks. Baldwin Sign also tries to reduce the environmental impact of the materials it uses in creating signs, he says.

For example, Baldwin Sign uses water-based acrylic latex and water-based urethane paints that contain few to no carcinogenic volatile organic compounds, or VOCs. Whipple says these paints are durable and less toxic than other paints used in sign-making.

Project manager Heath Wineinger says, “I came from a shop with the old-school method, and it’s a night-and-day difference. The lack of waste, the fumes, the chemicals … it’s a much better product, environmentally.”

The paints contain additives which help paint to dry quickly when dropped. From six feet or higher, a drop of the paint becomes solid and can be swept away.

“If it were to hit your car, 90% of the time you can come down, throw water on it, and wipe it off,” Whipple says.

Baldwin Sign aims for quality in its employees as well as its environmental practices, he says.

While Baldwin Sign is always looking for new talent, Whipple says that the skilled nature of the work means that most young people fresh out of high school aren’t yet qualified to work there.

“A young person walking in the door has to have some level of skill to be of any use at all,” Whipple says. “They need a couple of years of seasoning. They need to understand what their strengths are.”

The heavy fabrication side of the business is especially rigorous in terms of the needed skills, he says.

“There’s a significantly high skill set within the fabrication group,” Whipple says. “For somebody to just walk in the door green, it’s going to be overwhelming.”

There’s some turnover, but Whipple says most employees stay with the company for years. Some fabrication employees at Baldwin Sign have been working in the trade for decades.

“We’ve got guys who were tin-bangers from the time they were kids,” Whipple says.