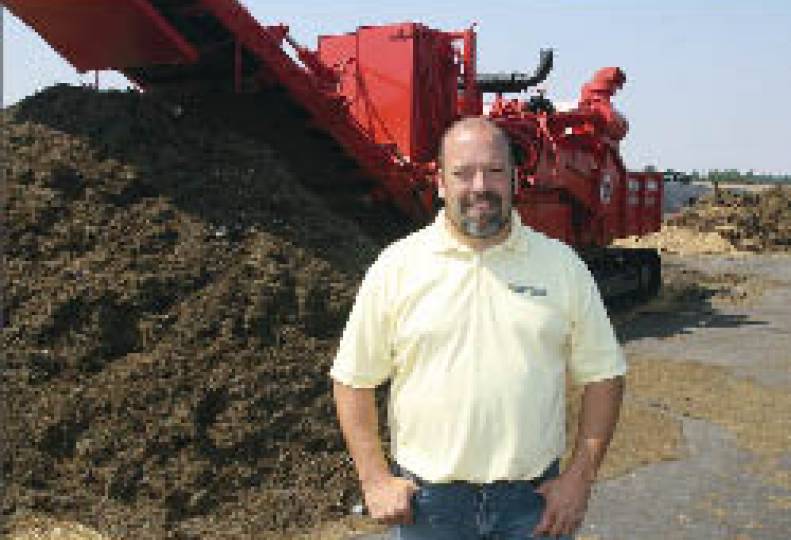 Barr-Tech LLC, of Spokane, has invested $9 million to develop and open the composting portion of a planned $14 million organic-processing facility located 22 miles southwest of Spokane, and says it's poised to begin work on the power-producing second phase of the project.

That part of the project, it believes, will turn the facility into a national demonstration model for zero-waste processing and green power production. Until a couple of weeks ago, though, it was putting that phase of the project on hold while it sought to secure what it deemed adequate streams of waste to warrant the capital expenditure.

It faced the dilemma of possibly losing some of the funding it has garnered for that part of the project if it didn't complete the work by the end of next year. Factoring in roughly nine months for construction, it said it was looking at a narrow time window in which to persuade a number of large Inland Northwest generators of organic waste to use its services.

That time crunch now appears to be moot.

Larry Condon, general manager of the Barr-Tech facility, located on 40 acres of land just north of Interstate 90 in rural Lincoln County, said late last week that the company just in recent days has lined up an organic waste supply sufficiently large to move ahead with the $5 million second phase of its project.

"We are going to build. We're getting call after call of additional 'feedstocks' that we weren't even aware of," Condon says. "Are we going to get enough? Yes we are. We are looking at starting (that next phase of construction) in October."

His brother, Ted Condon, of Spokane, owns the Barr-Tech facility jointly with Jack Gillingham, of Cheney. The company currently employs eight people, but says it expects to employ as many as 40 once that next phase is constructed and the plant and its power-generating anaerobic digester are running at an optimum level.

"It'll be a year before we get to that point," Larry Condon says. "We just wanted to see that our initial projections are panning out, and they are. This whole facility will handle 230,000 tons of material (a year). The digester only needs about 40,000 tons."

Barr-Tech's intent is to draw yard, food, paper, wood, and other organic waste—such as grease, fats, oils, and bio-solids—to the facility from private-sector and government generators and to use those feedstocks to create high-grade compost, renewable energy, and fertilizer for fruits and vegetables that eventually could be grown in onsite greenhouses.

The company hopes to attract waste from a sizable Eastern Washington area, but it's touting in particular its proximity to the Spokane metropolitan area and how that translates into transportation-related cost savings for big waste generators here.

"We're basically as close as you can be with a facility like this," Condon says.

The methane-producing digester it plans to build is expected to be capable of producing at least two megawatts of electricity, or enough to power 1,500 homes. Inland Power & Light Co., of Spokane, announced late last year that it had signed a power purchase agreement with Barr-Tech that gives Inland Power rights to all renewable energy generated by the plant.

Having the composting facility and the digester operation located on the same site in a symbiotic, part aerobic-part anaerobic system design will enable Barr-Tech to accept a larger, much more diverse waste stream than would be possible with composting alone, Condon says. It also will give the facility greater profit potential, he says.

The Barr-Tech facility will augment and round out services offered at the Spokane Regional Solid Waste System's waste-to-energy plant, at 2900 W. Geiger Blvd. just west of Spokane, and at a $12 million recycling facility that Houston-based Waste Management Inc. announced earlier this month it plans to build here, Condon asserts. Waste Management said it hasn't decided yet on a site for that plant, but hopes to open it by late next year.

The waste-to-energy plant takes materials that aren't recyclable, the Waste Management facility will take what are called durable recyclables such as metals and plastics, and Barr-Tech will take organic materials, Condon says. Together, the three operations will have the ability to convert virtually all of the waste generated here for beneficial use, Condon contends, adding, "So far as I know, that's not being done anywhere else in the country."

Because Waste Management already has a well-established waste-collection network in place here, Barr-Tech will contract with that company for the delivery of organic materials to its facility, he says.

He declines to talk specifically about the fees Barr-Tech charges clients for its organic waste removal and recycling services, saying they vary widely depending on a number of factors. Generally speaking, though, he says, they equate to "about a 20 percent to 30 percent savings over just going to the dump, which is amazing. What we're finding is we're saving everyone money."

Barr-Tech faces competition as it goes after organic waste in that emerging market here. Spokane Valley-based Yoke's Washington Foods. Inc., for example, is using Sunshine Disposal & Recycling, of Spokane, to truck its separated organic waste to a Royal Organic Products facility in Royal City, Wash., southwest of Moses Lake. There, it's converted to compost, then sold to landscapers.

Condon says he expects Barr-Tech's proximity to the Spokane-Coeur d'Alene area, its ability to return recycled materials to the local market, and its integrated plant design, for which it is seeking patents, to be big plusses that will help it attract long-term customers.

Construction of the power-generating portion of its facility will culminate a four-year process that Condon calls "lightning speed," given the number of regulatory, financial, and other hurdles that Barr-Tech had to clear.

The company worked with the Lincoln County Economic Development Council and the Odessa Public Development Authority to identify a site for the organic-processing facility and to corral $2 million in Washington state Community Economic Revitalization Board financial support for the project. That support includes a $1.5 million loan and a $500,000 grant.

Barr-Tech bought the land for the facility from Whitworth University—it was part of 8,500 acres that former state Sen. Scott Barr donated to the school years ago—and then donated it to Odessa Public Development Authority, Condon says.

Barr-Tech is using technology developed by Engineered Compost Systems Inc., of Seattle, in its composting facility, and its energy-producing anaerobic digester will use technology developed by Wisconsin-based GHD Inc. Condon says. Andgar Corp., of Ferndale, Wash., which has built a number of digesters for GHD, also will build the one here, he says.

Barr-Tech is the anchor tenant in what's envisioned to be a larger environmentally focused development called the Barr Bio-Industrial Park. Condon says three other prospective tenants currently are "looking real hard" at locating there.