Beer Here: Entrepreneurs seek to capitalize on love of suds in coronavirus era 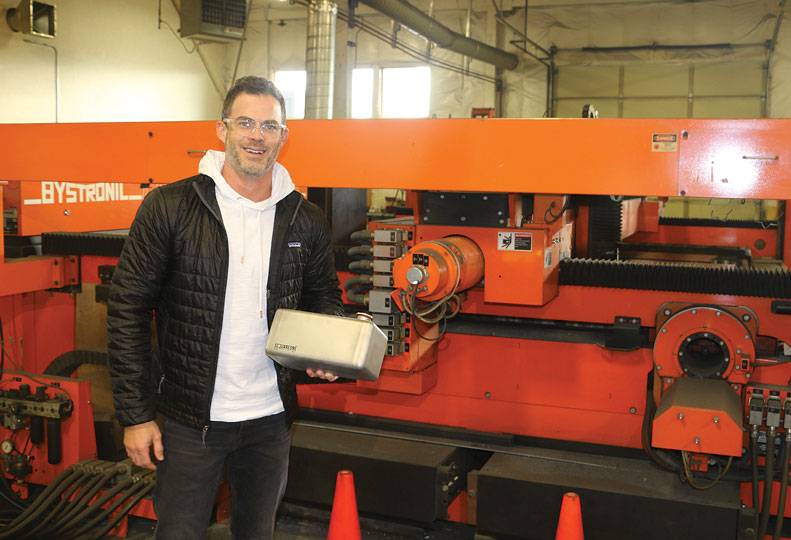 Tim Loucks and Tyler Cossey have never met, but the two Eastern Washington University business school alums have something in common: They’re trying to find their riches in beer.

Loucks, 42, is looking to innovate keg storage of brews, and Cossey, 29, is building a brand delivering it.

While the U.S. has started rolling out an approved vaccine for COVID-19, both Loucks and Cossey say they believe many people will continue to shelter at home through 2021. That will continue to fuel demand for beer and other spirits at home, they say.

A national survey released at the end of September found that the overall frequency of alcohol consumption increased by 14% among adults over age 30, compared to the same time last year. The results were published as a research letter in the journal JAMA Network Open.

Loucks, founder of Square Keg LLC, contends he has seen no shortage of beer going to waste in kegs, which traditionally have ranged in size from just over five gallons to 15.5 gallons. At personal and private functions, Loucks says it’s not uncommon for gallons of beer to go undrunk.

So Loucks, who calls himself an avid beer connoisseur, three years ago set out on a mission to invent a more personalized beverage-storing device—and for the at-large beverage industry, a more practical brand of keg.

“First, I wanted to create a personal-size keg that can easily fit on the shelf of your refrigerator,” says Loucks, who has spent most of his professional career in business and sales.

Three years after its founding, Square Keg has started mass production of its one-gallon, stainless-steel SquareOne kegs. His website, thesquarekeg.com, is taking orders for the kegs, priced at $200.

As Loucks ramps up for mass production, thus far, a “few hundred” orders have been placed, and he expects those to be delivered to customers by year-end, he says.

Each of the individualized designed kegs comes equipped with its own pressurized CO2 cartridge, which prevents stored beverages from spoiling. Loucks says SquareOne is ideal for storing beer, wine, mixed drinks, cold-brew coffee, and kombucha.

SquareOne Keg is equipped with a wide-open mouth into which drinks can be poured into the single-gallon keg without spilling.

Loucks says he’s now more aggressively pursuing investors. His effort to date largely has been self-funded, and he declines to disclose what he’s spent.

A Kickstarter campaign earlier this year proved unsuccessful, raising $60,454 and falling short of the $150,000 goal. With Kickstarter, the goal fundraising amount must be reached for a campaigner to receive anything, so the effort didn’t generate any capital for Square Keg.

Even so, Loucks says he gave supporters the opportunity to pre-order direct at a discount.

“And many did just that,” he says.

Beyond the SquareOne mini keg, Loucks has his sights set on mass producing an 18.5-gallon full barrel square keg, a 10-gallon square pony keg, and a 6.5-gallon small keg for restaurants and taverns in preparation of government restrictions on societal gathering being lifted.

Loucks is banking on the fact he thinks the beverage industry will recognize the enhanced efficiency of storing and transporting square kegs instead of the traditional circular aluminum cannisters.

By his estimation, restaurant and tavern owners, and beverage makers and distributors, could increase their inventory capacity and potential revenue by 17% to 23%, depending on keg size.

Loucks has gotten this far in his effort through a series of mutual contacts who eventually introduced him to Chris Henjum, the owner and operator of Hydrafab Northwest Inc. The Spokane Valley-based fabrication and manufacturing company is located in the Spokane Business & Industrial Park, at 3808 N. Sullivan.

Loucks says he’s paid Hydrafab to design the SquareOne mini keg and for its subsequent production. He and Henjum recently started discussions about Square Keg leasing designated space within Hydrafab, and they’re exploring automating several of the processes of its manufacture, he says.

Loucks says he’s consulted with bar and restaurant owners who have given him positive feedback regarding his idea.

One of those individuals is Spokane restaurateur Matt Goodwin, who called Loucks’ idea an “extremely cool and efficient concept.”

However, Goodwin says entry into the mass keg market will present some high hurdles.

“There are already millions of kegs in distribution that are round,” Goodwin says. “They’re already there. It could be hard to just suddenly work them into your operations.”

The practice of storing beverages in round kegs is hundreds of years old. Goodwin says it will require a great deal of education on Loucks’ part to convince breweries, distributors, and restaurateurs to change such a longstanding practice.

With that said, Goodwin says he likes Loucks’ business strategy.

“He’s not going in to tackle the keg industry first,” he says. “The personalized keg is an absolutely brilliant idea, and that, I think, will be an effective entry point for him into the keg industry.”

Loucks graduated from Shadle Park High School on Spokane’s North Side. After high school he went into the construction and concrete fields before eventually moving into dental and medical supply sales.

He completed his undergraduate degree in interdisciplinary studies with an emphasis in business and science from Eastern Washington University in 2012.

“I knew since I was a kid that I was a sales guy,” Loucks says. “I was that kid who had to sell more candy bars than my classmates.”

As the years have gone on, however, the desire to be his own boss only gets stronger.

“I’m tired of working for the man,” Loucks says with a laugh. “My goal is to be my own boss. I foresee this effort being national. ... international. Professionally, I’ve got everything riding on this.”

Knowing something about the merits of working for himself, Cossey launched Spokane Beer Delivery in late 2019, not long after the Washington state Legislature approved allowing businesses to make home alcohol, beer, and wine deliveries.

“Before the pandemic, I was seeing customers walking or taking the taxi to come in to get beer,” he says. “When the law changed, that’s when I saw an opportunity.”

He made 67 deliveries in the first month after the law was enacted. In April, after COVID-19 had spread to the U.S., he made nearly 1,700 deliveries, Cossey says.

Since then, monthly numbers have leveled off, and Spokane Beer Delivery has averaged 1,300 deliveries a month.

Alcohol, beer, and wine deliveries now make up 25% of overall business revenue. And so far, Cossey doesn’t know of any other competitors.

Delivery orders come in as early as 7 a.m. He’s purchased three company cars, and he and two other employees handle the lion’s share of deliveries, Cossey says.

Within the area, Spokane Beer Delivery average times are just under a half-an-hour. Delivery fees are 79 cents per mile, and a minimum order is $20 before tax and delivery fees, he says.

With the help of family members and the former owner, Cossey formed The Store on Thor in early 2016 and assumed the building lease from the previous owner. His convenience store and gas station employ two dozen people, most of whom work full time.

Cossey, who grew up in the Freeman community south of Spokane, and has a degree in business management from EWU, says he started his first landscaping business in high school.

“I always wanted to own my own business; I never wanted to work for someone else,” he says.