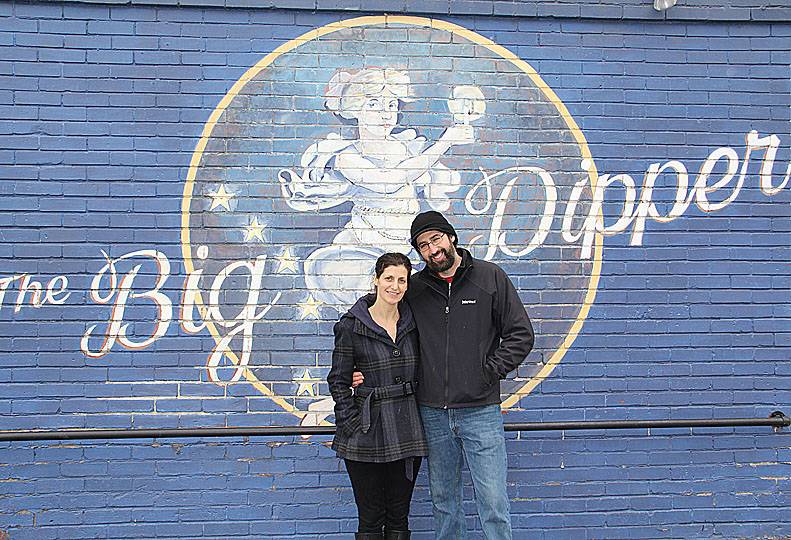 -—Lucas Thayer
Dan Hoerner and his wife, Dawson Smith-Hoerner, are going in with another couple to reopen the Big Dipper as a music venue. 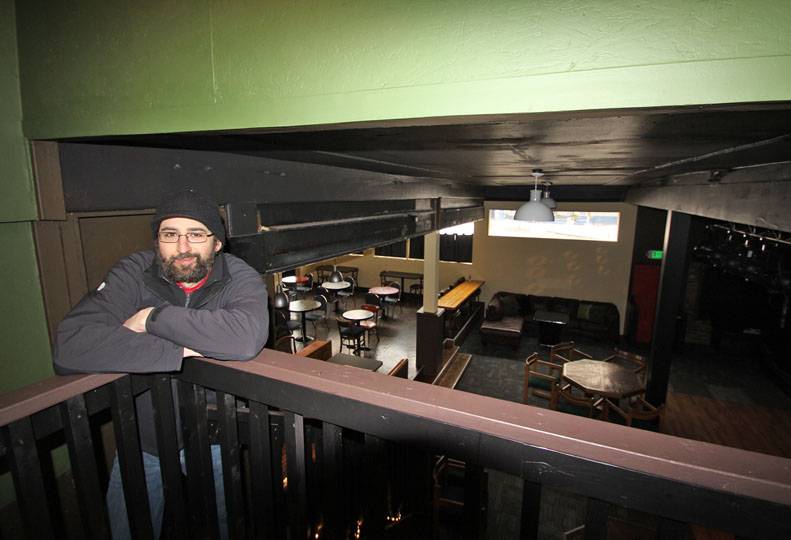 -—Lucas Thayer
Big Dipper LLC co-owner Dan Hoerner hopes to install a sprinkler system in the building so the company can increase its maximum guest capacity.

The blue building sits at the northeast corner of Second Avenue and Washington Street in downtown Spokane. A newly-renovated painting of a young woman sitting on the constellation Ursa Minor, more commonly known as The Big Dipper, graces one wall.

For those who lived in Spokane during the late 1980s and early ’90s, the building is more likely to conjure memories of a thriving, all-ages alternative rock music hub than images of the night sky. Since The Big Dipper closed in 1995, a few others have tried to operate live-music venues in that space, but nothing has taken root. Empyrean Coffee House, the most recent tenant, closed its doors in early 2011 after operating for a year in that location.

Enter Dan Hoerner, Troy Brower, and their wives, Dawson Smith-Hoerner and Annie Grinnell. The two couples have formed Big Dipper LLC and currently are operating the property as an event-rental facility. The company has a wedding reception, a few birthdays, and a couple of rock shows already under the belt. It plans to open a music venue and bar there May 1, contingent upon receiving approval of its liquor license. Once up and running, Big Dipper will employ six people, including the four owners.

The establishment is expected to host rock shows for all ages some nights, and Hoerner says he wants to capitalize on the venue’s versatility with poetry slams, open mics, art shows, and other events.

The front door opens to a bar with a kitchen in the back, a seating area, a dance floor and a stage, with couches flush against the walls for lounging. The back door opens to a courtyard where patrons can smoke. The stage has side doors that lead to two lounges for visiting bands, and a load-in room where the bands can bring in their equipment off the street.

In preparation for the opening of the bar, Hoerner is focusing on emphasizing what he calls the “experiential qualities” of the venue. With advice from a dozens of restaurateurs, he and Smith-Hoerner have crafted a menu that will include pizza, handmade pretzels, loaded grilled-cheese sandwiches, and antipasto plates. The drinks will be made with a palate of fresh-pressed juices.

While Hoerner has no experience owning a bar or music venue, he says he has seen the operation of a venue hundreds of times “from the other side.” His name might be familiar to ’90s music aficionados; he was the lead guitarist for Sunny Day Real Estate, an alt-rock band. After college, he toured the world for nearly a decade with the band, recorded four albums, and helped lay the foundation for the emo music genre. But before that, he was a Spokane native just out of high school, playing in venues he wasn’t old enough to walk into otherwise with bands such as Happy Dead Juans and Third House Down.

Hoerner says he’s confident that Big Dipper will be successful. The business is opening with no debt and a “sweetheart lease” on the building, with a lease-to-own agreement in the works.

The team is committed to restoring the Dipper to its former glory, Hoerner says. It has spent about $50,000 renovating the interior, including refitting plumbing, installing new linoleum and hardwood flooring, rewiring the torn out electrical system, and redecorating, he says.

The couples didn’t know until they opened the doors for the first time last fall just how far the structure had fallen into disrepair.

“The building looked as though several bombs had gone off on the inside,” Hoerner says. “It looked like Kosovo in the mid-90s.”

He says the plumbing was in shambles. Scavengers picked over the building after the latest failed project, tearing out the drywall to pillage the copper wire from the walls. Hoerner and his team drove out squatters living in the building, changing the locks, but it was several weeks before the former occupants stopped trying to come back.

One challenge the company faces is what Hoerner calls “The Big Dipper conundrum.” Without installing a fire sprinkler system, the building’s maximum occupancy is 110 people.

In 2009, the city of Spokane mandated that businesses classified as nightclubs must have interior fire-sprinkler systems.

“The bar for getting fire sprinklers in is so high, because it’s such a huge amount of money,” Hoerner says of the sprinkler system’s price tag, which he estimates is about $50,000. “It’s kept all the small entrepreneurs from being able to achieve it.”

Hoerner hopes to raise the funds for the sprinkler system through the online crowdsourcing website IndieGoGo.com. Big Dipper launched its campaign Feb. 22 and is scheduled to close it April 23. As of earlier this month, the company had raised about $4,000 of the $50,000 it’s seeking, according to the Indiegogo website.

The campaign received attention from Rolling Stone magazine, which wrote about it and the former rocker heading it up.

Hoerner retired from the public life in 2001 after Sunny Day Real Estate dissolved. He and his wife have spent the past 13 years raising their three children in the city where he grew up. The Big Dipper is one of the places that are part of the fabric of Spokane, like the Flour Mill or the Carousel, he says. And, he adds, it’s a great venue.

“You can get up close and personal with the band and feel pretty intimate,” Hoerner says. “I think that’s important, I like to be able to see the bands when I go to the club.”