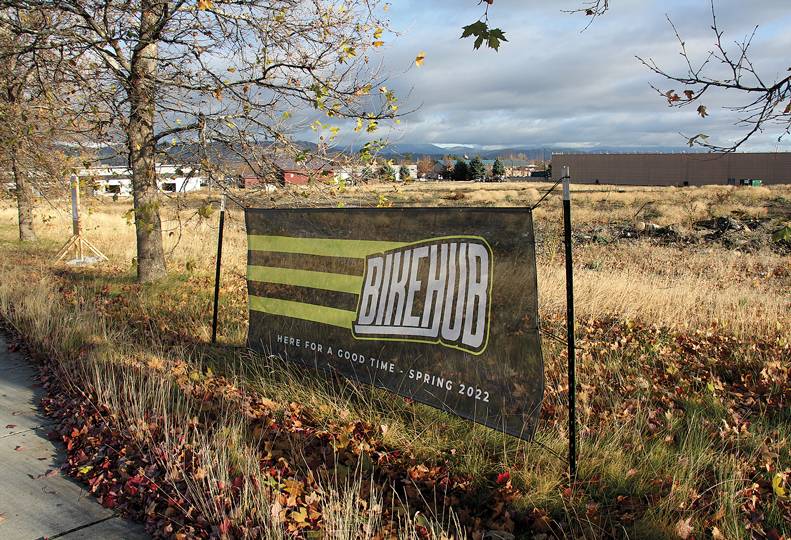 -Erica Bullock
The Bike Hub LLC’s planned new store in Liberty Lake is expected to be its fourth overall.

The project site is located to the north of and adjacent to Liberty Lake-based Trailbreaker Cider, which is on the west side of Madson Road and across the road from STCU’s Liberty Lake branch.

The Bike Hub, which is owned by Andreasen and John Abernathy, purchased just over 2 acres of land in April for $400,000 in an area zoned for light-industrial uses, according to tax documents on file with Spokane County.

Andreasen says the planned development will be built in phases. The estimated cost to construct phase one, together with the purchase of the land, will be about $2.5 million.

Preliminary site plans for the project show phase one will be a 7,500-square-foot structure built to suit three businesses. Phase two will consist of a 6,500-square-foot building. The entire project will cover just over 14,000 square feet of land at the site.

Andreasen says two other tenants are secured for phase one.

“We have Radio Brewing, which will have a taproom in one part of the building, and then a new barbershop called Red Oak will be in there as well,” he says.

Andreasen says he plans to have five or six employees at the new bicycle retail store. Environmental documents estimate there will be 10 to 12 employees to work at the site for all three retail businesses.

Construction of phase one of the project is expected to start by the beginning of January, Andreasen says. “We’re hoping to be open and operational by early summer.”

According to site plans, construction of phase two will begin in the spring and conclude in August.

The site will be accessed via a driveway off Madson Road and will have 43 parking spaces including two accessible spaces, according to site plans. A concrete pad will be installed next to the phase one building to hold a transformer for a future vehicle charging station.

A State Environmental Policy Act checklist shows about 600 yards of gravel base will be used under slabs and paving surfaces. About 2,000 yards of dirt will be moved as well.

The Bike Hub opened its first store in Spokane Valley in 2009. The other Bike Hub stores are in Spokane’s South Perry District and in downtown Spokane.