Bikes for the urban jungle 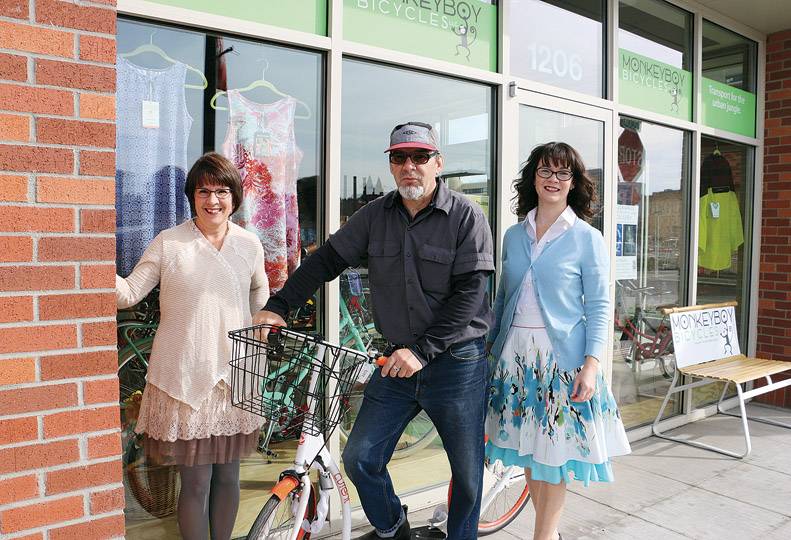 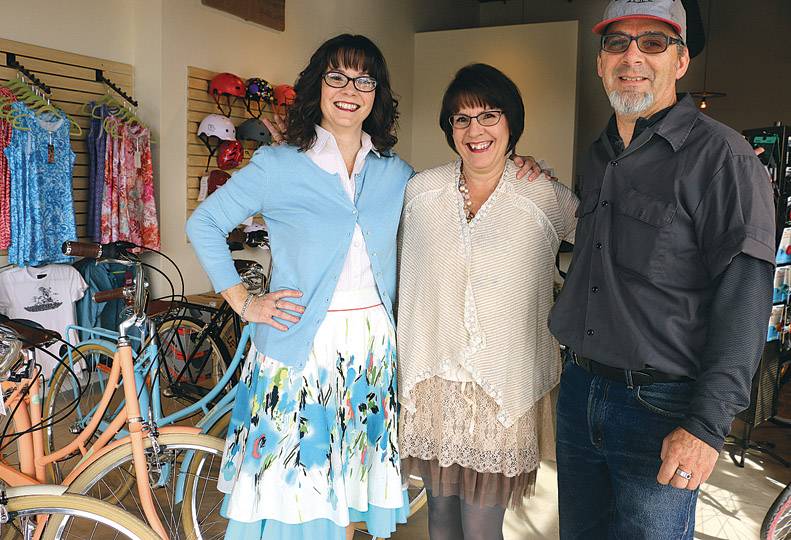 At present, the city of Spokane can’t hold a candle to cities such as Portland and Seattle for accommodating commuter biking and bike infrastructure, but the owners of Monkeyboy Bicycles, three Spokane-based siblings, think they’re well positioned to be at the forefront of that retail market segment here when the time comes.

And they believe the time is coming sooner rather than later.

“Transport for the urban jungle,” the tagline for the business that’s owned by Lynn Ellis, Don Gibson, and Patti Nepean, represents exactly how the shop has positioned itself.

The Monkeyboy moniker is Ellis’ son’s nickname—adopted as the store name. Ellis says jokingly, “Don is known as the monkey’s uncle.”

An illustrated diminutive, black-and-white monkey swinging from a tire, is part of the business’ branding, and its business cards are reminiscent of playing cards once used to produce a motor-sounding click clack when attached to bicycle spokes.

In 2011, Gibson started a mobile bike-repair business, and when he got extremely busy with that, Ellis says she knew it was time to open a storefront. In 2013, Ellis approached her brother and sister with the idea of opening a brick-and mortar store, and the Garland District store was born.

But after a year at 606 W. Garland, the owners decided the store wasn’t close enough to its target market, which they have identified as commuter bikers and families that bike. The trio of owners closed the Garland location in December and opened in a 700-square-foot space at 1206 W. Summit Parkway, an area that the owners think will generate more foot traffic.

In terms of revenue, the owners say the company isn’t quite to the break-even point. Still, they believe the business will thrive, even though it may take some time.

Things have changed for small business owners, they say.

“People used to say it took three to five years to create a business and break even. We think it takes five to eight years nowadays with the way the economy is,” says Ellis.

Mountain bikes and road bikes are nowhere to be found in the little store on the corner of West Summit Parkway, roughly between and Cedar and Adams.

What can be found at the store is a selection of city bikes manufactured as far away as Finland and Australia, as well as bicycles from several manufacturers based in the U.S., such as Brooklyn Cruiser bicycles that offer several models in different gearing options. The Cruisers come in traditional colors as well as creamy pastels.

Monkeyboy also sells Papillionaire bicycles, which are Australian, vintage-style bikes that harken back to the 1940s and ’50s.

The store offers destination clothing, commuting accessories, helmets, and all the basics to get started on bike commuting and recreational rides.

The research the owners have done on bicycle retailing led them to offer bikes that aren’t offered by other bicycle outlets in the region, Nepean says.

“The research told us that we want to make sure we’re getting products here that other people aren’t carrying,” she says.

“We think these bikes are a viable option for transport … they’re functional, safe, arty pieces, and are still the old model of an upright bike like we grew up with,” Nepean says. “The bikes are not like a 10-speed where you have to bend your spine and put your head down. You don’t get a crink in your neck when you ride these.”

In addition to bicycles, the store also carries other two-wheeled options such as Current Sidewalk Scooters, oversized scooters with a dual braking system that offer a different kind of ride on city streets. Other bikes include Linus Lil Dutchi and Roadster, and Kazam Balance Bikes, Ellis says. Balance bikes are small bikes without pedals that enable children to develop balance before attempting to ride a bicycle with pedals.

Since the shop can’t buy in volume, it also couldn’t get bigger manufacturers to sell to it, Nepean says. The store carries only two or three bikes of one brand at any given time.

“We’re not buying 30 bikes at a time like other bigger retailers,” she says. “We don’t have a lot of floor space.”

“All the gearing in the bikes we carry … are inside the rear hub. There’s no derailing, so they last longer,” Gibson contends, adding, “They are also easier to maintain, and you don’t lose your chain.”

Nepean says the owners believe it’s important to also keep the weight of the bikes as low as possible.

“None of the bikes weigh more than 32 pounds,” she adds. “We thought that was important because if you have an average gal who lives on the second floor and has to carry her bike up and down stairs, by the time you get all the commuter gear and everything … it’s too hard if the bike is heavier than that.”

She adds that other road bikes and mountain bikes can weigh in at 40 to 45 pounds.

The lowest-priced adult bike in the store, a Current sidewalk scooter, is $289, and prices range up to about $800 for other types of commuter bikes. Prices for children’s bikes vary, starting at $100 for the Kazam balance bikes.

Monkeyboy’s intent is to encourage residents of Spokane and the surrounding area to discover the benefits of bicycle commuting, the owners say, as well as to reignite the sheer pleasure of recreational cycling reminiscent of their childhood.

As avid bicyclists, they say they began to notice a lack of stylish yet practical bicycles, and specific commuter gear in Spokane.

Momentum Magazine, a cycling lifestyle magazine, inspired them as well, Nepean says, and family and friends encouraged the three to open a store.

“We didn’t outgrow them. We just got better bikes,” says Nepean, who comes to the business with many years of experience in retail management. She now arranges displays in the shop and keeps connected with customers via social media.

Ellis’ past includes office management in higher education and now she does the administrative duties for the business. Gibson is the bicycle repair specialist, as well as the assembly person when new inventory comes into the shop.

The three siblings say although they’ve never worked together, it hasn’t been difficult to manage.

“We all have grace and patience,” jokes Gibson, adding, “We all have different skills, and we couldn’t do it without one another.”

Gibson says commuting by bicycle is still in its infancy as a popular activity in Spokane,” and they believe part of their job is to inform people about urban transport.

“We have to educate people on the value of using urban transportation with this style of bike. We don’t carry mountain bikes or road bikes; it really is transportation for the urban jungle,” he says.

In Spokane, lots of people ride bikes, but only a small group are commuter lifestyle riders, Gibson says.

He is a member of the city of Spokane’s bicycle advisory board headed up by Louis Meuler, the city’s interim planning director, who says the data on bicycle commuting isn’t good.

The 2010 American Community Survey from the U.S. Census Bureau estimates 1.8 percent of the population here bikes to work, with about 80 percent of them being men and 20 percent women, he says.

He predicts the infrastructure will improve as the city continues to install dedicated bicycle lanes, adding that other communities have experienced increased bicycle commuting when buffered bike lanes make riding safer.

The store offers basic accessories to get started commuting such as helmets, bike racks, and baskets. Carrying reasonably-priced merchandise, some of it local, was important to the owners. “Accessories are affordable but good quality and we’ve added some bike-friendly clothing,” Ellis says.